The first published report on AIDS (acquired immunodeficiency syndrome) was published in 1981 and concerned the case of five men treated for pneumonia. In 2019, 1.7 million new HIV infections, the virus that causes AIDS, were reported by the WHO. Currently, there is no cure for the disease. Only heavy treatments allow sick people to have a more or less normal life. France is one of the main international players in the search for a preventive vaccine. The Vaccine Research Institute (VIR) is currently conducting clinical trials on volunteers.

This virus, originally found in monkeys, is responsible for the disease called AIDS. It is a lentivirus of the retrovirus family. This means that when we observe it, we first see a sphere with several keys on its surface that allow it to attach itself to cells to better contaminate them. Beyond this first barrier, a second one is detected containing and protecting proteins and genetic material. This genetic material is not in the form of DNA (like us), but of RNA. The RNA is one of the steps allowing to produce proteins from the DNA. 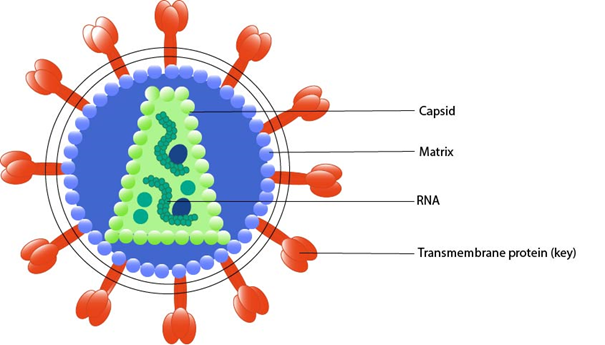 Diagram of the HIV virus

The "goal" of HIV is to infect cells of our immune system (our soldiers protecting us against intruders) to better reproduce. As for the surviving cells, the virus sends them a signal so that they are eventually destroyed. In humans, the cells targeted are CD4+ T lymphocytes, macrophages and dendritic cells. All of them have the role of protecting us in case of an attack. HIV therefore gradually destroys our defenses and allows other diseases to develop because the soldiers protecting our body no longer exist or are very weak.

For the invasion to take place properly, the virus attaches itself to the poor cell that is about to be transformed into an HIV factory. To do this, the virus has different keys on its surface. These are there to fool the cell into thinking that it is acting as an ally and not as an enemy. The great difficulty for scientists and our little soldiers of the immune system is that HIV has a great capacity to change its keys and adapt.

Once contact is made, the virus inserts its genetic material, RNA, as well as its proteins into the cell. The HIV proteins will "transform" this RNA into DNA and take it into the nucleus of the cell. From there, the HIV DNA will integrate with our DNA, which through various mechanisms will allow the production of new viruses. Brand new viruses will then bloom like flowers on the membrane of the contaminated cell. 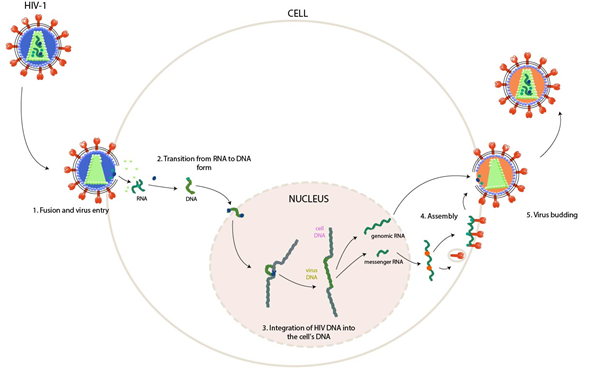 Diagram of the reproduction of the HIV virus within our cells

The Arsene Lupin of viruses

HIV-1 (human form of HIV) has a very high capacity to mutate and therefore to change its identification keys. The immune system no longer knows who it is and whether it is friend or foe. The problem is similar for the development of a vaccine. When a vaccine is produced, it must be able to recognize the dangerous element in the body. The vaccine will therefore help our defense army (the immune system) by learning to recognize this enemy. But when the enemy changes its identity very often, the challenge is quite different...

Resistance is on the march

Last month, the Vaccine Research Institute launched the first clinical trials of a preventive vaccine against HIV on volunteers. The aim of this vaccine is to avoid any transmission of the virus through prevention. Its name: "CD40.HIVRI.Env". It consists of the injection of proteins, monoclonal antibodies that usually target and neutralize intruders in our body. In this case, these antibodies will attack the dendritic cells, a category of our soldiers very often invaded and used by HIV. 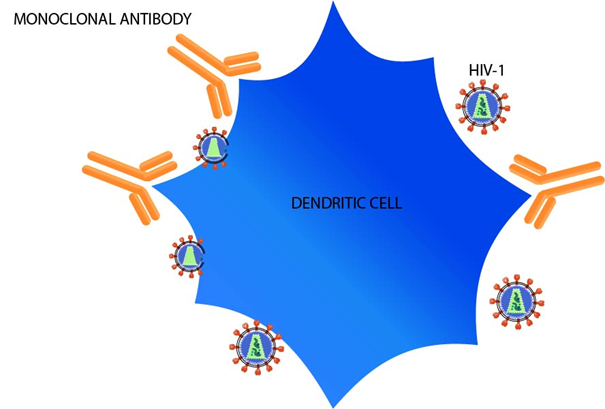 Diagram of an HIV-infected dendritic cell targeted by vaccine antibodies

This is the first time that a vaccine has targeted this type of cell. It is the only one currently in clinical phase I, which means that researchers and doctors are evaluating its toxicity or not. But that's not all. It is also currently being studied in combination with a second DNA vaccine, which is already in Phase II/III.

The purpose of a DNA vaccine is to inject a piece of DNA containing part of the virus code directly into the cells. The DNA will then be integrated into our own DNA to allow better recognition of the virus by our defense troops.

The clinical phase II/III allows us to determine the best dose of vaccine to administer to patients and to control its effectiveness with a placebo (a decoy).

This clinical trial lasts 12 months and includes 72 volunteers aged 18 to 65.

When Harvard gets involved

AIDS is a global health issue. While we are currently experiencing a pandemic, it is important not to overlook the other diseases and conditions that plague the world and kill millions. In 2017, the IMBOKODO trial was launched by the Harvard Medical School team, led by Professor Dan Barouch and the pharmaceutical industry Janssen. Another type of vaccine, called "mosaic", was developed here. This one is composed of RNA containing the code for different HIV proteins, all packaged in a virus "shell". Its "mosaic" type allows it to contain multiple codes allowing it to identify several variations and mutations of keys set up by HIV to counter the defense systems of our body. It is thanks to this technique that the teams of researchers and doctors hope to identify and counter several mutations of the virus. The trial is currently taking place in South Africa on 2,600 HIV-negative women to evaluate its effectiveness and safety. The results of the study are expected this year. These are glimmers of hope that will one day turn into real solutions to counter this virus.