The international health crisis that we are experiencing has turned the lives of all communities upside down. Today, more than ever, viruses are at the forefront of our news. But these small organisms are far from having delivered all their secrets to scientists. Every year, new specimens are discovered and they contribute to our knowledge of evolutionary biology and of their reign over the living organisms. Among these latest discoveries, the Medusavirus, a species of giant virus from Japanese hot springs, has inspired new hypotheses on the origins of life.

Viruses are a very diverse family of microorganisms whose main characteristic is to penetrate the cells of at least one organism to complete their reproductive cycle. Each main branch of life (eukaryote, bacterium and archaea) is likely to be the host of a viral species.Like most of the giant viruses, the Medusavirusis a parasite that infects an amoebae.Acanthamoeba castellanii were used as their test hosts in the laboratories of the University of Tokyo.

A virus that petrifies its victims

The findings on the mode of infection of this warm-water virus were a great surprise to virologists, who used them as inspiration for the naming of the new virus. The name "medusavirus" is a direct reference to the Greek mythological creature Medusa, who turned humans into stone when they locked eyes with her. And for good reason, when the host amoeba is infected, it sometimes gets covered with a thick, rigid crust, as if it had turned into a statue.

Medusaviruses join the young family of giant viruses. Discovered in 2004 by the Marseilles team of Didier Raoult, giant viruses (or giruses) have redefined our representations of viruses. Their dimensions and genomic machinery (the set of molecules that maintain and compose the genetics of each specimen) have challenged the scientific community with their complexity and their large dimensions, reaching up to 2000 times the size of some "classical" viruses. It is quite possible that their discovery was delayed because scientists confused them with small bacteria during their observations. 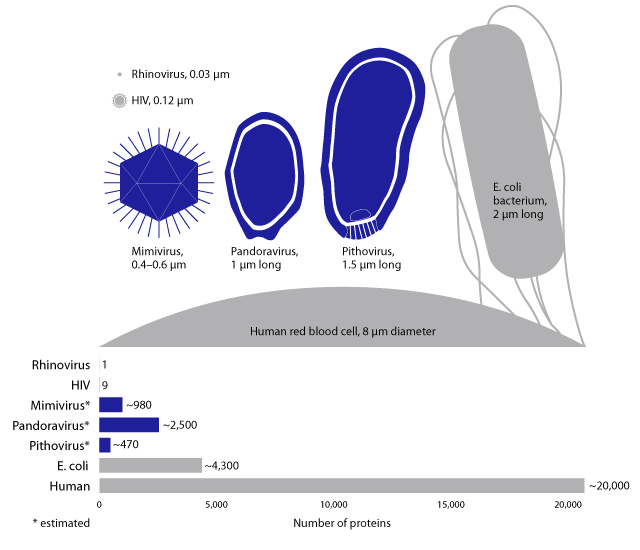 A virus can be considered a girus if it has a diameter greater than 0.2 μm and a genome formed of at least 0.3 million base pairs. These base pairs, structural units of genes, will code the proteins of the subject and for giant viruses, their genetic material codes up to 2,500 proteins. In comparison, the human genome encodes some 30,000 proteins.

The medusavirus nestles in the nucleus

The replication cycle of viruses occurs after entering the cell and allows them to multiply inside by using part of the host's biological equipment. The very principle of the viral replication cycle illustrates their parasitic nature The viral biological components will take the place of those of the host and lead the cellular machine to work for the virus by making new virions (generic name for a viral structure, whether it is simple or very complex). Each species of virus presents a mode of replication which is specific to it, and that of the medusavirus takes place inside the nucleus of the cell. 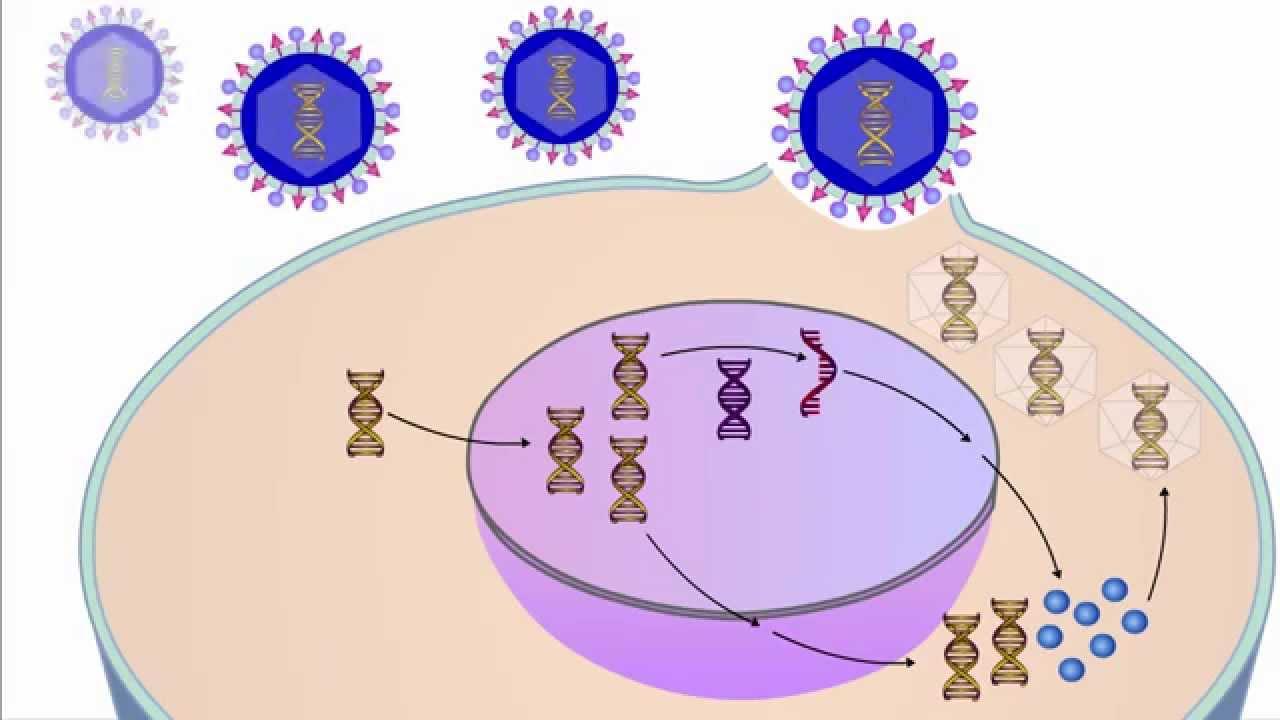 Simplified diagram of the replication cycle of a virus in the nucleus inside its host. RicochetScience, Youtube, 2014

With its entrance into the cell, the virus also brings viral enzymes, which will also be duplicated to complete future viruses. Enzymes are very large and complex proteins that each catalyze a specific chemical reaction. In giant viruses, two enzymes are always present: RNA polymerase and DNA topoisomerase II. But to the surprise of scientists, they are both absent in the medusavirus which depends totally on the host nucleus to provide it with these enzymes essential to its replication cycle.

On the contrary, the medusavirus is, among the giant viruses, the only one to gather the 5 homologous proteins the closest in structure to histones. Histones form a complex of 5 proteins very conserved during evolution. From archaea to large animals, this complex serves to compact DNA strands, as well as to wind and unwind them to control the order of replication carried out by the DNA polymerase (another very important enzyme). This phenomenon, visible under the microscope, forms a string of pearls where the "strands" are areas without histones, the DNA is exposed and can interact with other molecules while the "pearls" are knots of DNA densified around the histones, inaccessible and protected. 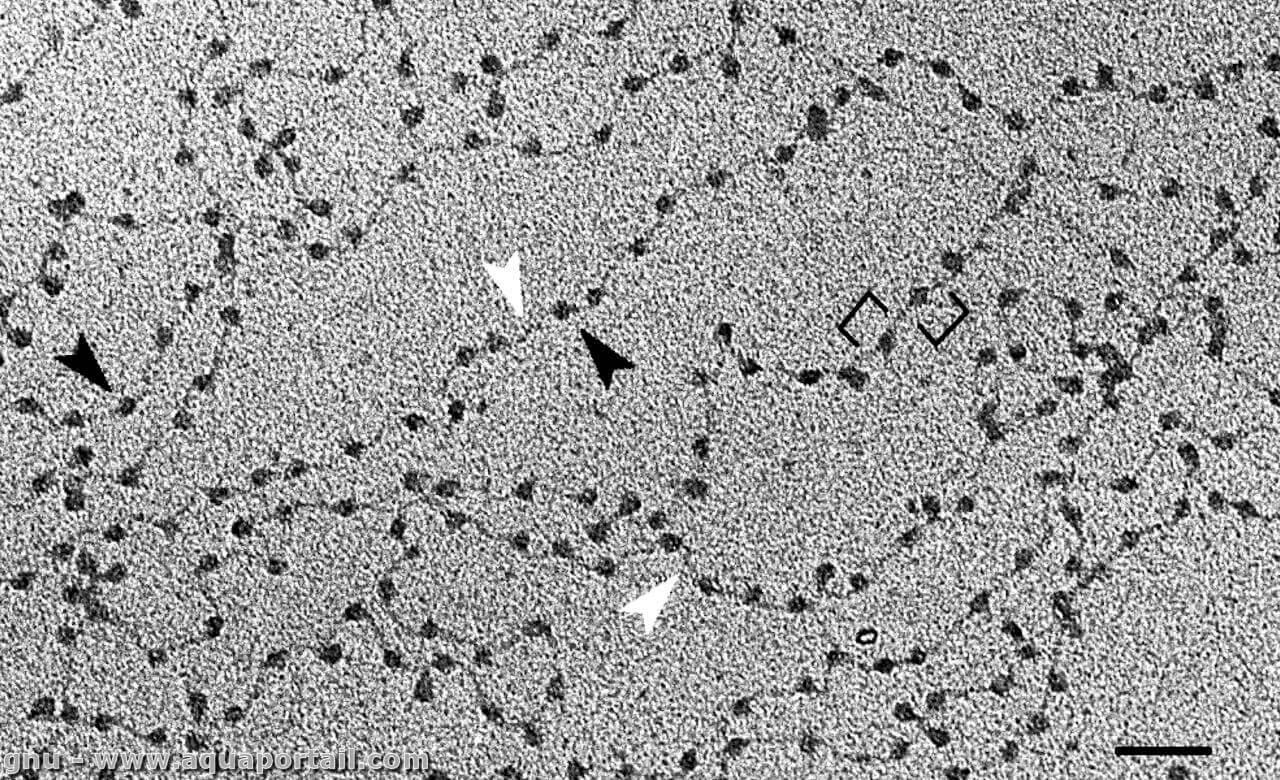 The nucleus, a very old virus ?

The structure of each virus is fundamental to be able to classify the different specimens and compare them to other models, especially to measure their evolutionary proximities. The latter are studied in order to reconstruct the genealogy and the bonds of kinship between different specimens but also with other organisms and non-viral species, showing a certain closeness at a given moment in history.

Thus, a genetic similarity like the one presented by the presence of histones brings the medusaviruses closer to the ramification of the phylogenetic tree of the eukaryotes. Moreover, their viral DNA polymerase is also very similar to that of eukaryotes.

As it is accepted that the mitochondria found in eukaryotic cells come from an assimilation of an ancestral bacterium, the structure and notable proximity of the nuclei and some giant viruses lead scientists to theorize on a potential viral origin of the nucleus as we know it today. This would imply a fundamental role for viruses in eukaryogenesis and the history of life in general.

7. Takemura M (2020) Medusavirus Ancestor in a Proto-Eukaryotic Cell: Updating the Hypothesis for the Viral Origin of the Nucleus. Front. Microbiol.
https://www.frontiersin.org/articles/10.3389/fmicb.2020.571831/full