Obesity is the fifth leading cause of death worldwide, and fourth leading cause of death in Europe. Every year, more people die from obesity than from drugs and alcohol combined. With calories being more easily available, obesity continues to grow, tripling since 1975! In 2016, more than one-third of adults worldwide were overweight, and nearly 15% were obese. What makes this problem so prevalent and persistent?

Losing weight might be the most frustrating activity for every overweight person, and a great cause of stress, judging from personal experience. It is a medical condition that leads to variety of other conditions including cardiovascular diseases, type 2 diabetes, obstructive sleep apnea, certain types of cancer, osteoarthritis, and many others. It is mainly caused by poor diet and physical inactivity, with a small percentage of people having contributing factors like genetic susceptibility, medications, and mental or endocrine disorders. 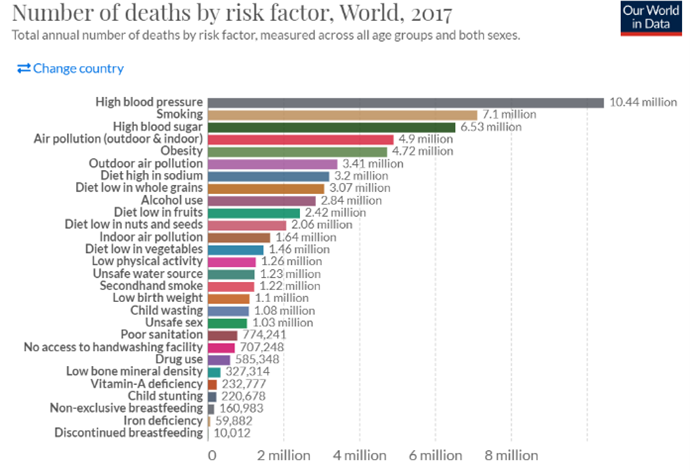 Figure 1: Number of deaths by risk factor in 2017. Graph on the left represents Western Europe, and the one on the right the whole world.

Social and psychological impact of obesity

Being overweight has its own set of problems, besides the obvious ones. Regardless of the cause, obesity leaves a permanent impact on the mental state, as well as the physical. Food entering the stomach, especially fats and sugars, immediately release hormones into our bloodstream before the food starts digesting. These hormones, primarily leptin and serotonin, signal to other hormones to start preparing the body for the influx of energy and to tell us that something good is happening.

Both of these hormones are released in greater amounts in fatty and sugary foods, as mentioned earlier. Serotonin, also known as the hormone of happiness, makes us feel good about eating these types of food, and encourages us to continue. Leptin, on the other hand, monitors the amount of food eaten, and provides long-term regulation of energy balance by suppressing food intake. But, the more obese a person is, the more resistant they are to the effect of leptin. Over-indulging in calories in short bursts, such as eating highly concentrated sugar in the form of a whole chocolate or half a kilogram of ice cream, develops leptin insensitivity. Unfortunately for us, the global fast food chains profit greatly from exactly these types of food, marketing them ever more aggressively, nurturing a false sense of necessity and disinformation about them.
After some times, the initial sugar rush subsides and the person is left questioning their decision to eat a whole can of ice cream. This is due to the dropping serotonin levels, and should be a warning not to do it again, not an invite for a second round, as some people think.
Although necessary for homeostasis and the urge to stay properly fed, these variations in serotonin levels can also become problematic, if exceeding normal values. A person may develop cravings for certain products, such as chocolate, potato chips or other, which can grow into real addiction if not controlled.
Another side effect of the radical serotonin change is the so called mental hunger. Typical hunger is caused by physical contractions in the stomach muscle wall as it shrivels from being empty. This sends signals to our brain to remind us that we need to eat something. On the other hand, mental hunger can arise regardless of the stomach fullness, where serotonin again plays a major role: alongside other hormones and factors, it oversaturates the receptors in our brain, and creates a state of ever-increasing demands for diminishing returns. Such diminishing feedback loop is commonly seen in all addictions, where increasing amounts of substance is needed to achieve the same result of euphoria or „feeling good“. We feel the need to eat more, even if our stomach is already full.

Diet as a misconception

Whenever people think of diets, they think of a short, tedious, and mostly unsuccessful period of time designated to lose weight. However, diet is a „habitual nourishment“, according to the Merriam-Webster dictionary, meaning the type and quantity of food and drink regularly consumed.
To start a new diet is to start a life-changing event, in a literal sense.

Diets, as usually advertised, are an event advertised as best accompanied by food supplements, special drinks and meals, and usually end after a period of less than several weeks. Miracle diets that typically reduce carbohydrate intake tend to work very well in the first three weeks, but fail spectacularly once the yo-yo effect kicks in. These diets rely on ketosis, body's most inefficient energy production method, to provide the necessary energy, which, it obviously can't. While the role of food supplements won't be discussed here, there are medical scenarios where they are both needed and desirable, but most of the time overweight people without specific medical needs don't need any of them. The yo-yo effect describes the return of weight after the end of such a diet, usually with a few new kilograms added. To understand why, and why such diets are more harmful than beneficial, we need to understand how food is processed, and how our cells benefit from it.

Obesity has become one of the world's leading health problems. Together with its secondary factors such as cardiovascular diseases, type 2 diabetes, certain types of cancer, osteoarthritis, and other, cost of treating obesity exceeds 150 billion US dollars in the United States alone. Proper education and problem approach are the first steps in combating the rising number of people physically and mentally disabled doe to over-abundance of energy-rich food.