Within the same species, we can observe morphological differences between male and female. These differences, called sexual dimorphism, can be so important that the two genders are mistaken for two different species. In 1758, a famous naturalist, Linné, classified male and female mallard duck as two separate species. The first naturalists, years later, who observed these two “species” copulate together were very surprised.

The female, in gray-brown tones, is blended in its environment, while male with a bright green head is clearly visible. The females colour can be explained by natural selection. A process, which over time will select the most adapted individuals to their environment. Thus adorned, she is hard to spot by predators, giving her an advantage over more colorful individuals. Why does the male of this same species have bright colors? This is explained by sexual selection. 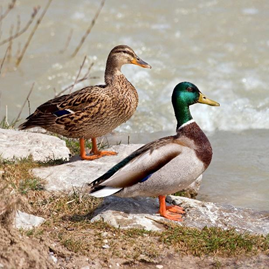 The sexual selection, as Darwin wrote, “depends on the advantage which certain individuals have over other individuals of the same sex and species, in exclusive relation to reproduction”. That means in access to mating partners. Some morphological or behavioural traits are an asset to seduce a mating partner. These traits are called secondary sexual characters and are submitted to the sexual selection. Primary sexual characters are genitals and body parts used in parental care like mammary glands in mammals.

Secondary sexual characters are very diverse: size, colour, behaviour, some attributes such as antlers in deers, antenna length and cerci morphology in some insects.

When there is a choice by sex exercising a selection pressure (female in general), this one can base its choice on benefits that it will obtain from its mate (male in general). These benefits can be direct or indirect.

Nutritive resources provided by a second mate can take the form of nuptial gifts. Male nursery web spiders bring a nuptial gift wrapped in silk containing food resources. Once a female grabs a gift, male can begin to copulate with her. Females can decide to stop copulation at any time. It has been demonstrated that bigger gifts, longer copulation time and greater number of eggs fertilized by male. This tends to show that females are sensitive to nutritive resources provided by male. 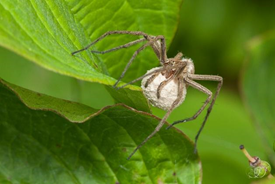 Quality territory can mean food resources are numerous, predation risk is lower and the temperature environment allows an optimal growth of young, especially for aquatic environments.

Second mate can provide protection. An individual who feeds is not very vigilant of surrounding predators. Having a mate with highly developed vigilance allows it to feed itself longer. Female grey partridge performs precisely a choice on this behaviour trait. 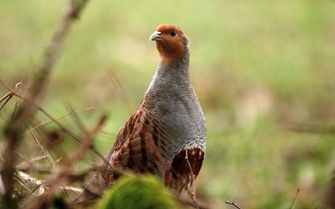 Mate protection can also be provided against congeners. In many species, males to copulate ardently solicit females. Even after forming a stable couple, this sexual harassment can continue, hence the need for a female to mate with a socially dominant male.

Parental care that will be provided by the second partner can be appreciated by the presence of some traits in the latter. Color intensity found in some animals is a secondary sexual characterreflecting their ability to find food in their environment. Therefore, the pigments we see are pigments found in the dishes they eat. This is particularly the case of the flamingo whose colour derives prawn.

In blue tits, this phenomenon is observable with yellow colour on breast. Males and females that express an intense yellow colour will feed their chicks more often than dull ones.

Relationship between the proportion (%) of caterpillars delivered to the young and adult plumage yellow coloration (carotenoid chroma) for male and female blue tits. (GARCÍA-NAVAS et al, 2012)

In this species, both genders can choose a mate in the function of parental care quality that it will bring.

Direct benefits are various and include the immediate advantages provided to mates and offspring.

Indirect benefits are benefits genetically transmitted to offspring. Benefits can simply be a transmission of secondary sexual character making the son, in adulthood, just as attractive as the father, if not more. In other case, in addition to being attractive to the opposite sex, secondary sexual character provides an immune advantage. This is particularly the case with the yellow color seen previously in blue tits. In addition to being a sign of good nutrition for individuals, it is also a sign of a good immune system.

These indirect benefits provided to each descendant are at the origin of the evolution of secondary sexual characters, the essence of sexual selection. Several models can explain this evolution. They will be detailed in a future article.

2. DARWIN C. – 1871, The Descent of Man and Selection in Relation to Sex. John Murray, Lond Research.