Towards a better understanding of dyslexia

Dyslexia affects between 5% and 7% of the population. It is a disorder that is often underestimated and misunderstood by the general public but also, and especially, by the school system. This dysfunction has multiple causes -both genetic and environmental - and is frequently accompanied by other disorders.

What you think you know

You must have known, during your school years, a dyslexic classmate. But why does this disorder grant these students, once detected, to have more time to do their exams (one third of the time), or even to be accompanied by an AVS (auxiliary school life)?

Like all disorders in the "Dys" family, dyslexia is a learning disability. It is more specifically related to reading. However, it is also often associated with written expression. We speak of a difficulty in learning graphemes (written signs) and phonemes (sounds). According to Seidenberg and McClelland (two researchers in psychology), the following three areas are crucial for good reading skills The reflex of parents, and even teachers, is to make the student read more and to multiply the lines and dictations. But for a dyslexic, this is a vicious circle. The student is aware of his mistakes even if he does not understand them or cannot avoid them. This relentlessness will reinforce his lack of self-confidence, which may lead to a deep malaise and a real blockage of reading and writing.

For those reasons, early intervention and real follow-up are crucial to help the students’ development. If not fulfilled, researchers have observed and studied different possible repercussions depending on the school level.

Before entering elementary school, the child may show difficulties in understanding and distinguishing words that rhyme together or words that sound alike. During the first year of elementary school, it is possible to develop an inability to learn letters, to read words and to have spelling difficulties. This results in poor academic performance, rejection of school and blocking when handing in assignments to teachers.

In free writing, the child will practice word avoidance when unsure of a word. This is often misunderstood as a lack of culture or vocabulary. Another preconceived idea was that IQ or intelligence quotient and dyslexia were associated by taking into account the morphological differences of the brain between a dyslexic and a non-dyslexic. And it is proven today that there is absolutely no link.

Reading is "hearing with the eyes”

For a long time, the research world considered it to be a specific learning difficulty that could not be explained physiologically, whereas today it is. What happens in the brain of a dyslexic? Dyslexia is classified as a neurodevelopmental disorder. It has different causes: genetic, as a hereditary disorder, it is transmissible from generation to generation; environmental, but also neural. It lasts throughout life and is triggered early.

To date, four genes have been identified as being linked to dyslexia. They are involved in brain development, neuron migration, and the learning and sound perception area.

Neurological studies, using neuroimaging (images of the brain and neurons), have shown that dyslexics have different brain function.

It has also been observed that the volume of grey and white matter in certain areas of the brain, the left temporo-parietal areas, is less important but also less well "organized".

A beautiful mess for them and for us

To try to make this clearer, but also to visualize the different parameters playing a role in dyslexia, here is a diagram trying to group all the factors together. 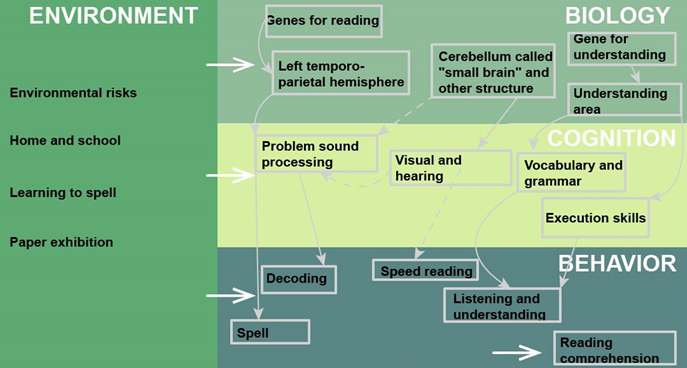 Dyslexia can be difficult to detect because it does not cause "typical" errors. Moreover, it is often added to other disorders that affect 40 to 60% of them, such as depression, hyperactivity or attention deficit. This is known as comorbidity. It also adds to many oral language problems such as understanding and distinguishing sounds (phonology).

The other disorder now detected thanks to the diagnosis of dyslexia is dyscalculia which refers to a perception of numbers and numerical quantities. Indeed, mathematics requires verbal skills such as knowledge of numbers, counting, and understanding of statements. Thus, learning addition and multiplication tables can become a real obstacle course.

Towards a better understanding and support

The number of people detected as dyslexic is increasing more and more at school and in higher education. Is this due to over-diagnosis or to awareness?

The goal of research in the study of this disorder is to better understand it by taking into account the abnormalities and brain differences that it can cause. There is not just one single disease called that. This is due in part to the diversity of writing systems and orthographic depth that can play a role. Moreover, each language and model of its learning have their own specificities, which makes the work of researchers all the more complex to obtain a "typical" model of the brain of a dyslexic person.

This is why, in the first instance, the work and help takes place within the home with a better understanding of this disorder by the child's entourage. This also requires better support and acceptance of the school system which has a major role in the child's development.

9. Knight, C. What is dyslexia? An exploration of the relationship between teachers’ understandings of dyslexia and their training experiences. Dyslexia 24, 207–219 (2018).