When our DNA draws us a portrait

In the last few years, major advances in genetics, and particularly in sequencing, have allowed experts to develop protocols to create what is called a "genetic profile". What does this involve? Can this method be applied under any conditions and what are the current limitations?

In the "classic" cases of DNA identification, by genetic fingerprinting, biological traces (blood, sperm, saliva, bones...) are found and analysed in order to be compared to a database. If no results are found, a "genetic sketch" can be established, and this only on request of a judge. The "genetic sketch" is there to guide the investigators, but it does not yet provide an accurate picture. It can be used to model the most likely face of a criminal who has left a DNA trace or to help identify the body of an unknown person.

How does it work?

As human beings and therefore members of the same species, we share a similar genetic heritage. However, there are variations from person to person. It is these variations that make us unique. Even though we have received half of our genetic heritage from our biological father and mother, we are not copy and paste. It is this "uniqueness" that has been exploited by experts to create "genetic sketches".

To better understand how this is possible, it is necessary to delve deep into our cells. There we find the genotype, the whole genetic information of an individual. The genes that make up our physical, morphological (phenotype) and molecular characteristics are present in variable forms called alleles. Each of our parents bequeaths us an allele of each gene. 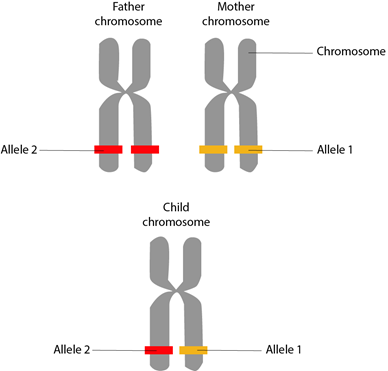 Diagram of allele transmission between biological parents and child

The genetic variations that differentiate us from our biological relatives and that occur within our DNA are called polymorphisms. It is this individual identity card that interests our experts.

Within the framework of an investigation where an identification is necessary, the DNA is often degraded and/or in very small quantities. It is therefore imperative for investigators to use areas of DNA that highly variable for each individual. In the context of "genetic profiling", this involves SNPs (single nucleotide polymorphism) where the variation of a nucleotide at a given position in the DNA is observed. The nucleotides A, T, C, G being "the bricks" forming the DNA. 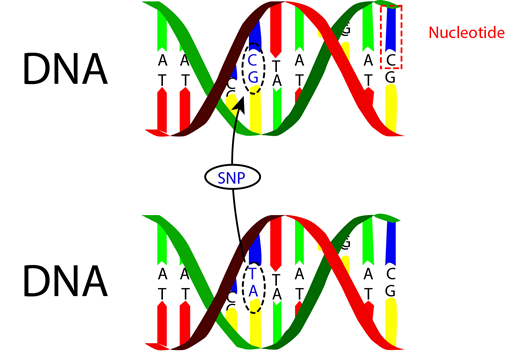 Diagram of an example of SNP. We find a variation of nucleotide

However, there is a difficulty. Either the SNPs can be in the genes, in which case the whole machinery is impacted and the protein obtained with the help of the code held in the DNA is changed (see the article "The protein this unknown star"). Either the SNPs are outside the gene concerned, so they are said to be in the regulatory zones and they can somehow turn on/off the gene concerned.

The main task of the researchers is to determine which SNP does what. Which SNP affects the size of the nose, the colour of the eyes and hair, etc.? Moreover, a gene can influence traits (eye and hair colour), but a trait can also be influenced by several genes at the same time.

Once the SNPs have been determined and associated with physical traits (nose size, for example), researchers sequence these SNPs in order to identify and calculate the probability of having one physical trait rather over another (blue eyes versus brown eyes). Sequencing is a technique that makes it possible to know the order in which the nucleotides (building blocks of DNA) are found on the observed part of the gene. The IRCGN uses a massive sequencing technique and not Sanger (the most common). The advantage? It can study several hundred SNPs in one reaction, unlike Sanger which can only do one at a time. This not only saves time but also allows the impact of several genes on a trait to be taken into account and vice versa.

What traits can be modeled on a "genetic composite"?

Technological advances in the study of DNA and its sequencing have allowed this method of investigation to determine the percentage chance of obtaining different traits, such as eye colour, hair colour and skin colour. 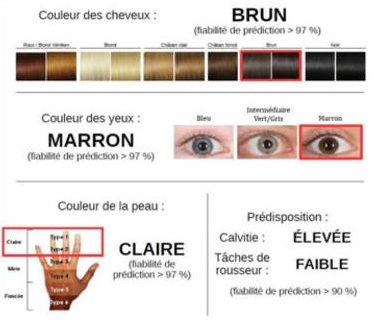 Slide on the "genetic composite" based on eye, hair and skin colour (Source: IRCGN document)

Extreme characteristics remain the "simplest" to determine, such as blue and brown eyes, while intermediate colours such as green are more difficult to demonstrate. Regarding hair colour, it is the childhood colour that is determined, as during growth and adolescence it is possible for hair to darken. A person defined as blonde by statistics could in fact be brown in adulthood. Indeed, age is a difficult parameter to take into account. However, recent studies on epigenetics tend to provide a biological age range (not birth age). Epigenetics is the influence of environmental elements on the ON/OFF switching of genes.

A biogeographical origin can also be determined. It is a question of knowing what type of continent the individual would come: Europe, Africa, Asia... Just like when you ask a passer-by to describe a person in a photo.

What about the shape of the face?

Determining the shape of the face for these "genetic robot portraits" is proving to be very complex. With this in minde, the VISAGE consortium of 8 countries was created in 2017 with the aim of studying and improving these investigative techniques. In the case of face shape, many genes have little effect. It is therefore necessary to study a very large number of genes to try to capture all the effects related to the shape of the face. Added to this are the interactions between genes and the impacts of the environment, which cannot be taken into account at present.

A method reserved for crime?

Besides the forensic aspect, this portrait technique is also used in historical contexts. The IRCGN has already had the opportunity to participate in the facial reconstruction of a Poilu, who died for France 100 years ago. Other cases of application in the service of archaeology have already been carried out, notably for the portrait of King Richard III in 2014. 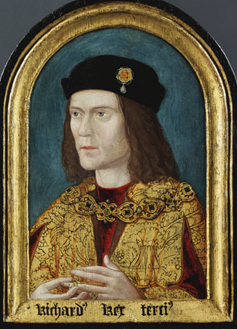 There is no legislation strictly speaking framing "DNA sketches" in France, only a ruling by the Court of Cassation (ruling no. 3280 of June 25, 2014 (13-87.493) of the Criminal Chamber of the Court of Cassation. Currently, only judges decide which physical character is studied. If a text framed this practice in the immediate future it would quickly be overtaken by technical developments in the field. It is therefore under this vague notion of apparent morphological characteristics that it is decided whether eye colour, the predisposition to baldness, the corpulence, etc... must be studied.

The "genetic sketch", like a photo of ourselves, is still some time away, but this technology, which is constantly evolving, is already helping investigators in their work.