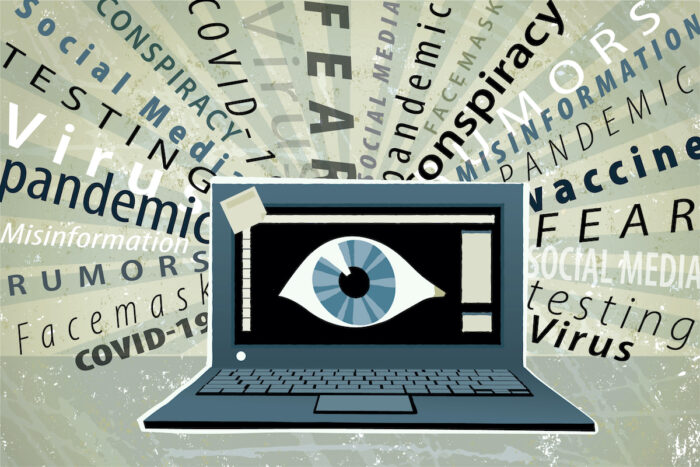 In recent years, "conspiracy theories" have been gaining a lot of attention on the Internet and in the media. But what exactly is a conspiracy theory? 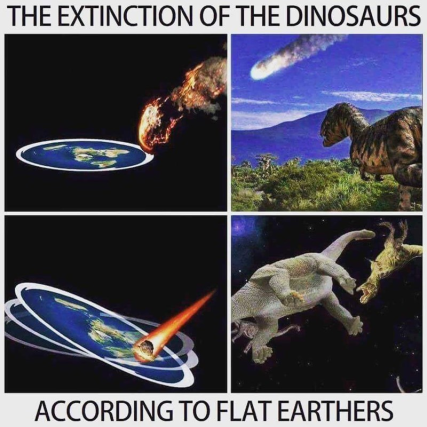 A conspiracy theory is an explanation of a historical event (or events) that is caused by a small group of individuals acting in secret. Tragic events such as the assassination of Martin Luther King, the 9/11 attacks, or significant events such as the conquest of the Moon, Covid-19, frequently provoke the appearance of conspiracy theories which are similar to naïve explanations competing with the official versions, often involving the intervention of a group acting in the shadows.

How to recognize conspiracy theories

Thus, conspiracy theory has three characteristics. It is based on causal reasoning; it involves a process of social categorisation, i.e. the placement of individuals in a group; and finally it assumes intentionality on the part of the members of that group.

There are also five criteria: the conspirators' hidden agendas are nefarious; the conspirators demonstrate a clear desire to hide the truth; conspiracy theories contradict an "official" or "obvious" version; they link events that are not obviously related to each other; and finally, outliers (contradictory elements or elements that have not been explained in the "official" version) are the basic elements of conspiracy theories.

It is estimated that more than a third of Americans believe that global warming is a hoax, and more than half believe that Lee Harvey Oswald did not act alone in the assassination of John F. Kennedy. These are examples of conspiracy theories: explanations of important events that involve secret actions or theories of powerful and malevolent groups.

Many are mentioned in the media, politics, literature and other spheres of culture, for example the popular success of films or TV series such as The Matrix, X-Files, and more recently the french documentary Hold Up. At the same time, some conspiracy theories are very old, such as the "Jewish conspiracy", or the conspiracies repeatedly attributed to the Freemasons or the Knights Templar, which are seen as threats to the existing social order. 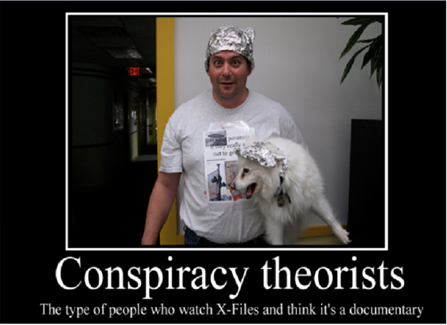 The social divide: one of the causes of the emergence of conspiracy theories

Contemporary conspiracy theory owes much to the refusal to believe the elites, whether political, media or intellectual, given the growing social divide. It involves the search for other sources of information, with the help of the Internet, social networks and certain blogs. It also resorts to conspiracy sites wherethe true and the false are constantly mixed, where proven information is taken over from the serious media with false elements, all mixed on a background of false culture, ending up by sowing confusion and sometimes conveying fascist ideologies. The conspiracy theory, put forward by ideologists who shape the lie, then takes on the appearance of truth, it becomes plausible. 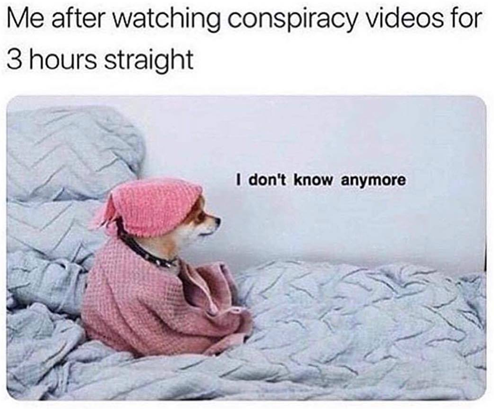 Why conspiracy theories appeal to some

People may be attracted to conspiracy theories when, compared to non-conspiracy explanations, they promise to satisfy important social psychological motives that are characterised as epistemic (e.g. the desire for understanding, accuracy and subjective certainty), existential (e.g. the desire for control and security) and social (e.g. the desire to maintain a positive self- or group image). Cognitive biases are also the reason for adhering to a conspiracy theory. They are considered as heuristic processes, i.e. mental shortcuts to quickly and efficiently evaluate complex information (see our article on heuristics). These biases are part of system 1 thinking, the automatic system, which requires minimal mental effort. They are: conjunction error, hindsight bias, intentionality bias and self-perception of conspiracy theory influence. 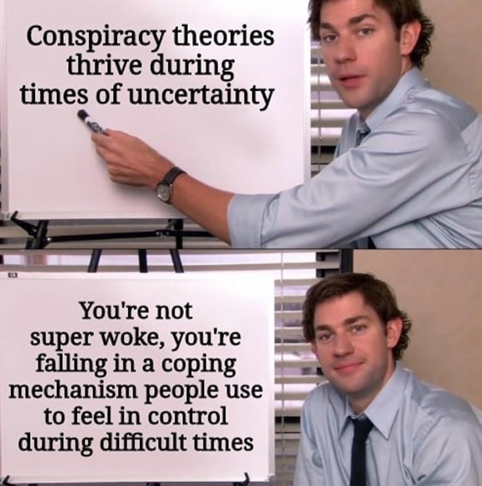 Our beliefs are already biased

At the root of any conspiracy theory is a set of real or supposedly coherent facts in a story. However, when a theory is available to explain certain distinct events, there is often a temptation to link these events together. This is known as the conjunction error: it is the cognitive bias that consists of estimating the probability of two joint events as greater than that of one of these two events considered in isolation. Thanks to the conjunction error, events that could be purely coincidental or contingent end up being linked.

This bias also contributes to the production of another bias: the hindsight bias, also known as "I knew it all along! ». This is a tendency to rationalise an unforeseen event after the fact: it is seen as more likely or predictable than it was before it happened. With these cognitive biases, conspiracy theory tends to give a deterministic character to the past.

Then there is the intentionality bias, which is a thinking mechanism that causes an error in judgment. This error would lead the person to overestimate the role of intentional causes of a person or a group. Infact, human beings automatically tend to give an intention to a behaviour, because looking for other causes for this behaviour would require more cognitive resources (this is, again, system 1 thinking). This error of judgement would be all the more likely when the events we are trying to explain have negative consequences, such as the lack of distribution of masks at the beginning of the health crisis, for example.

Who are conspiracy theories aimed at?

It can be seen that certain differences appear depending on the group to which the conspiracy is attributed. For example, for the psychologist Moscovici, conspiracy theories involve minorities. According to him, the minority constitutes, by its very existence, a threat, a plot against the established order and the majority way of life. An example is the 'communist threat' perceived in the United States during the Cold War.

Sociologist Campion-Vincent's thesis implies that there are at least two categories of conspiracy theories today: a System category and a Minority category. Since the French Revolution and the end of the monarchy, a new form of conspiracy theories has emerged in the popular mindset. This new form implicates not minorities, but evil and powerful elites (aristocrats, the government, the secret services, the pharmaceutical industry, etc.). Often these elites remain ill-defined, and it is the system that is blamed. The assassination of US President J. F. Kennedy in 1963 is the paradigmatic example of this category of conspiracy theories. The alleged conspiracy (involving the CIA or the KGB, depending on the version of the story in question) is more plausible to a majority of people than the official version of the assassination involving a lone killer. According to Campion-Vincent, the Minority category allowed the frustration and hostility experienced by the oppressed people to be diverted onto scapegoats. The category System would appear with the emergence of the modern state, which was less repressive of critical and deviant ideas than the monarchy and the Church had been in the past. However, this second category does not succeed the first, but coexists with it.

How to deal with a conspiracy theorist? Is it possible not to be one?

There is a paradox in the content of conspiracy theories: there are often fanciful elements, but at the same time there is a kind of logical hyper-coherence in the details invoked to support the narrative, because both our systems of thought are used (see the article on heuristics). Conspiracy theories are therefore often irrefutable, as any argument against the conspiracy is transformed into proof of its existence. Practical, isn't it?

But don't worry, there are solutions to conspiracy theories!

The first is to put lies and conspiracy theories in their place: sometimes they are very worrying, and do not deserve the hype they generate in the media. You have to get over it.

The second part of the postulate is that we need to develop critical thinking, the ability to judge, reason against dogmatism and sectarianism: this is an essential function of education. This goes hand in hand with having a good research methodology: knowing how to select information, and taking a step back when faced with unverified or unsourced claims. 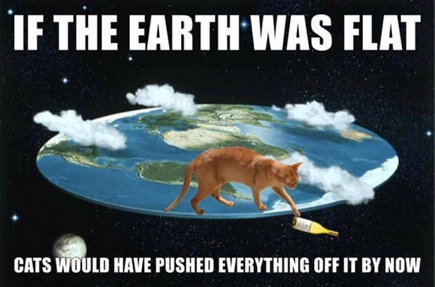 Finally, pragmatic answers are needed, based on evidence, not on ideologies, however benevolent and humanistic. This knowledge can only be multidisciplinary, ranging from psychology and cognitive science to political science, history and sociology, in order to be able to address these issues that are at the heart of the transformation of the contemporary world. We cannot understand conspiracy if we do not consider the economic and social transformations that affect our societies, if we do not enter into the analysis of the media and digital technology that are shaping the communication era. More research to do, great!