Imagine you had to remove the lettuce, tomatoes and onions from your burger, leaving only the meat, sauce and cheese. The rest of the ingredients just make you want to vomit. This is what people with Sensory Processing Disorder (SPD) experience every day.

This syndrome affects 25% of children with “normal” development and between 50 and 80% of children and adults with multiple disabilities. Not every person is affected the same; symptoms can range from simple dislike towards some food to total disgust. Different people reject different food categories: it can be fruits and vegetables, starchy foods or meat. This syndrome has long remained in shadows and was considered a childish whim. The symptoms, one more pleasant than the other, can include nausea, gagging, regurgitation, vomiting, lack of appetite or discomfort with smells, brushing teeth, and other. 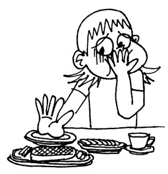 Dislike for some foods
(phobie-alimentaire.fr)

The origin of Sensory Processing Disorder
SPD is caused by hypersensitivity of the gums, palate and tongue. They all contain a multitude of nerves that transmit information to the brain when they come in contact with food. Hypersensitivity happens at the level of mechanical and chemical receptors.

Let's imagine that the mouth is the UN building and the different communication departments are the receivers. There are dozens of people from different countries working there and the languages spoken can be compared to food. Communication between these countries is done by e-mail or by post in dedicated departments. A department will receive information in a language, translate it and then send it to the Council (the brain).


The tongue (the organ) is made up of receptors called taste buds (or papillae), which are chemical receptors, and correspond to the e-mail in this analogy. We cannot hold them in our hands, but we can read, understand and respond to their information, as well as the information given by them: sensitivity (pain, temperature) and tastes (sweet or salty, for example). The tongue is also made up of filiform papillae, which are mechanical receptors, and these are the physical mail which we can hold in our hands and touch. These papillae make the tongue an organ of touch, capable of recognising the shapes it comes into contact with.

Schematic depiction of a taste bud.

It is also known that we also 'eat' through our nose, metaphorically speaking. The inside of a nose is made up of many chemical receptors (mails) that allow the brain to associate a smell with different food.

In a normal case, food coming into contact with the inside of the mouth will cause a stimulation of the receptors. It is like a UN country sending emails and letters to the departments to send the translated information back to the Council (the brain). The Council takes note of the information and sends instructions. The brain will secrete two hormones at a higher or lower rate: dopamine and serotonin, the "pleasure" hormones. They will determine the attraction of certain foods over others.


If the brain's response to the stimulus is too fast, too intense or too long, it is called hypersensitivity. It is as if the Board is sending out a lot of instructions at the same time and the employees don't have time to process everything. The brain has secreted too many hormones, the information is badly processed and overwhelming, and will trigger a gag reflex.

SPD is hereditary, which means that a one or more siblings can be affected, and one parent will have passed it on, but everyone is affected differently. For example, a mother may have a dislike for some food, a daughter an aversion to fruit and vegetables and a son an aversion to almost all foods.

Psychological and sociological consequences
When a child does not eat normally, everyone around him is affected. Everyone feels ashamed, guilty and looked down upon by others. Parents feel they have failed in their role, their child is not "normal", they are helpless in the face of the situation and feel powerless. Often when they talk about it around them, whether it is their family or their doctor, it is always the same phrases that come up. "It will come later! "Your child is difficult! "or "it's a whim". The child’s eating disorder becomes a taboo subject. 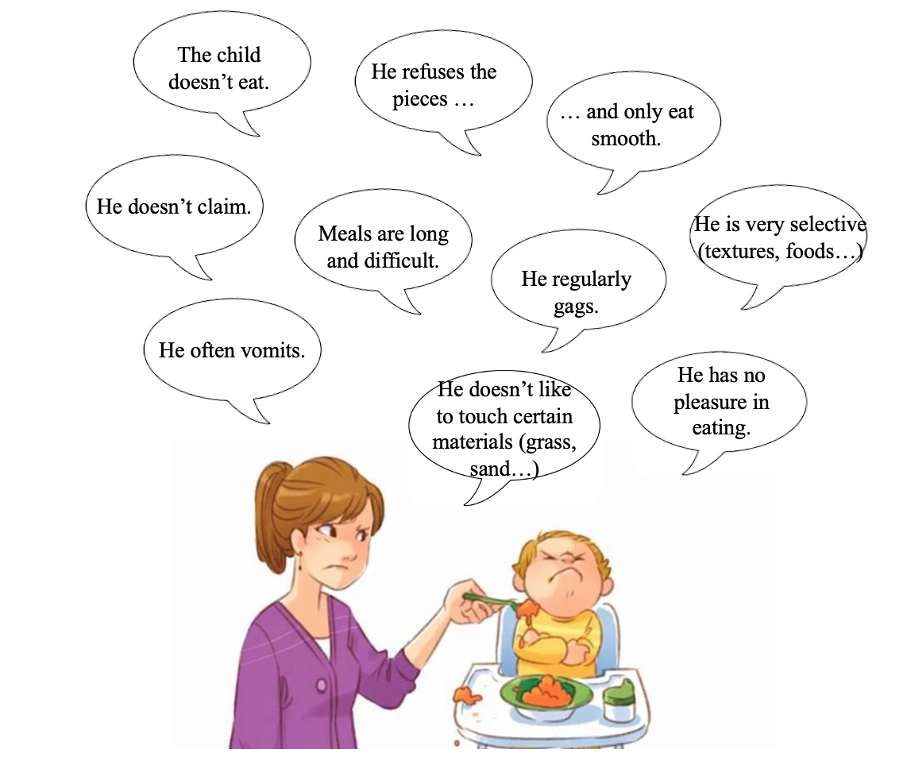 The different symptoms of SPD

It is not easy for the child, either. They feel that they have failed to satisfy their parents and are ashamed of themselves. At the canteen, it's an obstacle course to get something to eat other than bread.

There is also the guilt of throwing away food that will not be eaten. In addition, there is the psychological pressure of the canteen managers, who may force the child to eat their tray, even if it means vomiting in front of everyone. The child will also be subjected to the gaze of others when invited to snacks or to eat at friends' houses. Explaining that you can’t eat everything, they might think you are being capricious: the child closes up, becomes reserved, and creates strategies to go unnoticed.

On top of the sociological and psychological trauma, SPD can be compounded by nutritional deficiencies. If not addressed early on, a child who does not eat any fruit or vegetables will lack vitamins, minerals, and other essentials. This is an additional point for parents to watch out for.

Treatment is possible
Since 2018, this syndrome has been addressed by speech therapists and a treatment has been found. It involves daily oral massages 7 times a day for 8 months of the palate, gums and the tongue. 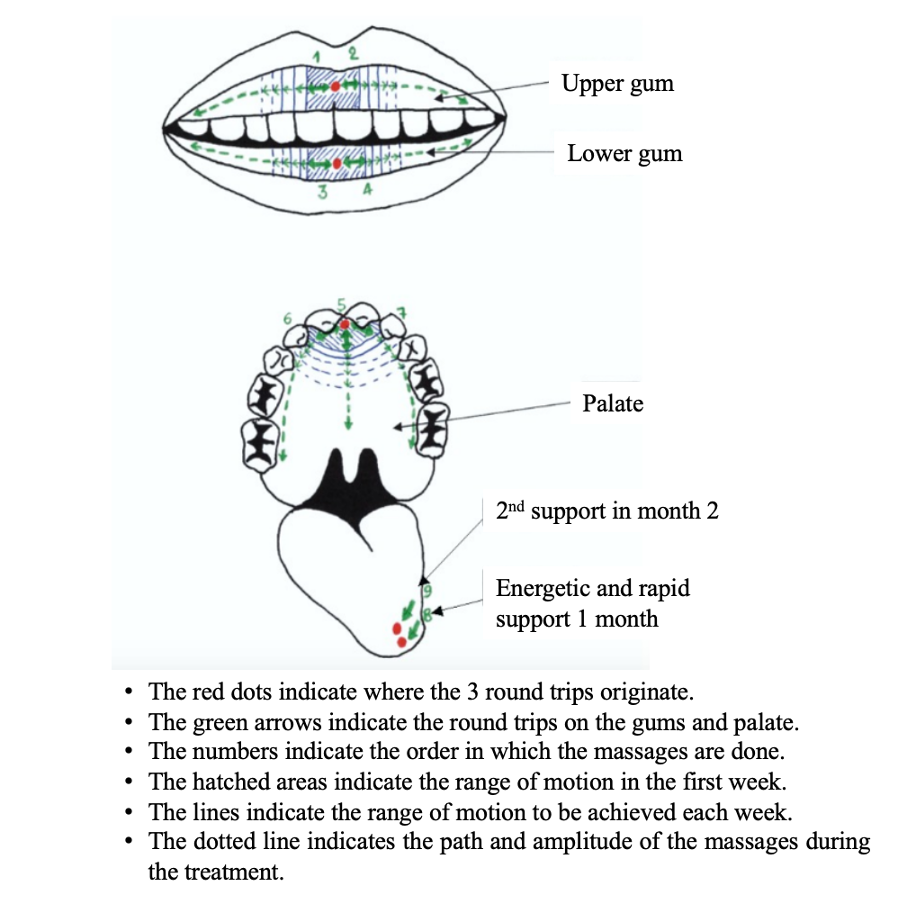 The aim is to stimulate the hypersensitive areas to attenuate the brain's response (the Council), without triggering the nausea reflex.


It is necessary to gradually extend both the duration and the stimulated area. It also involves exercises to get the patient used to the touch, smell and taste of non-tolerated foods. Here too the aim is to gradually expose the mouth cavity to the stimuli. It is important to get the patient out of their comfort zone without rushing them. It should be remembered that in most cases we are dealing with young children or disabled people.

In some situations, the trauma of these eating disorders is so deep that a psychologist’s help is necessary. This is a long and tiring programme for both the patient and those around him. But for people suffering from this syndrome, being able to tolerate even certain foods is a real relief.

The SPD as an adult
When SPD is not treated in early childhood, it may persist into adulthood, but there is no clear data on this. Often it is the doctor’s negligence that precedes years of shame, guilt and tricks to hide the unusual eating habits. And when such adults finally have access to medical care, the psychological road of recovery is longer, as they have to overcome aversions, reflexes and tricks that have been ingrained for decades.

Remember: a child who has difficulty eating is not necessarily a fussy child.