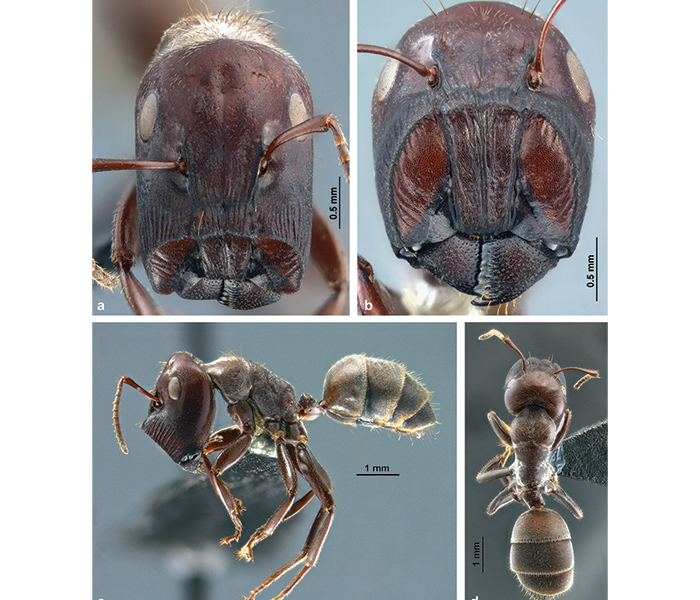 Exploration expeditions continue to take place today, and these result in the discovery of many insects each year. Here, we will focus on a species, Colobopsis explodens, or the explosive ant. It was described by researcher Alice Laciny and her collaborators in 2018. This species, observable in Borneo, in Thailand and in Malaysia, has the particularity of exploding when itself or the nest is attacked.

Each colony contains about a hundred of ants. A colony is divided into castes: queens, princes and princesses, workers, and soldiers. For our explosive ants, most of the colonies observed are in the canopy, the upper area of ​​the forest, 60m (around 196 feet) from the ground. A colony is fragmented between the trees or the surrounding litter (leaves and debris of decaying plants). According to the research team of Doctor Laciny, the minor workers seem to constitute the most important caste of C. explodens of a size ranging between 4 mm and 7 mm, while the major workers are finally few and have a size ranging from 7 mm to 8 mm. The researchers observed that these ants were mainly active at night when the highest temperature was between 24 and 28.8 ° C. It was observed that only the caste of the minors was present outside the nest. These spend a long moment patrolling, ridding the leaves of their debris and other small insects. However, the mode of nutrition of this species has still not been determined.

These minors are very prone to sacrifice when a threat arises. The contents of the mandibular gland are released during self-destruction by contracting the gastric part until the ant breaks and dies. The secretion is viscous, yellow, and has a characteristic spicy odor.

Another amazing fact was observed on this species, a symbiosis with a bacterium (of the genus Blochmania) already described in another genus of ants. This will be the subject of future scientific publications.

When a new species is described, it needs several fields: systematics, a scientific discipline allowing the inventory of living organisms, existing or having existed; the nomenclature, which allows it to be given a name consistent with its filiation, and not used; molecular phylogeny, which studies the DNA sequences of living beings by comparing them to a database; morphometry, the study of physical characteristics; and especially their ecology.

This is the work carried out here by Alice Laciny and her team on the case of the explosive ant. To find out more about their discoveries, we asked him a few questions.

How did you discover C. explodens?

The presence of several undescribed species of “explosive ants” in the Borneo rainforest has been known for about 10 years thanks to Professor Dinah Davidson. This ant was observed for the first time in the literature under its nickname «yellow goo» in 2007.

Where did you find them first?

The first results were found on tree trunks. So far, they have been found in the canopy, but also on smaller trees and in artificial nests.

How did you collect them?

Mainly with a mouth vacuum cleaner. We have also tried to catch them by hand or with pliers, but this leads to an explosion behavior.

When did the species get its name?

The species received its officially scientific name and description of its castes in our 2018 publication.

This exploration mission and the description of this species were carried out thanks to a strong multidisciplinary of researchers, but also thanks to international partnerships. It is a common practice these days in the world of research. This favors a broader approach to studies. The latter has benefited from strong worldwide media coverage thanks to the term «explosives», astonishing and intriguing for the public. In order to reach as many people as possible, researchers are currently naming certain species with scientific names with known sounds, such as the fern inspired by one of Lady Gaga’s dresses (Aleiodes gaga).

Or highlight their surprising characteristics like the yeti crab (Kiwa hirsuta).

These techniques therefore make it possible, by a roundabout way, to draw the attention of the public to current discoveries and to indirectly involve them in the exploration of our biodiversity.