Health that goes up in smoke

As the leading cause of death worldwide, tobacco has a really harmful effect on our bodies and our brains. To ease the process of withdrawal, researchers are working on a gentle way to quit smoking without nicotine, the source of our addiction.

Tobacco comes from the leaves of the Nicotiana genus, the night tree family, usually found in North and South America. Archaeological studies have shown that Native Americans used it over 5,000 years ago for spiritual and medicinal practices.

Today, tobacco is used in different forms around the world. Here we will focus on the most well-known and widespread: the cigarette. Every day 18 billion cigarettes are sold for 1.3 billion smokers. According to the WHO, 8 million deaths are attributed to tobacco each year.

Cigarettes and their explosive composition

It is well known that cigarettes contain highly toxic compounds, which still does not deter people from smoking. Ammonia, a powerful toxic gas; acetone, a solvent and stripper; butane, a flammable product found in lighter fluid; hydrogen cyanide, a deadly ingredient in rat poison; carbon monoxide, a gas that can cause suffocation; carbon monoxide, a toxic gas found in car exhaust; methanol, a rocket fuel; formaldehyde, a cadaver preservative; cadmium, used in batteries; and polonium 210, a radioactive element. All of those, and many more are found in every single cigarette.

Due to more than 7,000 chemical compounds, cigarettes facilitate and cause a number of diseases. Among the most common are coronary heart disease and stroke, lung and respiratory cancers, miscarriages and underdevelopment of fetuses, decreased fertility and increased risk of Alzheimer's disease.

One of the main compounds in cigarettes, and one that is even found in smoking cessation products, is nicotine.

Nicotine, a drug that takes over

Addiction occurs when a substance is consumed in an uncontrolled way and in excess. This is the case of nicotine for a smoker. According to researchers, we are not all equal in front of this addiction. Genetic predispositions, as well as individual circumstances come into play, which is why quitting smoking can be more difficult for some than for others.

How does nicotine affect our bodies?

When the smoke enters our lungs, nicotine will quickly pass into our bloodstream and spread throughout our body, permeate our organs and especially our brain. Nicotine will establish a link with a switch called nicotinic cholinergic receptors. This switch, once activated, will allow the sending of many chemical messengers (neurotransmitters), including dopamine. 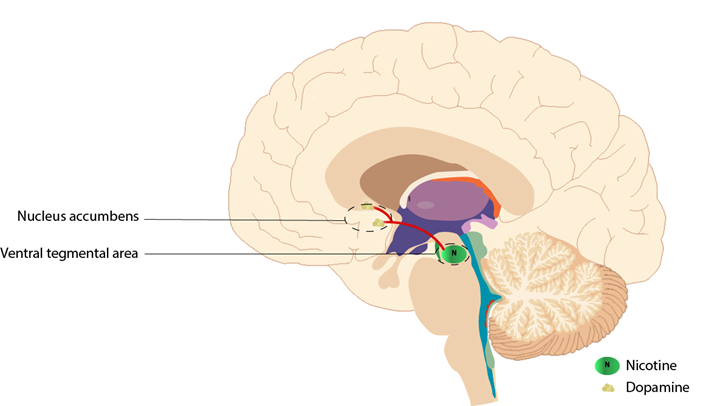 Diagram of nicotine/dopamine interaction in the brain

Dopamine is usually associated with the feeling of pleasant experiences and pleasure. But in reality, the message is much more complex than that. Dopamine can deliver both a positive and a negative effect.

Epidemiological studies (studies of health problems on a population scale) link mood disorders to smoking. Exposure to nicotine increases stress and vice versa, making it an ever-growing closed loop. Together, they constitute a "morbid" couple. Nicotine triples the vulnerability to depression, and depression perpetuates smoking. The risk of developing this disease is present at the beginning, during smoking, and during smoking cessation.

During regular tobacco consumption, and therefore nicotine consumption, the brain is being remodeled. This upheaval happens very fast: three days of nicotine consumption are enough. However, the reverse path is much more difficult, especially because of the associative memory (To learn more about it, let’s go to the article: Heuristics, these daily shortcuts of thought), (coffee break, cigarette at work). Consequently, a teenager who starts smoking and whose brain is not yet mature would undergo a remodeling of his neuronal connections and thus increase his risk of developing depression.

But tobacco does not stop at the brain, it damages the DNA by attaching itself to it via a charge sharing (like a magnet with a minus pole attracted by a magnet with a plus pole). This bond is called a covalent bond and the result are damaged pieces of DNA called adducts. If the DNA is not repaired correctly during the next cell divisions allowing the renewal of the cells, mutations will ensue, which, if found on important parts of DNA, can lead the creation of tumors. 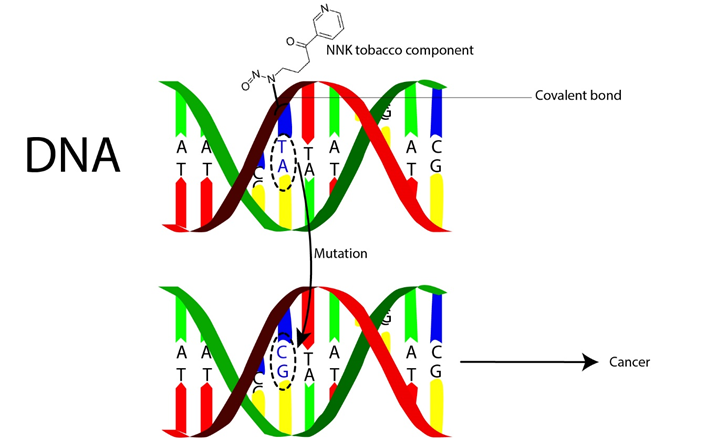 The alternative of the electronic cigarette, a false solution

We now know and understand that cigarettes are harmful. But what about vapotage? With technological advancements, the development of the electronic cigarette has managed to make a place for itself amongst its predecessors. It tempts the users by inventing and mimicking even candy flavors to seduce even younger population. Is it less toxic than its original counterpart?

Few studies and research have been done on this subject. However, we know that all particles always irritate the lungs, and that the electronic cigarette contains pure nicotine. This high level of nicotine reinforces the changes in our reward system in the brain and strongly increases the effects of stress, susceptibility, and the development of mood disorders.

At the beginning of the COVID-19 pandemic, several media outlets reported that cigarettes, and nicotine in particularly, would protect against the virus. At this stage of the epidemic, it was not possible to have any knowledge about this type of observation. No scientific study could verify this link. However, since COVID affects the respiratory tract and infiltrates via the mucous membranes lining the nose, mouth, and bronchi, and since tobacco also attacks the respiratory tract, the combination of the two should increase the risk of infection.

Quitting smoking would allow you to stop having all these worries, but is it so simple? When a person wants to stop smoking, they have to face many obstacles, including emotional and physical problems such as weight gain, irritability, increased anxiety, and others. Currently, the treatment methods used to stop smoking are based on nicotine. The goal of current research is to develop other molecules that would make it possible to do without this drug to propose milder and less invasive elements for our body. But the major difficulty for researchers is the complexity of our brain. Several types of neurons with different roles and functions often react to the same molecules administered, which is not desirable. The challenge is to find a way to design drugs that can target only the areas targeted by nicotine, for an effective withdrawal without damage. Could it be a reality soon?

10. Bonnie, R. J. et al. The Effects of Tobacco Use on Health. Public Health Implications of Raising the Minimum Age of Legal Access to Tobacco Products (National Academies Press (US), 2015).