Glyphosate is the most widely used herbicide in the world today. Its properties were discovered by Monsento in 1970, which marketed it for the first time in 1974 under the name Roundup. In 2014, 820,000 tons of glyphosate were used, including 10,070 tons on French territory. Even today, and despite the growing number of organizations and associations, studies on its impact on health and the environment remain highly incomplete.

The complexity of toxicity

Before knowing if glyphosate and other pesticides are toxic and have a negative impact on our health and our environment, it is important to know what scientists mean by toxic. An element is toxic above a certain dose if biological changes which the element encourages have negative consequences on our health. This dose varies both according to the element (chocolate or cyanide), but also according to the quantity absorbed. For example, it takes more chocolate than cyanide to mandate a problem. Nevertheless both are harmful, only in different concentrations.

Glyphosate and its friends

Both glyphosate and its derivatives are often based on oxidized petroleum and are never used alone in agriculture. It is put in the presence of elements that allow it to be diluted, like when you dilute a sugar in a glass of water. Glyphosate is also put in the presence of activators to be fully operational. This one acts on a very particular molecule in plants, bacteria and certain fungi. Once activated, the glyphosate can then penetrate the plant to better "destroy" the pests.

Diagram of the composition of a herbicide

Elements that are added to glyphosate for the activation and dilution of the pesticide are called formulants. Once sprayed on the plant, they will enter the cells and cause their death by preventing cell respiration, which is a mechanism for producing energy. Their role is well documented, unlike glyphosate, whose mechanism of action is poorly understood.

Still today, one of the major problems of the available studies, in addition to their limited number, the multiple inconsistencies and imprecisions, is that the toxicity of herbicides has been mainly evaluated by taking into account only glyphosate alone, and not with the elements with which it is mixed.

The problems caused by herbicides

Being used in great majority in the field of the agriculture, the applications are carried out in a massive way. It is therefore necessary for the crops receiving them to resist them. Therefore, glyphosate and its formulants are mostly applied on genetically modified crops (GMO).

Another problem raised by ecological organizations and studies shows that these important dispersions of herbicides favor the resistance of certain plants "harmful" to the crops. Let's imagine that in your field or garden, a type of plant displeases you. You will try to eliminate it with a herbicide. Following your spraying, only one small shoot will remain. You probably won't notice it at first, but it is the resistant shoot. When this growth reproduces, your herbicide will no longer be sufficient and you will have to increase its concentration (to make it more effective). This mechanism can be repeated over and over again. Spraying herbicides therefore induces the emergence of highly resistant plants, which can cause strong ecological and environmental impacts. 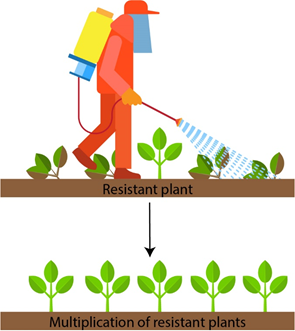 Diagram of the process of plant resistance to herbicides

In 2017, pesticides were found in 80% of the groundwater body with one quarter exceeding the regulatory threshold of 0.5µg/L. Various elements are currently contaminated in addition to gardens and agricultural plots. There are residues in house dust, on roads, railroads, in airports and in food.

This year, INSERM, a French research organization, published a major collective expertise on the subject of pesticides and their effects on health. In order to produce this report, 5,300 documents were collected and studied. In this report, the link between glyphosate, anxiety-depressive disorders, Parkinson's disease, etiological chronic kidney disease, pregnancy duration, newborn size, birth defects and neurobehavioral disorders were studied. However, as reported in many studies, the nature of the data, imprecisions, small populations of people studied (sometimes less than a hundred) or inconsistencies in the conclusions do not allow a definite link to be established. In this report, leads and recommendations are made in order to obtain better conclusions. Some diseases are, however, classified as potentially linked to pesticides or strongly suspected, such as non-Hodgkin's lymphoma, which is linked to a genetic alteration. 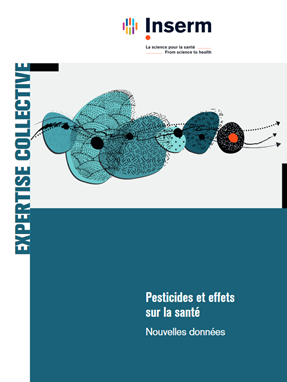 Cover of the INSERM report on "Pesticides and health effects

How does glyphosate work?

This molecule is used to block the production of amino acids in plants, the constituents of our proteins and that of the plants. According to their assembly and the shape that this string of pearls will have, we will have a protein with a very specific function. As said before, glyphosate acts in plants, bacteria and some fungi because only they have the gene on which glyphosate can act. 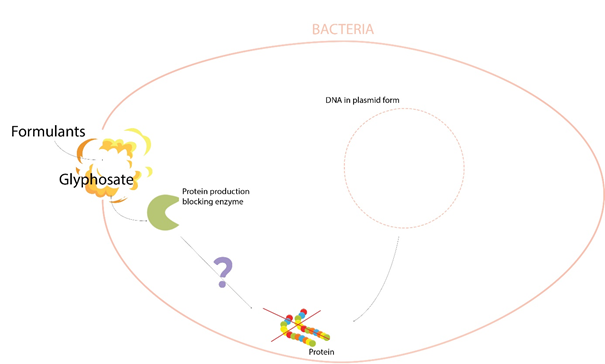 Schematic of glyphosate action in a bacterium

A study that needs to be confirmed concerns the disruption of the concentration of molecules that allow our neurons to communicate and transmit information (neurotransmitters). This could therefore have an impact on behavioral disorders.

An alteration of our microbiota, where we find the intestinal bacteria, has been demonstrated. Glyphosate has an impact on certain bacteria, and those in our bodies that work with us may suffer.

A growing mobilization and awareness

In recent years, the desire to better understand the effects of pesticides on the environment and on humans has become more and more important.

The mobilization around occupational health with agricultural workers, locals in the growing areas, environmental activists and associated legal professions is growing. The social, economic and political rise of rural areas as well as agricultural areas allows a voice outside of scientific publications.

In the long run, it would be of great importance to give more space to this subject in the media, but also to complete numerous studies such as the socio-economic aspects of pesticides, which have so far been very meagerly addressed.

Epidemiological studies which concern the study of populations and the establishment of statistics have served so far as important alarm signals on the situation but are still not taken into account enough. To be followed... closely.