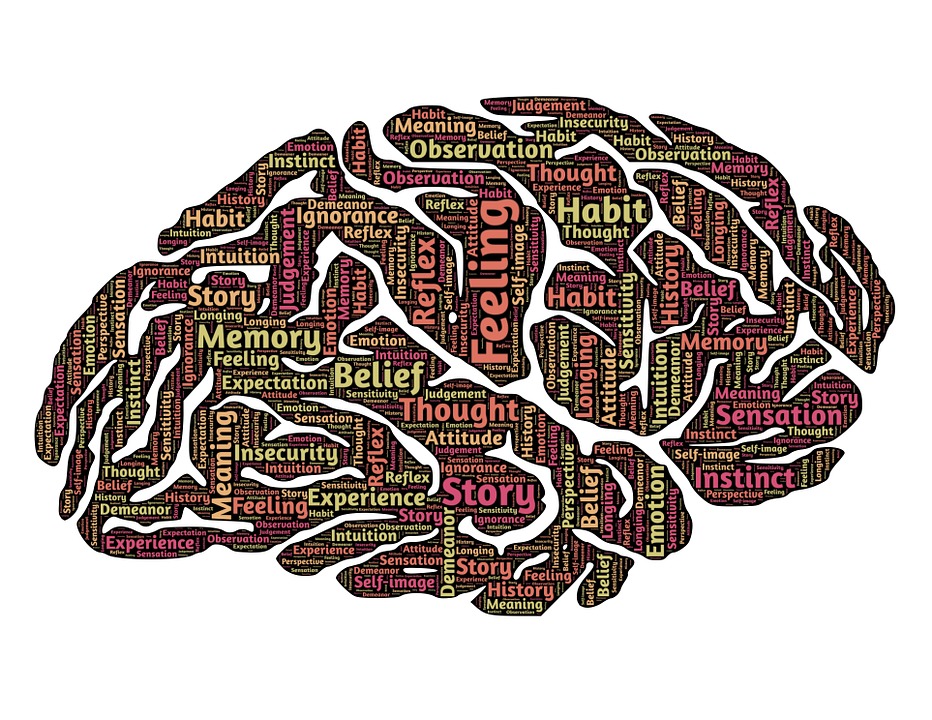 The formation of the brain and the development of thought has always fascinated scientists. A better understanding of this "block of jelly" opens the way to many technological and medical possibilities. The brain is yet to reveal all its secrets.

This is the second part of a series of articles about the origin of thoughts. The first part can be found here . This article leans heavily on previous knowledge gathered in preceding articles about neurons , astrocytes , oligodendrocytes and microglia . It is highly recommended to explore them first, for a better reading pleasure.

Everything starts from the brain

After a month of multiplication of cells, the neural tube becomes the spinal cord and the brain of the embryo. The mass of cells inside the proto-brain and proto-spinal cord corresponds to a 70's computer: nothing is wired correctly, error messages are flying all over, inputs are still mostly illegible and power consumption is enormous.

This is the start of a two-way communication between the mother and the embryo,and for some the moment the embryo starts becoming a living being. From this point forward, the proto-brain has the ability to probe and communicate with the outside world, with its creator and caretaker: The Mother. The communication is still sparse, but as time progresses it gets more accurate, more intense and more encompassing.

Neurons start connecting to each other, but also to their final destinations, the organs. The range and scope of their actions are still miniscule due to lack of oligodendrocytes and proper insulation, and sparse population of astrocytes with their ability to monitor synapse functions.

At this stage, the embryo adds new and exciting features such as heart, liver and other soon to be crucial organs. It can respond, monitor and adjust several functions such as heart rate, oxygen levels, blood glucose and more.

If the blood glucose is low, the brain can now actually warn The Mother by producing neurotransmitters and hormones, creating that craving for pickle juice and strawberry pudding mix which pregnant women sometimes experience.

After several more months of figuring out different taste combinations, things get exponentially more complicated. The baby, now substantially larger than an orange, is starting to decipher signals from the Great Outside: it grew the organs needed for capturing those signals such as skin, ears and kidneys, wired them with neurons, insulated them (somewhat) with oligodendrocytes and put some (although sparse) law enforcement around in the form of microglia. Even the waste management team is at the ready in form of astrocytes! There are thousands of unknown signals in need of sorting, deciphering, and responding to, so the neural network needs a substantial expansion as well.

Touch is the first sense to develop, with lips and cheeks sensitized by week 8 and to other parts of its body by week 14. The sense of taste may develop by week 12 and that of sound by week 22-24. 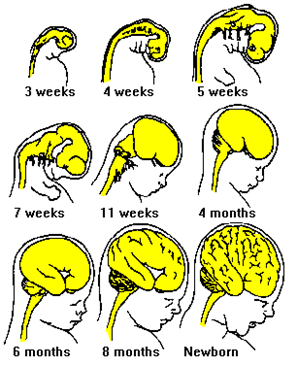 Schematic view of brain development in fetuses. Individual pictures not in scale.

A big cleaning for a better growth

During any building process it is better to have excess material than to be short of it. The same is true in neural development. The brain starts its developmental voyage with excess number of neurons which are still not wired to anything, and, as the complexity of fetus maturation progresses, gain their function by connecting to other neurons or to organs. As the space and connection slots are limited, not all neurons can do so.

Pruning is the process of eliminating and remodeling of unnecessary or misplaced axons and synapses. It is similar to plant survival, where late and underdeveloped saplings have a difficult time finding water and sunlight, and eventually perish. This process first occurs en masse in the developing brain and persists throughout our lifespan. It is essential for the remodeling potential of the brain, its plasticity and flexibility required to adapt to the environment. In the fetus, it is the gain of function and higher order of functions that require pruning (like the sense of taste which replaces the sense of touch in mouth), whereas new skills, experiences and memories trigger pruning in the adult brain.

Apoptosis is the programmed cell death or planned demolition of a piece of tissue. Fingers and eyelids are examples of successful apoptosis on a bigger scale. The same process occurs in our brains on an individual scale, and persists throughout our lifespan, like pruning does. In fetal brains it is essential for freeing up the space of neurons who have not had the chance to attach to anything. They are the stray buildings in need of removal for the new city block to be built.

Both apoptosis and pruning play a great role in improvement and speed of coordination, cognitive skill development and other functions we collectively call experience.

It is hard to imagine the shock, the impact, the quantity of signals being generated from all parts of the now exposed body: lungs, a conceptual apparatus up until now, suddenly start being vital. With them, oxygen gets introduced from a liquid state to a gaseous one. Muscles never used before are needed in full force to maintain some semblance of balance. Skin becomes the shield against the Great Outside, exposed, oxidizing, burning up! Blood flow is needed in greater force to pump the gaseous air everywhere. Food is no longer a readily available resource, it has to be introduced via feeding! Microbes start permeating all over the body, and the immune system is out in force.

The influx of signals and the lack of resources readily available up until this point elevate one thing over every other:

Up until now there was no need to use vocal cords, nor was there a chance for using them. The same goes with limbs, eyes, ears, touch, pressure, and all other senses.

The wires -neurons- were there, but almost no readings were to be had from them. Like instruments invented to catch yet to be discovered tunes.

Once out in The Great Outside, those instruments are picking up a lot of unknown signals, and the neurons relay them to the brain in hopes of any kind of recognition. The newborn is screaming, flailing, doing its best. And besides that, learning cause and effect!

Somewhere amidst this flailing and exploration, a thought is born. "If I flail and whine, I will get food, which means nourishment. Whining is good if I'm hungry".

A penny for a thought

Where is the thought born? Are there neurons (or other cells) responsible for this? Or are thoughts just a giant series of data stitched together? Does it make any difference?

Is the thought process started by the biggest shock in our lives, the overload of up-until-now linear impulses called birth? Or did it secretly start before that?

These questions are still mainly philosophical in nature due to lack of tools, methods and laboratory equipment needed to precisely pin down the birth of that which later breeds creativity, imagination, dreams and shapes our future.

Prenatal development is largely driven by genetic and physical factors, many of which are sensitive to the biochemical makeup of the mother's body. Toxins like alcohol, nicotine and drugs can severely hinder or even outright kill the developing fetus.

On the other hand, postnatal development largely relies on experience, on learning and acquiring causations. Healthy brain circuits need healthy experiences, which, in term, need exposure to a wide variety of stimuli at early age when brain plasticity is greatest, and the brain can store more information with ease!

Wherever the origin of thoughts may be, one thing is certain: only with change can there be progress, and only lethargy nullifies it!

1. Dekaban, AS and Sadowsky, D., Changes in brain weights during the span of human life: relation of brain weights to body heights and body weights, Ann. Neurology, 4: 345-356, 1978

7. BrainConnection.com [no longer in function]