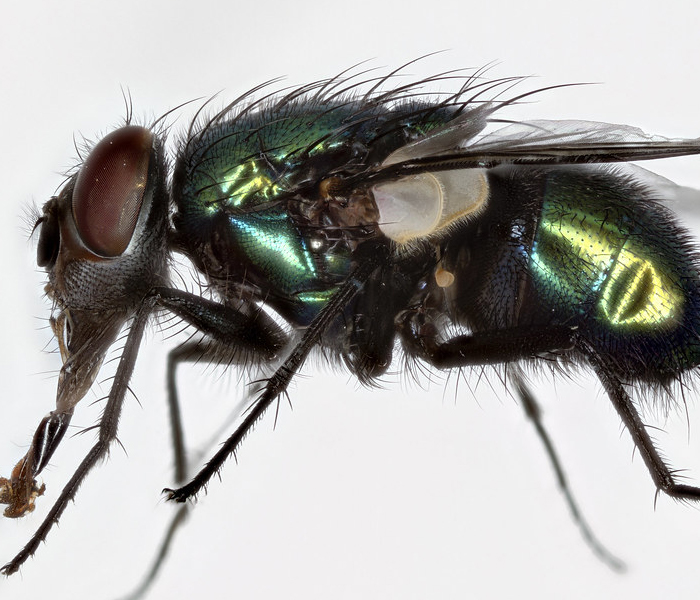 Insects of the dead returns

We saw in the previous article Insects of the Dead that the family of Diptera occupied an important and well-known place in the process of dating deceased persons. Diptera are scavengers, that is, they feed on corpses. In the etymological sense of the term, Diptera in Greek corresponds to Di for two and pteron for wing. They are characterized by a single pair of front wings (front), the rear being reduced to stumps called pendulums. 90% of insects have two pairs of wings.

They have a so-called Holometabolic development, which means that it is divided into four stages. We find the egg, the larva, the nymph during the pupa stage and the adult or imago.

Each species of Diptera has different development times and different times of colonization of the body due to the environment in which the body is found and the temperature. Some necrophagous Diptera are dominant during the early stages of decomposition. This information taken into account allows experts to better assess the date of death and the stage of decomposition.

The Diptera is a molting insect. In order to grow and reach the adult stage, the individual will leave his old cuticle, his external skeleton, to better change his morphology and approach a new cuticle.

The eggs are laid at the level of wounds and natural orifices, such as nose holes, ears, anus, etc. The larval stage, the shortest, which lasts about fifteen hours, follows. The larvae will seek to penetrate under the skin to be protected and to feed better. The second larval stage lasts a few additional hours, while the third extends for a few days. The rate of development of Diptera depends on the ambient temperature, and on the body and the environment. The warmer it is, the faster development will be, up to a certain limit. Each species has a specific development temperature range: when the larvae are mature enough and reach the stage known as prepulps. They will then leave the body to bury themselves in the ground and transform into adults.

To determine the number of days to reach adulthood for a species of Diptera, there is an equation according to Marchenko.

J: corresponds to the number of days to reach adulthood.

c: The constant of the complete cycle. This corresponds to the sum of the degrees accumulated per day.

T: The temperature taken into account in degrees Celsius.

x: the thermal threshold. Below this temperature threshold, the species will not develop.

Example: If we find a larva at an average temperature of 18 ° C of the speciesPhormia reginawe perform the following calculation :

Each species has its own physical characters (phenotypic characters). These characters make it possible to identify a species, Diptera or not, using what is called an identification key which is found in taxonomy books.

Another way of identifying species is possible. Genetic identification which is carried out using sequencing. We take a «sample» of DNA located in the mitochondria (see the article This beautiful heritage of our mothers) and then look at very specific regions of DNA, which will allow us to identify the species. The major advantage of this technique is that it can be carried out with any evolutionary stage of the insect to be identified, but also if it is whole or in fragments. In addition, the equipment required for this type of handling is relatively simple.

Forensic entomology provides valuable insights into the estimate of the individual’s death interval, the causes and circumstances of death. We therefore understand the importance of Diptera during this dating process, which makes them a primordial class of insects in this study. This is why a laboratory analysis (example: developmental study) of individuals found on the body is necessary.