The power of olfactory memory

Odors attract us or on the contrary repel us. It is a meaning fundamental to our survival that causes a real handicap for individuals who no longer have or do not have a sense of smell. An odor is a set of volatile organic molecules which interact with olfactory cells. We can distinguish ranges of odors and varieties of chemical structures. When it comes to human smells, these vary from person to person. Each has a primary odor of genetic origin. Other components related to occupation, stress, illness, diet, alcohol or tobacco subsequently individualize the mixture. Despite significant differences with other vertebrates and insects, which use their antennae to "smell", we notice some similarities.

The perception of odors as well as their distinction are elements that develop early. Olfaction identifies a predator, an individual to reproduce, with a social hierarchy, a food location and an attachment within a couple. The role of odors is very present in many species and has been strongly conserved during evolution.

It is therefore with this sense, olfaction, that we develop, olfactory memory. This type of memory is harder to study than the other two: visual and auditory. It is tested via its recognition and not via reminders. Olfactory memory differs in its resistance to forgetting, events occurring after smelling the odor, but is struggling when the odor appears after a disruptive event.

To smell, the scent molecules interact with the olfactory cilia, which are all connected to cells called olfactory neurons. These neurons are the same age as their owner. 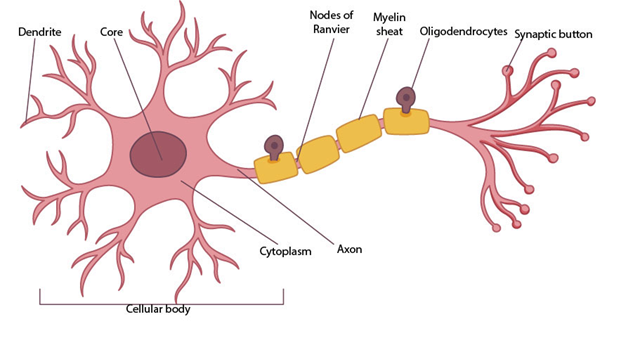 Diagram of a neuron (for more on neurons and the brain, see Myths of the Brain article)

All of them are linked to parts of the olfactory bulb called the glomerulus. 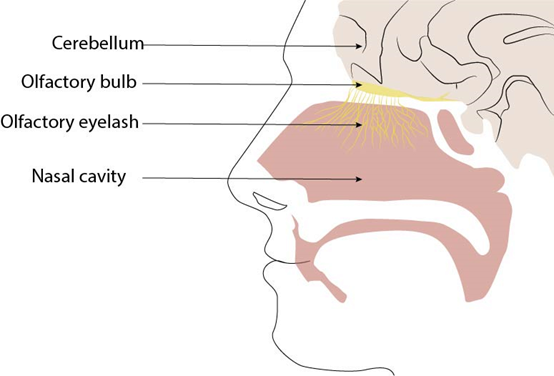 Diagram of the location of the olfactory bulb.

The message therefore does not pass through the cortex. It goes directly to the limbic system, where emotions and memory are managed. Scent information therefore has the power to influence emotions and mood. It is therefore logical that the smells stored in our memory lead us back to emotional sensations. Mammals continue to produce neurons throughout their lives: this is neurogenesis. Studies in mice have shown that signs of neurogenesis are found in the hippocampus (where spatial information is processed) and in the smell.

Diagram showing the location of the hippocampus.

This neurogenesis plays a crucial role in learning and memorization. The production of neurons thus helps to stabilize memory and to acquire and preserve the formation of memories.

But how are smells distinguished by our brain?

This recognition represents the entire transmission of information to the brain for further processing and identification. Living in a constantly changing environment, we need to memorize the many smells that surround us. Exposure to multiple odors can thus improve this discrimination. Therefore, the more we solicit these nerve regions for memories, the more we strengthen the connections but we can also create new ones. However, when two odors are mixed, then the two components are harder to distinguish. It is the same when we find ourselves exposed for too long to a strong odor, our cells receiving these odorous molecules will undergo habituation. We will no longer smell in question.

In the case of diseases and in particular neurodegenerative diseases (where neurons are destroyed), there is an impact on olfaction. Studies have been carried out in Alzheimer’s disease, and it has been observed that there is decreased sensitivity, difficulty identifying smells and failures in olfactory memory. The same observations have been made for Parkinson's disease.

When reading this article, many will wonder what it is about people who have had COVID-19 and have lost their sense of smell. Despite several studies on the subject, it is very difficult to be categorical about olfactory dysfunctions that may or may not be persistent. However, concerning olfactory memory, studies on animals and their nervous activity have shown that there was no trace of infection in the olfactory bulb.

The olfactory memory is constantly called upon. In addition to being an element of survival, it can be used for legal purposes. Indeed, the police and scientific gendarmerie use Malinese breed dogs and German Shepherds to identify traces of scent. The capacity of the dog's olfactory mucosa is 200 cm2 compared to 2.3 cm2 for humans. The odors, as part of an investigation, are then collected on special cottons, placed in sealed jars and then identified by an expert dog three times.

In France, there is no legal odor protection. The fragrances released are considered too abstract to be identifiable by the general public. French intellectual property therefore protects the recipes resulting in the scents in question.