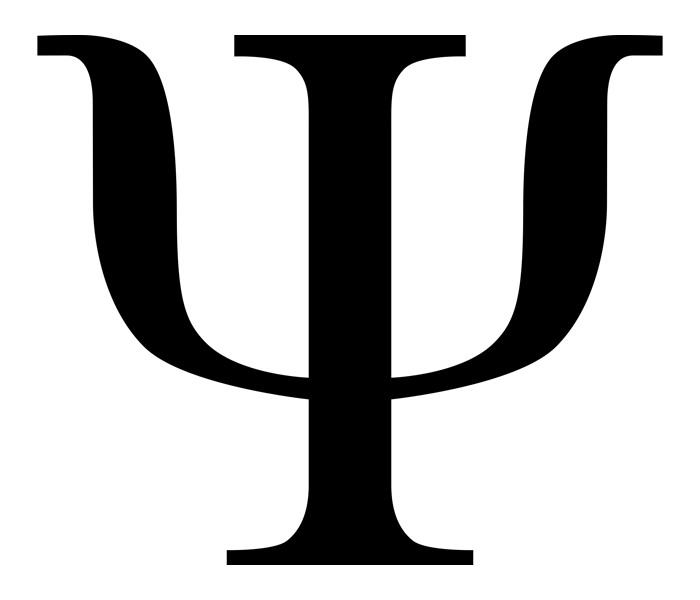 Everybody knows the term "amnesia". But what is it really about?

Amnesias are serious memory impairments. These disorders are caused by brain injury or disease, substance abuse, psychological or mixed mechanisms. There are studies highlighting patients with memory impairment after experiencing highly unpleasant or traumatic events. The traumatic event is poorly memorized and this impacts the memories preceding (retrograde) and following (antegrade) it. The term dissociative amnesia refers to a general memory disorder or a dissociative symptom of another disorder. Negative dissociative symptoms refer to a decrease in memory (amnesia, forgetfulness), while positive symptoms refer to an increase in memory (hypermnesia, precise memories).

The term dissociative amnesia encompasses different disorders in terms of clinical and neuropsychological presentations, as well as many different definitions. Some people experience loss of personal information over several years of life (information retrieval is blocked). Other people may have amnesia involving only parts of the traumatic event (recording of information is incomplete due to emotional over-arousal). Usually, amnesia only affects the stressful time while leaving other aspects of their life intact. It is often claimed that these people can later regain their memory. This theory of dissociative amnesia remains highly controversial, with some authors suggesting it is common and others suggesting that it is devoid of evidence.

The main definition of dissociative disorders is related to trauma or stress. It is highlighted by the 10th edition of the International Classification of Diseases (ICD-10) which suggests that trauma or psychological stress are key players in the causes of dissociative amnesia. Although not an explicit diagnostic criterion in the Diagnostic and Statistical Manual of Mental Disorders 5th Edition (DSM-5), dissociative amnesia is listed alongside trauma and stress-related disorders. . There are two models that view retrograde dissociative amnesias as the result of recovering an impossible memory. 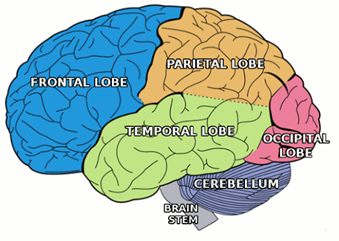 In the first model, Kopelman postulated that psychological stress in combination with other psycho-socio-biological factors impacts the frontal executive system, which is located in the prefrontal lobe / cortex, causing this forgetfulness. In the second model, Markowitsch argues that in retrograde dissociative amnesia, these traumatic events cause the release of stress-related hormones resulting in what is called memory block syndrome. This syndrome is characterized by desynchronization of the frontotemporal regions during memory recovery (including the amygdala and hippocampus), especially in the right hemisphere. This model is supported by studies showing deregulation of the hypothalamic-pituitary-adrenal (HPA) axis in dissociative amnesia, which controls stress responses. 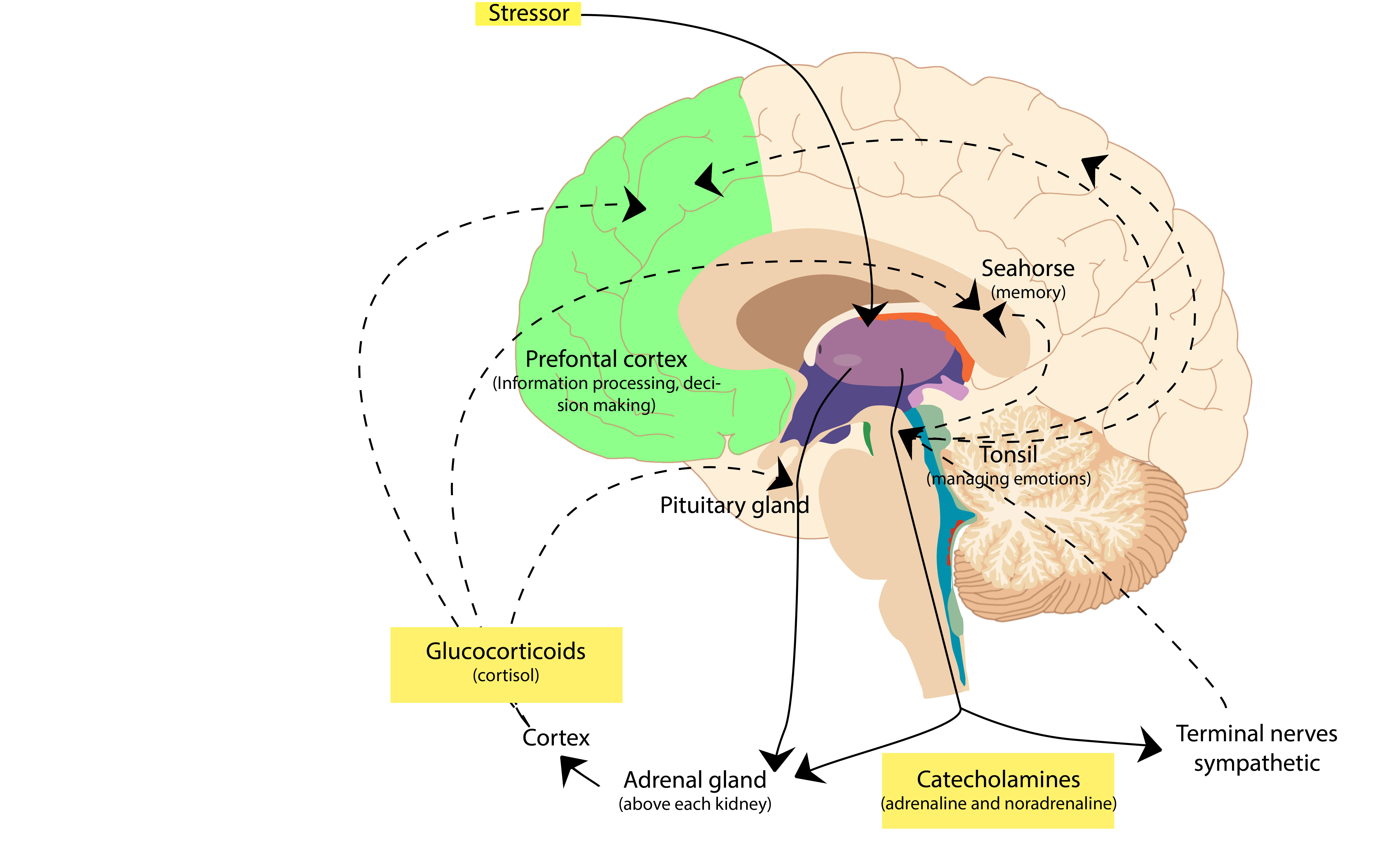 Figure 2
The hypothalamic-pituitary-adrenal (HPA) axis in response to a stressful event, with the impact of glucocorticoids (GC) on the frontotemporal regions.

Additionally, increased levels of acute stress hormones have been shown to affect the retention and retrieval of these memories. 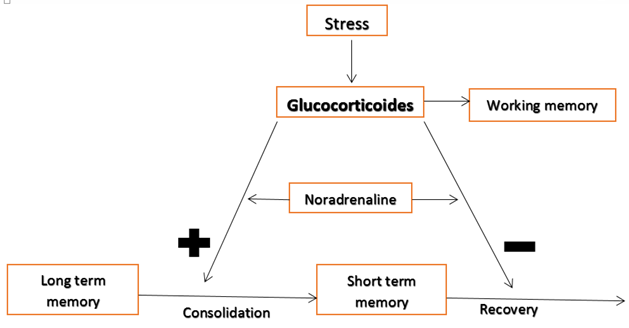 Figure 3
Glucocorticoids increase the consolidation of memories but decrease their recovery. The effect of GC is modulated by norepinephrine (NE).

Finally, several studies that have used functional imaging methods, such as MRI, have provided evidence of metabolic or blood flow changes in areas involved in memory processing in these people, also known as survivors.

Indeed, the memory of trauma victims is disturbed in at least two ways. On one hand, survivors have intrusive memories of the traumatic event in which vivid and repeated sensory impressions and disturbing emotions associated with the event return. On the other hand, they have difficulty remembering important parts of the event. These features are not just observations made by Post Traumatic Stress Syndrome (PTSD) researchers. They are also included as symptoms of PTSD in the Diagnostic and Statistical Manual of Mental Disorders 5th Edition.

In light of the current results, how do you explain that some patients with PTSD have difficulty accessing important aspects of their trauma while at the same time suffering from repetitive intrusive memories of isolated details? The most likely explanation, according to Williams, comes from reduced executive processes (as in depression), in part due to rumination (brooding) and worry or attempts to avoid painful memories. These processes are vital because they make it possible to break habits, make decisions and assess risks, plan for the future, prioritize actions and deal with new situations. At the same time, recent findings with depressed individuals suggest that this forgetfulness does not generalize to intrusive reminders because involuntary recollection involves less executive surveillance. Thus, a patient with PTSD with reduced executive functions may find it difficult to voluntarily access details preceding the event, including (but not limited to) those of the traumatic experience, while still experiencing distress and boasting involuntary memories of these details. 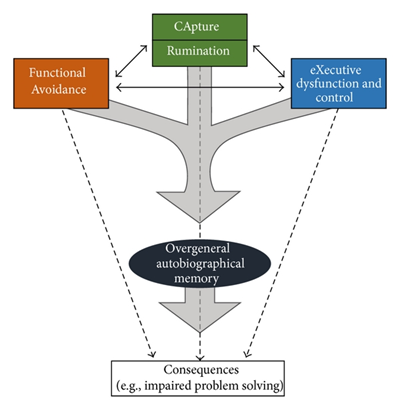 It is good to know that there are solutions. To recover memory, for example, it is important to have a safe and supportive environment. This measure alone frequently leads to a gradual recovery of missing memories. If this is not enough, hypnosis or a semi-hypnotic state induced by adjunct therapy can aid in recovery. Psychotherapy, on the other hand, helps to deal with problems associated with recovered memories of traumatic or stressful events. Once the amnesia is lifted, this support makes it possible to make sense of the trauma or the underlying conflict, to solve problems associated with the amnesia episode, and above all, to allow patients to live their lives more serenely.