Rainbows, as well as peacock feathers are a results of optical phenomenon, called scattering. Figuring out how those light effects behind the scene are happening may rob you of their beauty. Let’s investigate that little phenomenon which beautifies the world.

The answer to those two questions is scattering. We also may answer that it’s mother nature’s magic. But she’s cool and she left us several evidences to better understand her tricks.

Scattering occurs when light rays collide with a particle and this particle diverts the ray. If the ray is redirected in specific direction, it’s called anisotropy. Imagine Sasuke (the one from manga Naruto) modeling his chakra to create the one thousand bird technique, the emitted energy goes in random directions with shape of lightning.

Figure 1: figure of anisotropic of a particle, illustration of the character Sasuke and his technic of one thousand birds.

If the ray is redirected in every direction without difference, the we call it isotropy, as a sphere or a cupola. In manga world we can compare it with version 1 of Naruto’s Rasengan technic.

Figure 2: Figure of isotropic diffusion of a particle, illustration of rasengan technic of Naruto.

The Tyndall effect is more or less like a disco ball (the one from night clubs). Light shines on it, and it scatters the rays in all directions. Those scattered rays can form a shape as a halo around the ball (isotropic diffusion) or just in one principal direction (anisotropic diffusion). However, particles need to have a specific size to enable this phenomenon. 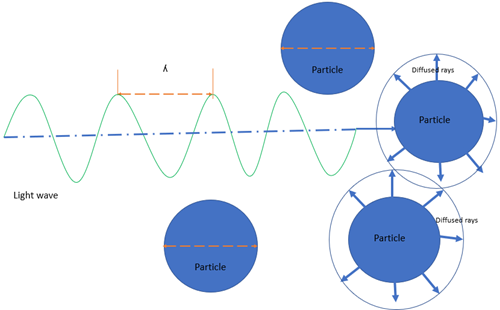 Tyndall effect is seeing the light rays from the sun in a room, when they scatter from the dust. 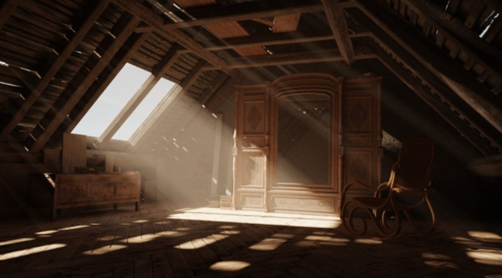 If touched particles have a size equivalent to hundredth of a hair diameter (10nm), close to the wave length of the incoming wave, they can produce this effect. Not all particles behave the same.

Figure 4: Figure of kid on hip pity-hop observed from the above

The electron cloud does oscillate on the same frequency as the incoming beam. This oscillation generates a beam. 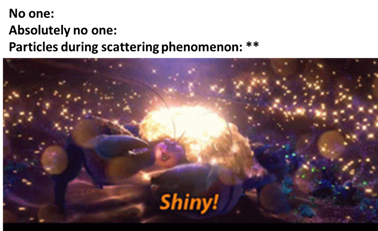 According to a British physicist, Lord Rayleigh: the power of emitted beam is conversely proportional to the wavelength of the incoming beam. The shorter (blue/purple wavelength) the wavelength, the more powerful is the diffused beam. If you irradiate natural light (sunlight) on disco balls, and if those disco balls have a size approximatively equal to a hundredth of a hair size, they will emit a light. The blue part of light will be the most powerful.

Most typical example is the blue sky. Now you know why the sky is blue. there is a lot of small particles in the atmosphere. When they get irradiated with a sun beam they diffuse it, but mostly the blues and purples. Particles will emit blue/purple/green more powerful than others.

The same principal applies to people with blue eyes. 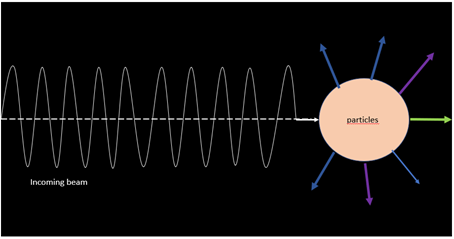 In our eyes there is stroma and pigment epithelium. They contain melanin and lipofuscin which are pigments.

Those pigments are particles which react with the incoming light and diffuse it, when light hits the eyes. This light will give the blue/green color that we see in peoples’ eyes.

Rayleigh diffusion and Tyndall effects are particular forms of a larger theory, called Mie theory. This theory applies to particles with a size between 0.1 and 10 times the of a certain wavelength. If we say that wavelength is equal to average human height (1m70) then particles sizes are between a little rat size (17cm) and two adult anacondas (17m).

Several specific cases of this theory explain natural phenomena like rainbows or colors of peacock feathers. Lorrenz Mie theory enables the use of granulometry, which is the science of measuring particle diameters. Mastering particles sizes may be of great use in medicine production processes of making substances such as powdered or freeze-dried. Particle size monitoring can be done during grinding process thanks to granulometry with laser. Monitoring and adjusting particles size impact the efficiency of medicines.

Scattering has a lot of application fields, as radars and sonars (for backscattering of sound waves). The phenomenon which enables a car to reverse without crashing into another is the same that create rainbows. Understanding this demystifies one part of nature but makes natural phenomenon even more magical.