A new type of therapy has emerged during the past ten years: the immune checkpoint therapies. The efficacy of such treatments has been proven in several cancers. An immune checkpoint is a security check for an immune cell. It is a switch that will turn the cell on or off. These therapies would not have been possible without the development, during the last twenty years, of monoclonal antibodies. Those antibodies look like the usual one produced naturally by our body, but they are designed to aim a specific target on the cell membrane. These particular antibodies play the role of an adhesive tape that you would put on the switch in order to keep it on a “on” or “off” position. Nowadays, those molecules are on trial tests for use in other diseases.

There are several types of cancer which can be classified in two categories, solid or liquid cancers. Plenty of research works have shown a particular immunological environment in solid cancer. Immune cells exist within tumors, but the latter is not eliminated. In other words, the enemies are here but soldiers are not fighting. Healthy cells become tumoral and first they are eliminated since they express danger signals and show new antigens. To visualize this, take a crowd of people with some renegades wearing pink hats (cancer cells). Our soldier (immune cells) will easily detect and arrest them (see article “Immune system ‘s G.I. in action”). However, selection pressure will be exerted on tumoral cells and they will mutate and become immune-resistant. Within the crowd, renegades are forced to change their rallying sign in order to avoid being targeted. They will swap their pink hat and wear a black wristband instead, more difficult to detect. The equilibrium is maintained for a while since tumoral cells trigger an immune response. As long as there is a visual on pink hats renegades, soldiers are attacking. But when only immune resistant tumoral cells remain, cancer progression is inescapable. Moreover, cancer cells show an environment globally immunosuppressive. Renegades are less visible, proliferate and avoid soldiers. 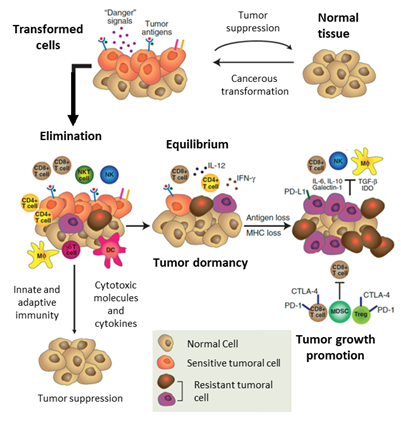 Immune checkpoint antibodies research development has been led at the same time as oncological research. Immune regulation depends on cell membrane receptors. Immune cells activation or inhibition (switch) is related to several signals associated with the presence of those receptors (electrical cables). A functional switch is linked to a reliable electrical circuit with good electrical wiring. These receptors are what define the immune checkpoints.

→ One of the first receptor to be discovered is CTLA-4.Scientists found out that this protein has a role in the down-regulation of lymphocytes, which consists of turning off the cells. CTLA-4 (inhibition=switch off) and CD28 (activation=switch on) have both the same partner CD86. You must picture an electrical series circuit with one cable way that would turn the cell off (CTLA4/CD86) with a stronger intensity that over pass the way turning the cell on (CD28/CD86).

→Another star inhibitor receptor, PD-1, has been quite the talk for the past ten years. PD-1 is located on lymphocyte membrane and interact with PD-L1 on APC or cancerous cells membrane.

In 2018, scientists James Allison and Tasuku Honjo have won the Nobel prize in Physiology and Medicine for their discoveries and research work on CTLA-4 and PD-1. Afterwards, a great amount of research projects has been initiated in order to comprehend and find more about other proteins linked to the immune regulation. Immune checkpoint therapies are basically targeting a blockade within a receptor and its ligand (lock and key). For that purpose, many monoclonal antibodies engineered to aim those checkpoint proteins, just like an adhesive tape that would maintain the switch in the wanted position. Discoveries of Professor Allison and Honjo have resulted in two anti-cancer treatments ipilumab and nivolumab which have been approved by the FDA for skin cancer. 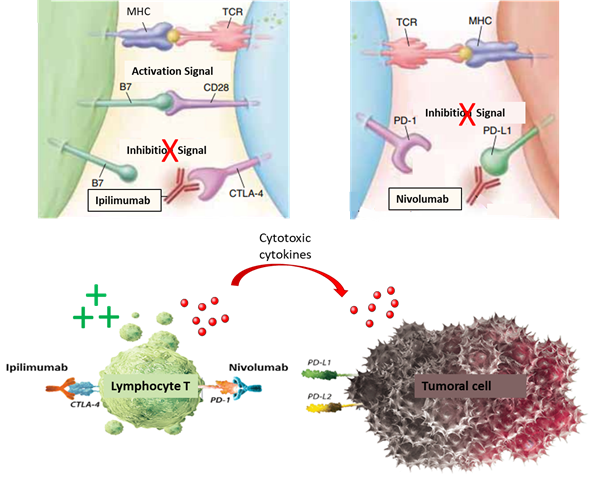 Anticancer immune checkpoint therapies have a great efficacy and many research projects have been started for other diseases such as auto-immune diseases or neurodegenerative disorders. For the average Joe, immune cells are educated to disregard our own antigen in order to not react against us. However, for some people the immune system has not been well trained and autoimmune diseases will occur. In other words, immune cells will backfire on us. For example, in diabetes, immune cells detect pancreatic cells as dangerous for our own good. The infantry (innate immunity) is recruited and release messengers who will also enroll the cavalry (adaptive immunity). In another example, Alzheimer’s disease is a neurodegenerative disorder caused by β-amyloid aggregation. A layer of it will cover the neuron surface and information exchanges will be altered because of neuron disruption and inflammatory cells in the brain. For those diseases, immune checkpoint therapy will aim to decrease the amount of activated immune cells. The activating receptors will be blocked so that immune cells are turn off and that we avoid a chronical inflammation. 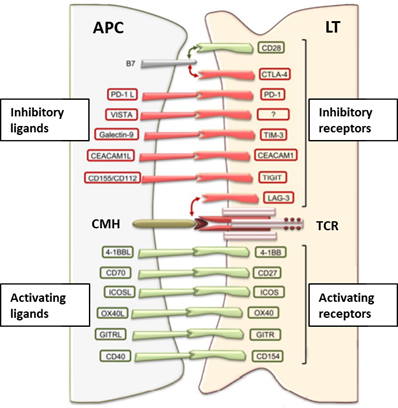 Figure 3: Activating and inhibitory receptors of T cells and their corresponding ligands.

Immune checkpoint therapies have become a major focus in treatments for the future but can also be associated with serious side effects. As a matter of fact, disinhibiting immune cells can lead to autoimmunity, which mainly results in intestinal inflammation, hepatitis and hormonal diseases. At the same time, immune cells blockade could induce immune suppression and a decrease in immune defense may promote a dangerous tumoral cell spreading. Nevertheless, these treatments are a revolution and the preferred treatment in anticancer therapy for the years to come. Pairing an immune checkpoint therapy with the pre-existing treatments would enhance the efficacy of anticancer medications which were previously of little value. That is why, there is a need to fight those adverse effects. For this purpose, many studies to identify markers have been started in order to detect and take care of these side effects.