Neurons at the center of our thoughts

Brain is our most complex organ. Not only do its various inhabitants play such an intricate dance, the tempo of which hasn't been decoded yet, but it is also the organ we think with. The brain is the one who thinks about - the brain.

What is so intricate and complex about it? What drives it to work harder and faster than the heart and produce more chemicals than the liver?

To understand the brain, we first need to familiarize ourselves with its denizens, the layout and the structure.

A fairly simple question - how many denizens live inside of our brain - remained unanswered until recently. In 2005., neurobiologists Suzane Herculano-Houzel and Roberto Lent, professors at the Rio de Janeiro Federal University invented a method to count and sort the various brain denizens, and found out that our brain contains around 86,000,000,000 neurons and 85,000,000,000 non-neuronal cells.

It only took them two years, countless hours of work and a full scholarship to come to this piece of information.

Friendly inhabitants in our brains

The most well-known and most studied are the neurons. They are the wires that run the information fro and to, they relay orders and collect data. Neurons, or nerve cells, are the main component of nervous tissue and communicate with each other and all other organs via synapses.

They can be divided into three categories, each with distinct function and placement. Sensory neurons are the ones receiving data from the outside and inside world. Their elongated arms can stretch to over a meter, if it so happens they innervate hands and legs, and they respond to touch, smell, pressure, light, temperature, and many more stimuli that affect our sensory organs (eyes, skin, etc. ). All of this information is then sent to our brain via the spinal cord.

Once the information reaches a certain part of the brain, it is distributed and deciphered. For that we have a whole web of interneurons whose purpose is to connect to other neurons and ask for their opinion on related matters. By doing so, they create a neural circuit. No matter the neuron type, they all have the same parts, regardless of their look. A typical neuron consists of a cell body or soma, where the nucleus resides, a lot of dendrites and one singular long axon. Soma is the center of the operation, the post office that forwards all the information forth to the tip of the axon, where it connects either to muscle tissue (motor neurons), organs (motor neurons and sensory neurons) or dendrites of another neuron ( interneurons), closing the circuit. Dendrites are small branches propagating from the cell body, and extend a few hundred micrometers. The axon, a singular long branch, can extend more than one meter in humans, or even more in other species. It branches, but maintains a constant diameter up to its tip.The end of those branches are axonal terminals, where synapses reside. They are crucial for signal transfer between a neuron and other cells. It permits neurons to exchange information to another close-by cell by forming tight junctions with the signal usually coming through a long axon to another neuron's dendrite, or to another cell in our body. They communicate with both chemicals and electrical signals, where the electrical signal travels throughout the neuron, excites the molecules stored in synapses and they pass through the synaptic cleft into another cell. 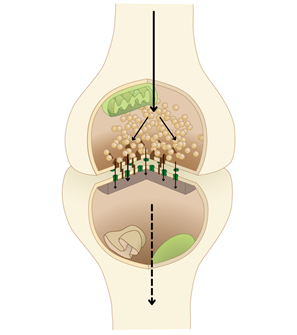 Our body's neurons form the central nervous system which oversees everything. That is our brain and the spinal cord and is the reason we can reason. Peripheral nervous system is the relay from our organs and limbs to the central dome. It is the flow of information, comprised of axons stretching all over our body, covering every part of it and providing us with a monitoring network so we (the brain) could always know what is happening to us (the body). They all meet in the spinal cord, which serves as the ultimate highway from any point of our body to the brain and vice versa.

To make things even more complicated, but actually to ease our daily lives, we also have a totally autonomous peripheral nervous system, connected, but not under control of the central nervous system. This autonomy orchestrates every unconscious action we take, like breathing, beating our hearts, working every organ individually, and thank evolution for that. Imagine needing to constantly remember to beat your heart or to breathe. The autonomous nervous system does it all for us, thankfully. 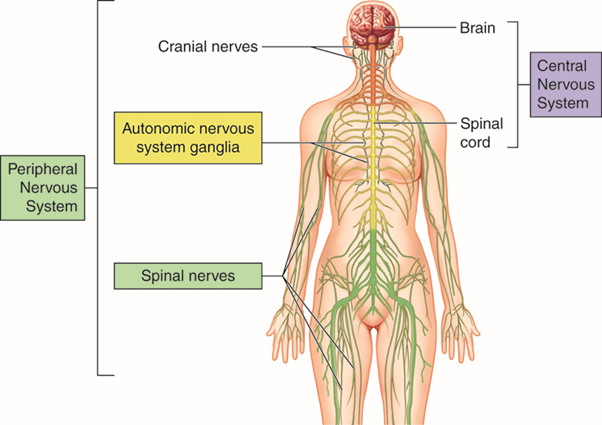 To summarize: information of a hot pan touching your skin travels from your fingertips through a sensory neuron, gets forwarded via synapses to another neuron in the spinal cord and delivered to the brain, where interneurons decipher the electrical signal, distribute the information to correct neural circuit, and send the signal for the appropriate course of action. It travels back through motor neurons to hand and finger muscles, who usually drop the pan right on your foot, and the cycle continues. All of that, in less time than it took you to blink.

Fascination with the human brain and the overall nervous system is on the rise, and with good reasons. Our mental health is constantly bombarded with outside stimuli, especially in trying times such as a global pandemic. The fight or flight mechanism, the evolutionary tool for our survival, is constantly on which causes the usually beneficial, short-term stress, to become a year-long chronic state, where neither the body nor the brain know what to do next. There is no visible threat, and yet, we feel threatened. Both the mind and the body get worn out under such constant stimulus, and this takes a toll on our ability to reason. With both mental health disorders and illnesses on the rise, it is of great importance to get to know our brain better.

This is the beginning of such an endeavor.