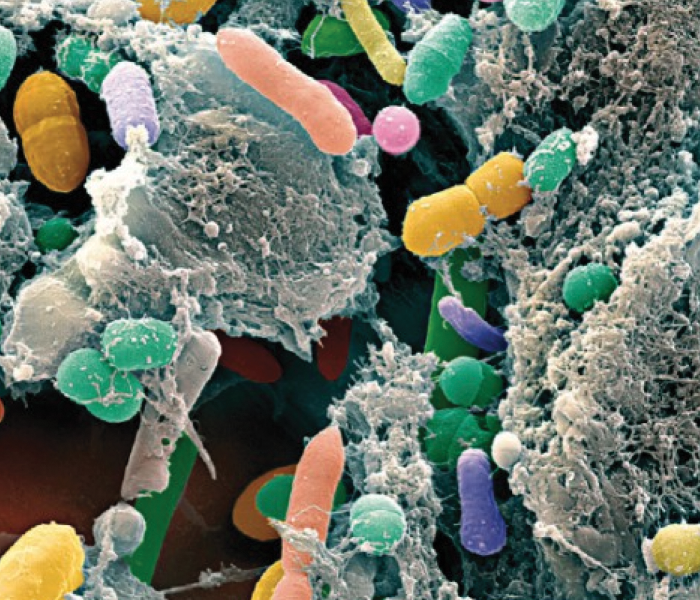 The intestinal microbiota, which weighs between 1 and 2 kg, represents all the microorganisms present in our intestines. It has two main functions: breaking down food for energy from what we have previously digested and building the immune system. These bacteria are essential to our existence.

Today, research on the gut microbiota is particularly active with more than 25,000 articles published as of September 1, 2019.

Several studies have shown that the gut microbiota has an influence on our brain, including our behavior, and vice versa. Alterations in the composition of the gut microbiota linked to several symptoms or diseases have been identified, such as neurological problems, autism, neurodegenerative disorders (linked to the destruction of neurons), stress and cerebrovascular disease.

Diagram of microbiota deregulation and their impact on the brain (Reference: Sibo Zhu et al. The progress of gut microbiome research related to brain disorders. Journal of Neuroinflammation. 2020).

This microbiota is therefore important both for maintaining the intestinal flora (all of the microorganisms living there) and for the proper functioning and development of the brain.

The brain and more specifically the central nervous system have the ability to modify the environment of bacteria living in our intestines, through the regulation of molecules circulating therein as well as immunity.

Diagram of the central nervous system made up of the brain, cerebellum and spinal cord.

Both exterior and interior factors can have an influence, such as eating habits, lifestyle, infection or early exposure to microorganisms. In particular, ingesting too much fat can have a negative impact on learning abilities. Genetic predisposition, metabolism, immunity, and hormones are internal factors.

The composition of the microbiota is also linked to the morphology of the brain. It is necessary for the proper development of our hippocampus, which has a central role in memory and spatial navigation, but also for glial cells (see article on "Myths of the brain").

Diagram of the geography of the brain with the location of the hippocampus.

It is now accepted that the microbiota plays a role in depression and anxiety behaviors. In the article "Stress Hormones", we saw that in response to stress one area of ​​the brain in particular was activated: the PAH or adrenal hypothalamic-pituitary axis.

Diagram of the hypothalamic-pituitary adrenal axis.

This is affected by our genetics, but also by the environment. Research results have shown that our gut microbiota can play an essential role in the development and regulation of our HPA, and thus have an influence on stress-related behaviors.

Although these studies have been carried out on laboratory mammals, as well as in patients, it is necessary to deepen this type of study and to broaden the groups of people studied in order to deduce the impact on stress. .

The intestinal microbiota also has a role in neurodegenerative diseases (where there is a destruction of neurons), such as Alzheimer's or Parkinson's. Alzheimer's is a common neurodegenerative disease. It is characterized by a decline in brain functions affecting memory, language and problem solving. These pathologies ultimately lead to dementia. The role and impact of the dysfunction of the intestinal microbiota is inflammatory (which provokes a defense of our immune system), and is linked to an infection of different bacteria, in particular Helicobater pylori.

Photography taken under an electron microscope and recolorized of the bacterium Helicobacter pylori (Source: badgut.org)

In order to improve the living conditions of patients and as a result of these studies, scientists have developed therapeutic methods consisting of taking probiotics by patients. These probiotics improve the dysfunctions caused by the disease. A probiotic is a collection of microorganisms that are beneficial to our health, such as the bacteria in yogurt.

Patients with Parkinson's disease, associated with inflammation of the intestinal tract, are relieved by the administration of probiotics. This pathology affects 1% of the population over 65 and is linked to genetic (5% of patients) and environmental (95% of patients) factors. It causes tremors, rigidity, difficulty in initiating movements, slowness of execution and poor coordination in people.

Several openings and therapeutic solutions are currently being considered. These studies were notably carried out using various RNA sequencing techniques (gene analysis), in particular with 16S RNA. Molecules circulating between the brain and the intestines are also being studied, while taking into account the ecology of the microbiota, in particular the environment in which it develops and the different populations with their genetic characteristics present there (microbiome). It has been shown that the composition of the microbiota varies depending on the diet and that this could be changed in a day. It is therefore important to pay special attention to our diet. It is believed to be a form of targeted "manipulation" of our gut microbiota that may provide protection to our brain and lessen the negative effects of times of stress, and periods of development. Several therapies use probiotics as tools. However, in humans, this type of study remains complicated because of the multitude of parameters to be taken into account by researchers: the exposure of the individual to a probiotic, his diet, his environment and socio-factors. economy in which it lives. Far from being perfect, this approach nonetheless arouses strong enthusiasm in the scientific community around neurodegenerative diseases. Indeed, she uses it as an aid to be improving the patient's living conditions, but also to make a diagnosis.

This area of ​​expertise also opens up new markets and promotes the emergence of start-ups. The agri-food market is tending to enter this niche by seeking to produce our food of the future, which could influence our microbiota to prevent or cure possible diseases.