Protectors of the neural system as complex as their names: Oligodendrocytes

What we envision when somebody mentions the brain is a tangle of neurons exchanging information at tremendous speed, sparks of electricity racing through them, figuring out what our next move will be and how to behave. With all those sparks, there is certainly going to be a fire. Preventing that, and much more are the oligodendrocytes.

Derived from several words of languages ​​long gone, oligodendrocytes are visually what their name implies: oligo = few; dendron = tree; cytes = cells. Their literal name menas „cell with a few branches“ (or trees). They are support cells that provide insulation and three-dimensional stability and care for 86,000,000,000 neurons, and occupy a portion of the 85,000,000,000 non-neuronal cells in every human brain.

Much like with electrical wires, neurons exchange information via electrical impulses. If such charged wires were to touch one another where they aren't supposed to, a lot of bad things could happen, ranging from loss of information to a total blackout. Luckily, our oligodendrocytes have us covered. However, more precisely, they cover our neurons. Their main body extends a number of branches (or trees) that wrap around neural axons in the central nervous system, much like an insulation cable wraps around a copper wire. This protective layer is called myelin, and it is essential in helping the flow of information to arrive safely and securely to its destination. 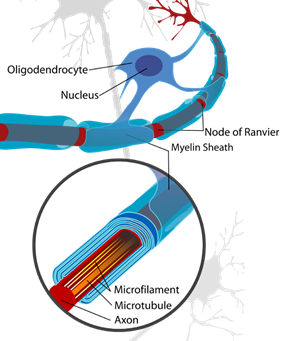 Myelin is a lipid-rich (fatty) compound that helps increase the stability and rate of electrical impulses traveling through axons. Its distinct milky white color is the reason our brain is divided in white matter and gray matter. White matter is the region where most of the myelinated neural axons reside, providing the white contrast, whereas gray matter contains mostly neuron cell soma (bodies). The insulating role of myelin is essential for normal motor function (movement), sensory function (feeling cold, seeing, hearing) and cognition. It is present in form of myelin sheaths, each covering approximately 1 µm of the axon and forming a semi-continous insulation separated by short gaps called nodes of Ranvier. They function like a tunnels exhaust system that funnels excess information and infuses environmental stimuli into the axon-myelin system.

Oligodendrocytes are the last cells in our brains that fully form and mature. Whereas most of the other cells undergo their maturation in the fetal period or shortly after birth, oligodendrocytes wait untill the groundwork for the 3D structure of the brain is done, and then start reinforcing and insulating it. Myelination is only prevalent in a few brain region at birth, and continues extensively all the way to our late 20s. This has many implications human mental development, their ability to study, but also to change their behavior, thinking and habits. It has been suggested that the presence of myelin positively correlates with IQ in children, and mental prowess in elderly people.Their ability to propagate electric impulses (flow of information through neurons) is also one of the reasons newborns are slower to react and seem to lag behind outer stimuli. As their neurons get more and more myelinated, the newborns start crawling, walking and understanding language patterns.

As the neurons form new connections and we learn more information, some of this three-dimensional structure the oligodendrocytes support will need to change. One of the major influences oligodendrocytes exert outside signal propagation is the brain's plasticity. It is the ability to mold and modify itself as new information, new experiences and conclusions present themselves. In other words - it is the ability of the human brain to continually grow, not just in size, but in content. This means that oligodendrocytes' work is never finished, and it is our new experiences and their reorganization ability that makes us smarter. So ask yourself: when was the last time you did something for the first time? 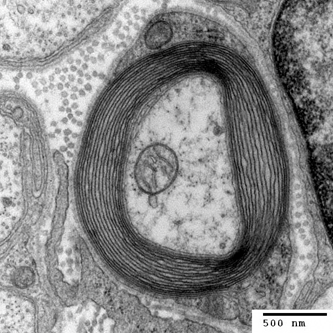 Schwann cell myelinating an axon in PNS, with its body in the upper area. Credit: Roadnottaken

Loss of myelin can lead to a number of diseases and conditions that are untreatable to this day. One of the most prominent is multiple sclerosis, in which the myelination is disrupted either by the oversensitive immune system, or as a failure of oligodendrocytes and Schwann cells to excrete myelin. Body trauma, such as spinal cord injury, can also cause demyelination, as well as some viruses. In all cases the symptoms are similar, and treatment includes improvements of quality of life and damage control.As demyelination disrupts signal transfer and communication, symptoms include physical (blindness in one eye, muscle weakness, sensation and coordination dificulties), mental (loss of functions in brain, forgetfulness, loss of memories) and sometimes psychiatric problems (mood changes, hallucinations) .

With lack of insulation, deterioration of neurons follows, which leads to more severe problems, such as paralisys of body parts.

Several studes have been made trying to transplant healthy Schwann cells in attempt to induce remyelination in multiple sclerosis patients. Their transplantation has also been tried in spinal cord injury, both for aiding regrowth of axons and their remyelination, with limited success.