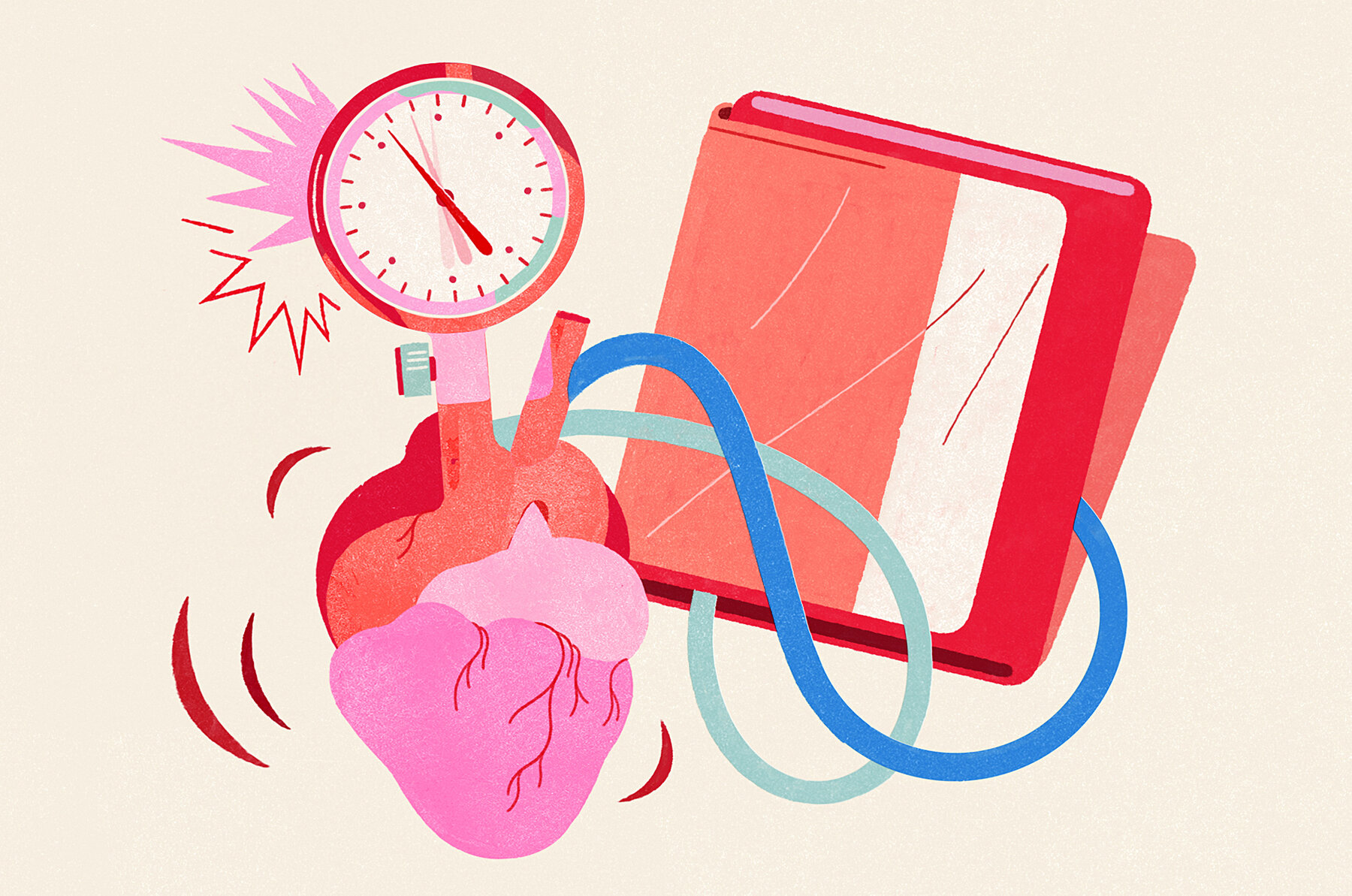 Controlling blood pressure is not an easy task. Whether proverbially, by controlling our emotions, or literally with medication and diet. A stable blood pressure of 120/80 is necessary for both mental and physical health.

As a reminder, blood pressure is a combination of factors that indicate how strongly the blood pushes the walls of our arteries. It is dependent on the strength of our heart's squeeze, its frequency, the volume it can eject, and the thickness of the blood. A whole article has been written about it. 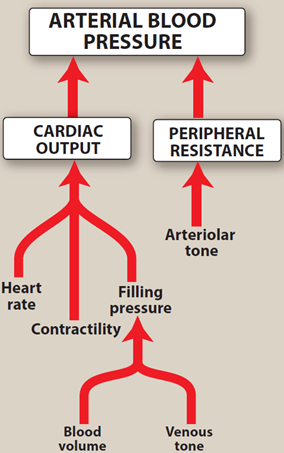 To get the blood pressure under control became synonymous with bringing it down. Indeed, more than 90% of patients who suffer from aberrant blood pressure have it too high, rather than too low. This is to be expected however, due to modern diet filled with salty and fatty foods and the nature of the blood pressure itself. A proverb in favor of this claim goes: it's easier to add salt to the soup than to remove it. The same goes with blood pressure – it is much easier to elevate low blood pressure than to lower it back.

People with low blood pressure are said to have long, but ardurous lives. And, as a bit saltier food or some additional exercise can regulate it substantially, no medication is usually needed. Yet, those people tend to suffer from mild, yet persistent side effects, such as cold hands and feet, lack of energy, drowsiness, vertigos, lack of sexual desire or acute impotency. Lower blood pressure is also often found in athletes and divers, due to the nature of their occupation.

The higher they rise

High blood pressure can be a side-product of any of the pathways in picture 1 malfunctioning. Additionally, there are some environmental factors that can also elevate blood pressure. We will try to go over drugs that regulate them in order, and see how they interact with the mentioned pathways. Those drugs can have a direct impact on the cardiac activity, such as antiarrhytmics and drugs against angina pectoris and cardiac arrest; or can have an indirect impact on the cardiac activity, regulating the peripheral factors. This category contains antihypertensives, diuretics, anticoagulants and antihyperlipidemics.

The harder they fall

A group of drugs called ACE inhibitors help with this problem by inhibiting this enzymatic system, lowering the amount of aldosterone release by stopping angiotensin. These drugs are efficient, and one of the most widespread drugs for blood pressure regulation.

Another prominent group of drugs are called β-blockers. When the blood pressure rises due to sympathetic activity (muscle strain and exertion while we are awake), it is due to activation of β-adenoreceptors on the heart and kidneys, which increases the cardiac output, blood volume and venous tone. These β-blockers help mitigate the unwanted activation of adenoreceptors by binding onto them and rendering them useless for a period of time.

Third group of drugs are called diuretics, and help by simply lowering the amount of water in the bloodstream. They do so by either increasing the filtration rate of the kidneys, or by lowering the sodium concentration in the blood. If high blood pressure exists mainly due to this problem, an effective way of lowering it might also be a diet containing low amount of salty and fatty food as they increase the blood volume via water retention. 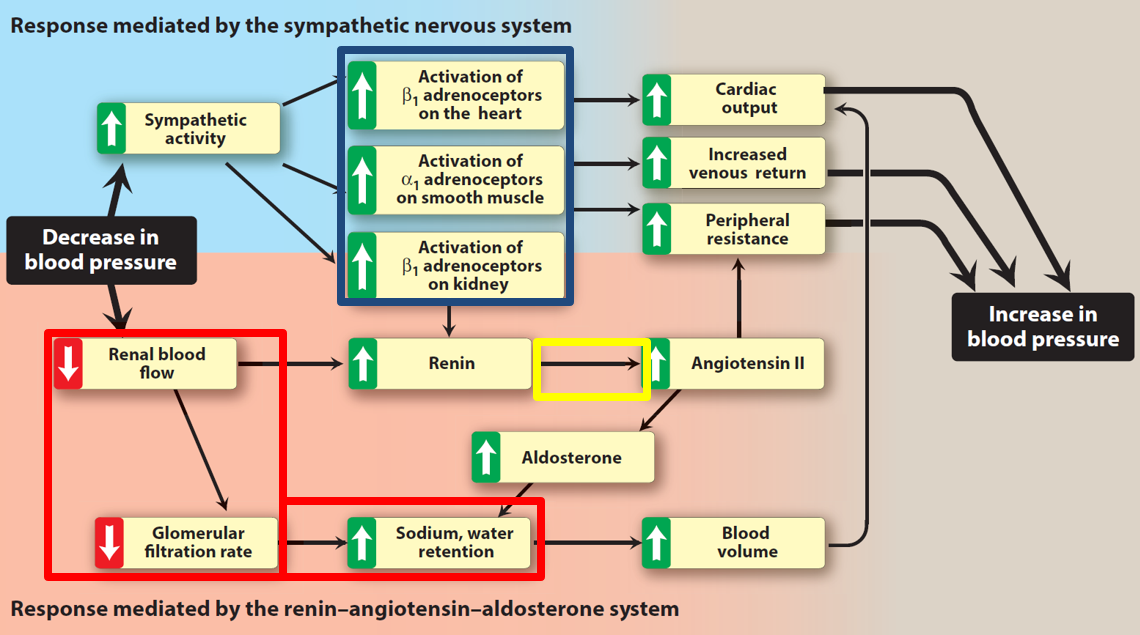 Picture 2: schematic overview of the blood pressure factors. As the sympathetic activity rises, the adenoreceptors activate and increase cardiac output and blood vessel constriction, increasing the blood pressure. Additionally, when the blood flow through kidneys slows down, blood retains more sodium and water, which increases its volume. Lowered renal blood flow, together with activation of kidney adenoreceptors also increases the activation of the Renin-Angiotensin-Aldosterone enzymatic system, increasing the blood pressure as well. Diuretics actively suppress blood pressure factors outlined in red, ACE inhibitors the conversion of the Renin-Angiotensin-Aldosterone enzymatic system outlined in yellow, while β-blockers act on the ones outlined in blue.

Anticoagulants are another potential drug group for treatment of high blood pressure. Their main activity is to „dilute“ blood while preventing coagulation.
Coagulation is crucial for wound closure and the onset of scabs via thrombocytes, but if left unchecked, they can spawn thrombs – placques of thrombocytes on blood vessels, or emboli – placques of thrombocytes in the blood flow. Both can disrupt blood flow and elevate the blood pressure by elevating blood volume. One of the most widespread drugs in history is acetylsalicylic acid, better known as aspirin, which both alleviates pain and inhibit trombocyte production.

Drugs that have a direct impact on cardiac activity are used to treat problems such as arrhyithmias, angina pectoris and cardiac arrest.

Another subgroup acts on the aforementioned β-receptors in the heart, lowering the overall sympathic activity, having the side effect of sleepiness, drowsiness and lack of energy.

The last groups modify the frequency with which the electric impulse can be propagated through the heart tissue. The longer the signal needs, the slower the heart pumps, and the arrhythmias cane be brought under control.

Angina pectoris is a specific onset of pain that propagates when the heart tissue lacks oxygen. This can happen due to thrombosis, lack of blood vessel tension, or as a result of previous injuries, both mechanical and chemical. All drugs combating this are based on the need to increase the oxygen flow through such tissue, or lowering the oxygen need of such tissue by lowering the heart rate, contractility and overall metabolic needs. The ones most widely used are organic nitrates, which relax the smooth blood vessel muscles, which lowers the venous tone and filling pressure. They have a rapid onset and can be real life savers.

Cardiac arrest is an extreme case of angina pectoris and is best avoided by regulated and strictly monitored medication. If, however, the arrest happens as a consequence of atherosclerosis, myocard infraction, long lasting hypertension or some congenital malformations, the goal is to mitigate the damage and help maintain blood flow until a surgery is possible.

The fight against high blood pressure is long and stubborn, especially because the effects are cumulative, rather than rapid, and the human nature easily dismisses them. This article is a short sum of potential mechanisms by which it can be treated. So the next time your grandparents ask you to read them what's on the label of an antihypertensive medication, you'll be better prepared to give them some explanations and maybe even get them interested in other Cortex articles!