Animals use their olfactory system to find and select food or prey, to recognize their mates and partners, predators or surrounding toxins, but also to orient themselves and communicate. People have understood the advantages of this super power and use it in canines for different purposes.

How does it work in a dog?

An average dog inhales 30 ml of air per nostril per sniff. This is the equivalent of a small bottle of toilet water per nostril. The air enters from the front and is exhaled from the sides. Its olfactory capacity is both qualitative and quantitative: the concentration of the odor in the air and its quality are therefore both taken into account. 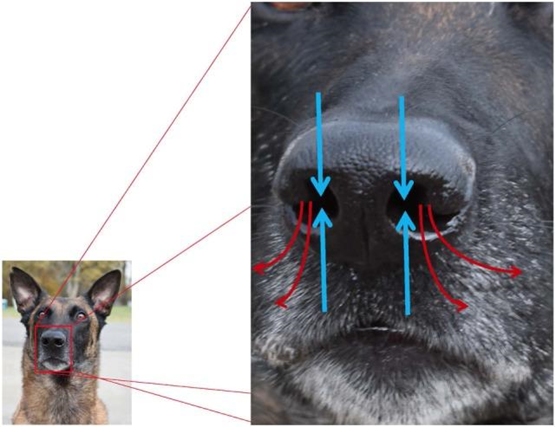 A small specificity that we humans do not have is the ability to sample the airflow collected separately in each nostril. It is said that there is a bilateral comparison of the intensity of the stimulus and the location of the source of the smell. Each nostril analyzes and delivers its result on what has just been inhaled.

The right nostril processes new, threatening or existing stimuli (information including odors, pheromones, and similar), while the left nostril processes messages containing familiar or non-unpleasant odors such as food. It is the same for the right hemisphere of the brain which processes new information and the left hemisphere which, roughly speaking, oversees the responses related to the behavior towards familiar information.

As you may have guessed, dogs have a much higher olfactory capacity than we do. Their detection capacity is 10,000 to 100,000 times greater than that of humans. This can be explained initially by a genetic and morphological difference. But be careful, not all dogs are equal in their olfactory power, which depends on different parameters.

We versus our four-legged companions

If we are to compare our olfactory capacities to those of a dog, which is not at all comparable scientifically since we are two different species, we know that we, humans, have 25 cilia per olfactory receptor cell (cells in charge of capturing olfactory information), whereas the dog has more than a hundred. This allows them to detect much lower concentrations of odors. Another major difference, as depicted on the diagram, is the surface of olfactory epithelium. The dog's is much more extensive, with 30% more olfactory receptors, allowing it to recognize a greater variety of odorants.

Dogs also have the ability to localize odors, even in the presence of a stronger one in the foreground. Scientists believe that this is due to the size of the nasal cavity compared to other species, but also to the type of airflow caused by the nostrils during inhalation Moreover, this distinction between background odor and odor that the dog targets is made at the level of the olfactory bulb. It is a sensory modulator. 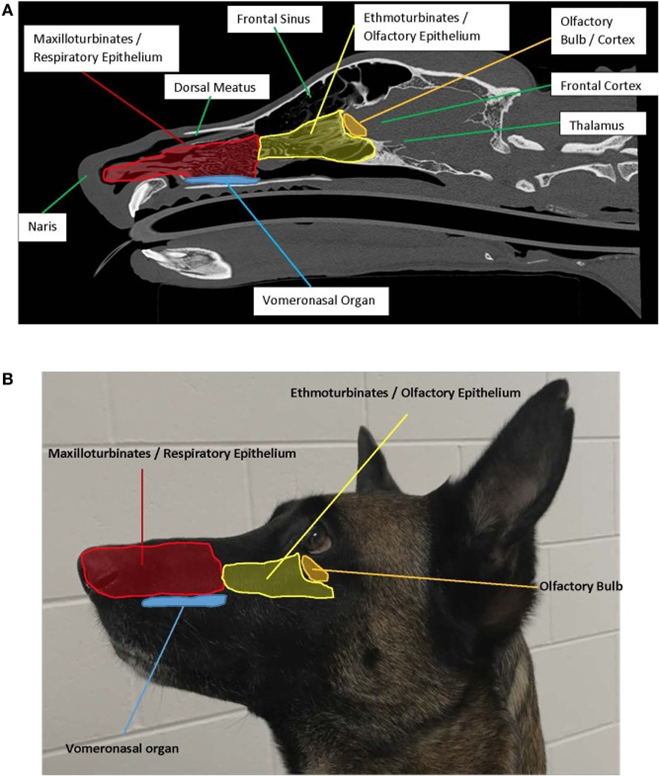 The last particularity of the canine is that air does not enter or leave the olfactory cavity during expiration. This results in a prolonged exposure of the inspired air to the cells of the olfactory epithelium and thus to the nerve cells that allow the transmission of the odor information to the brain. In simplified terms, dogs store odors in their large cavity for better analysis. This does not prevent them from breathing at the same time.

A wide choice of jobs

A wide range of jobs is available to dogs, and this from a very young age in order to find their way quickly and be as well trained as possible.

The first job is the detection of explosives. In France, it is carried out by dogs, mostly by malinois. In Africa, giant rats are also used. The hardest part of this specialty is to ignore the stray odors, to target the right molecule among the others in the explosive and to locate it. Not to mention staying calm with the hubbub and bustle that can be generated around. These units can be found in train stations under the name of SUGE (sûreté ferroviaire, or SNCF railway police).

Dogs are also trained to detect drugs such as cocaine, heroin, methamphetamine and marijuana.

There is also the so-called biological detection in order to follow the path of a person or to recognize him. For example, in a busy downtown area, it is possible for a dog to track a person within 48 hours with an accuracy of 77.5%.

There are also canine units for search and rescue, rockfall or avalanche, and corpse detection. Whether it is for bones or body fluids and tissues under the ground and in water. The rescue dog will perform better in high humiditydue to improved nasal moisture and scent trapping.

Working dogs are used for detection purposes in agriculture or species conservation. They can detect tree snakes to control and prevent their spread (as they are an invasive species),  termites, microorganisms such as cyanobacteria that can affect the breeding of catfish, but alsoendangered species. These are the "scat dogs". They find and follow the scats, and thus allow biologists to have a non-invasive method to study the sex, diet, species, parasites and individual character of the "tracked" animal.

Finally, trained dogs can be used in the medical field. The big challenge is to target the concentration of disease-specific molecules. They are then said to use the volatilome, a volatile organic compound (present in the body) as a reflection of the current unique health status. It can be used to detect diseases or pathogens such as hypoglycemic breath, detect malaria or types of tumors. During the COVID period, it has also been attempted to use dogs in screening. Dogs can detect diseases in other animal species as well, we are no exception!

Detection as a game

In order for the canine to detect what is needed, it must be presented as a game. The search position is nose down and tail up. It has been shown that they can learn and identify more than 10 smells in a search task, learn and memorize 200 words and the names of over 2,000 toys.

As you can see, genetics and breed are not the only elements to consider for a dog to be efficient in its task. Performance is based on both its anatomy, but also the dog's ability to communicate information and therefore its bond with the owner. If the four-legged worker is bored, tired or lacks stimulation, or even lacks a proper bond with its master, it can affect the outcome.

Another crucial point is that its microbiome (the bacteria on and in him) must be balanced. It is necessary that the dog is clean, well cared for and has a good diet.

The range of possibilities offered by the detection capabilities of our four-legged companions has surely not finished surprising us. With a growing presence in the judicial and medical field, progress is to come in the next few years, along with specific legislation for our canine collaborators.

Stars of the brain: astrocytes