For more than half a year, our life has become a Hollywood disaster movie like Contagion (2011) from Steven Soderbergh. The events that took place in December 2019 were almost too similar for comfort, and for a good reason. The screenwriters had chosen to collaborate with two great epidemiologists, Dr. Larry Brilliant and Dr. Walter Ian Lipkin to write the movie. In the realm of Corona, just like princess Rapunzel, we all had to be locked up in our small unreachable tower. Unfortunately, a stroke of a pan will not be enough to put the coronavirus down. Since a cohabitation seems to be inevitable, we should learn a bit more about this squatter.

The emerging diseases’ pattern transmission described in this article is applicable to many viruses. It often starts, with zoonosis, a pathogen transmission from man to animal or vice versa. Bats are an example of those zoonotic species, just like birds or pigs, with bats being a natural reservoir for many viruses. They are infected with viruses but show no sign of illness. Indeed, bats have by nature a very competent immune system and they are the only flying mammalians. This flight activity induces a strong release of inflammatory molecules, which, , if not contained, could induced a cellular destruction in those animals (see article « Immune system ‘s G.I. in action » from Anne Clerico). Thus, bats have, during years of evolution developed mechanisms to neutralize those inflammatory molecules. They are able to incapacitate the virus and moderate the inflammation which leads to a virus persistence without its elimination.

Adding to the host reservoirs, there are intermediate hosts which have been in contact with the infected bats. Those intermediate host do not show any sign of illness either but the viral genome is mutating. It will lead to a genetic recombination within the virus which could eventually cross the species barrier and infect human. In case of emerging SARS-CoV-2, the recombination was made between coronavirus RaTG13 genome from a bat (Rhinolophus affinis; natural reservoir) and coronavirus MP789 genome from a pangolin (intermediate host). This last part is still hypothetical since the animal involved in the species barrier crossing has not yet been identified. To make things worse, the living animal market in China involved with the emerging disease has been immediately and conveniently shut down and no sampling could have been performed. Eventually, some would also suggest that the virus was made in a lab and not from a natural recombination and, just as Jon Snow, we know nothing. 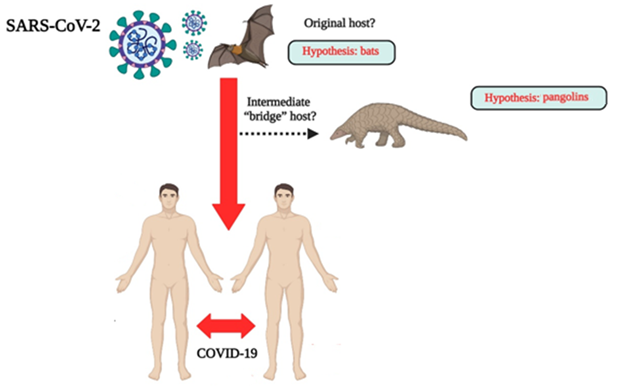 Figure 1 : Illustration of hypothetical infection chain by SARS-CoV-2 between human and animals

The public enemy number one

Viruses can be found within every animal, plant, and bacterial species. André Lwoff, a french biologist and winner of the Nobel prize in Medicine (1965), defined four viral features in 1953. « 1) A virion encloses neither cytoplasm nor nucleus […]. 2) A virion contains only one type of nucleus acid, DNA or RNA, never both. 3) A virus cannot grow or divide and reproduces itself only from its genetic material. 4) Viruses are the absolute cellular parasite. » A virus has an inert form (virion) in the extracellular environment but as soon as the infection occurs, the virus will hog the host’s cellular replication machinery. Once under its control, the virus makes its replication the cell’s topmost priority and starts replicating by millions in matter of hours. 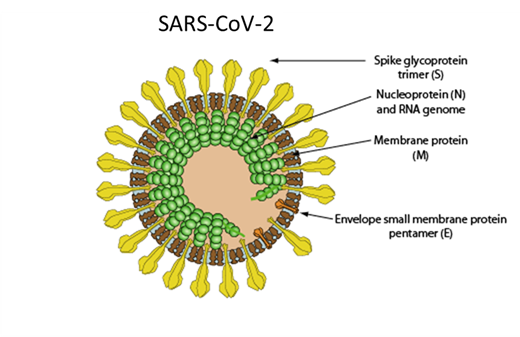 The etymology of the word coronavirus comes from the Latin corona, which means crown, and refers to the structural proteins on the virion’s surface. Almost all coronaviruses target the cells that cover the insides of lungs and bowel (pulmonary and intestinal epithelial cells). Therefore, the resulting diseases are mainly respiratory diseases and gastroenteritis. Betacoronaviruses are the ones infecting the most species and SARS-CoV-2, which is accountable for the actual pandemic, is a part of this family. SARS-CoV-2 is an enveloped virus with a positive single strand RNA (ssRNA). The viral RNA contains the entire genomic information necessary for the virus replication, the same role as our DNA plays. The virus is made from envelop proteins, membrane proteins, Spike protein which enable the adhesion to the host infected cells and, of course, the genome virus inside.

The favorite SARS-CoV-2’s target are our pulmonary cells. The virus has two means of entry within the host cell, either endocytosis, wrapped in a bubble, or a simple membrane fusion, to deliver its genetical material. A ssRNA+ means that it will be immediately taken care of by the host ribosomes proteins. The ribosomes read the RNA strand and, just like a 3D printer, will assemble the proteins. It will allow the immediate translation of important viral replication proteins such as  RNA polymerase in order to reproduce RNA strand. Humans do not have this protein by nature and our RNA polymerases are DNA dependent since our genome is a DNA double strand (see article « Messenger RNA, this new hero» and « Protein, this unknown star » from Tatiana Grouin). The virus will then assemble itself and exit the host cell with the purpose of infecting other pulmonary cells.

Coronaviruses are all around us and are responsible for some common colds in winter, where the infection affects the superior respiratory tract, and does not cause a lot of damages. However, if the infection happens in the inferior respiratory tract or within the lungs, critical diseases such as bronchitis, pneumonia, and severe respiratory impairments can occur. SARS-CoV-2 is not the first betacoronavirus which led to human critical and lethal diseases. In 2002, SARS-CoV triggered the SARS disease (Severe Acute Respiratory Syndrome). In 2012, MERS disease (Middle East Respiratory Syndrome) emerging from MERS-CoV, worrying the World Health Organization (WHO). Both diseases showed fever, cough, and respiratory problems. Most of the people dying from it were weakened by other medical conditions or of advance age. Those two diseases combined accounted 1700 deaths worldwide, but the toll of COVID-19 (COronaVIrus Disease 2019) is much worse, with 3,91 million of casualties and still going. The particularity of the COVID-19 are asymptomatic cases, healthy carriers of the disease who spread the virus without realizing it. Furthermore, the disease transmission is easier and the ratio between dead and infected people is lower than the previous emerging respiratory syndromes, which mean the virus can be  spread more easily. About 80% of infected people present mild symptoms but, in some cases, there is too much fluid accumulation within the lungs and a hospitalization is needed. This state of respiratory distress can induce a hyperinflammation leading to a cytokine storm syndrome and an unrestrained immune response. Currently, the only effective treatment seems to be corticoids intake.

There is a growing concern for emerging diseases within the WHO. Reckless deforestation and global warming force wild animals to move closer to humans. Those wild animals, acting as potential hosts, play an important role in recombined virus emergences. Living animal markets are the ideal place for fostering zoonosis. In order to prevent the risk of developing new emerging diseases, many health professionals, epidemiologists and virologists study viruses evolution continuously.