Mastering light is an art. Wether at the local supermarket to tempt us, to improve the preservation of products or even to grow fruits and vegetables, light is now everywhere in our food chain. But is it for the best ?

Have you ever noticed that camembert is not necessarily illuminated in the same way as sea bream while doing your shopping? Or that the ham you just bought sometimes seems duller once you get home? In order to be showcased, each type of product requires specific lighting. What are the different technologies implemented ? Let’s try to shed some light on this question.

The colour palette of our world

White sunlight consists of a multitude of colours that we can distinguish when a rainbow appears: this is the visible spectrum. These colours are actually our brain’s interpretation of the radiation emitted by the sun, which correspond to certain wavelengths measured in nanometer (nm). Our eyes are able to perceive wavelengths ranging from 380 nm (purple) to 780 nm (red). When an object is lit by the sun, it absorbs a part of the light radiation and reflects only certain wavelenghts, which define its colour. Let’s take a random object: a lettuce. It appears green because it absorbs all wavelengths of the visible spectrum, except green, wich said lettuce sends back to our eye exciting the cone cells of our retina.

To each their own light: warm or cool

The following levels are generally considered:

The luminaires containing light-emitting diodes (often called LEDs), which now equip a large part of our stores, are easily manufactured in different color temperatures. The easiest and most economical way to get white light is to use a monochromatic blue LED (around 460 nm) covered with a layer of luminophor (also called «phosphor»), a specific sort of powder deposited on the surface of the LED. The most widely used phosphor has the sweet name of «YAG:Ce3+» for «Yttrium aluminium garnet doped with cerium». By passing through this substance, a portion of the blue light is converted into colours ranging from green to red, partly reconstituing the white light spectrum. The richer in blue  the LED’s emission spectrum is, the higher is its color temperature (cool white), and vice versa. This parameter can be adjusted through the thickness and composition of the phosphor. 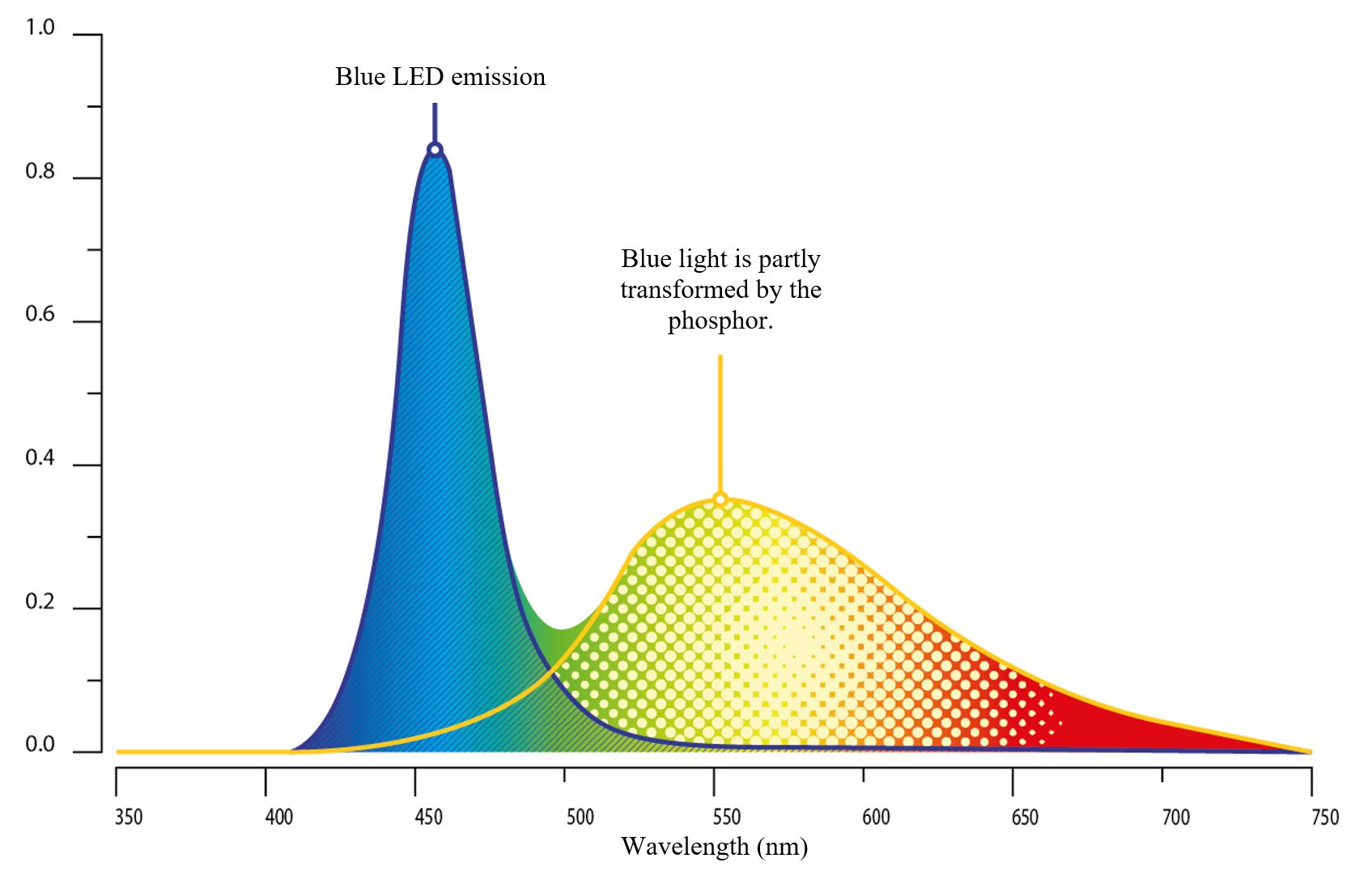 Emission spectrum of a white LED

But let’s go back to our stalls. The warm shades of breads and pastries, cheeses, potatoes, or even wines are more enhanced under «warm white» lighting (low color temperature), which is richer in wavelengths ranging from yellow to red. Conversely, the white flesh of fish placed on an ice stall is much better enhanced under «cold white» lighting (high color temperature), which is richer in wavelengths close to blue.

But what type of lighting is applied on fruits and vegetables, whose varied colours range from the red of strawberries to the blue of blueberries, passing through the green of lettuces (and let’s not talk about peppers)? A warm to neutral white is generally used. however, there is another way to enhance Brussels sprouts.

A color rendering classified by index

White sunlight is ideal : thanks to it, we can see all the shades of colour in the world around us. However, some light sources created by humans do not allow to distinguish correctly some colours : they can appear duller, or more saturated.


To characterize the ability of a light source to rend colours, the Color Rendering Index, or CRI is generally used. It is evaluated by comparing standardized colour samples, depending on whether they are illuminated by the considered light source, or by a reference light, such as daylight. The smaller the color difference, the higher the CRI. It ranges from 0 (no rendering) to 100 (perfect rendering).


Let’s take an example. You may have already noticed how dull some cars look under the yellowish light of tunnel lights. In fact, low-pressure sodium lights have long been used for tunnel lighnting for tunnel lighting for their excellent efficiency. They do, however, emit only in the yellow part of the visible spectrum, around 590 nm. Therefore, a blue vehicle will not be able to return any wavelength corresponding to blue, since it has not received one! It will then appear in hues of grey. So, the CRI of this type of lamps is low, because only a part of the colours is rendered. 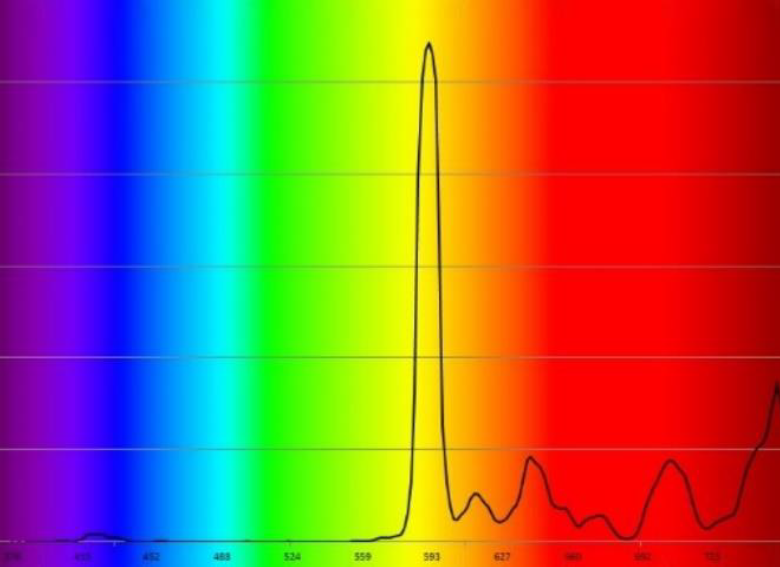 While a low CRI may be sufficient for certain application (identifying a close vehicle for instance), the fruits and vegetables department lighting must have a CRI ideally higher than 90, capable of showcasing the entire range of colours present on the stalls: enough blue to exalt blueberries, enough green to enhance Brussels sprouts, enough red to showcase strawberries.

Comparison between CRI 80 and CRI 90

For a long time, LEDs have had a bad reputation due to their poorly performing CRI, especially in reds. Recent advances of research in this field have resulted in the development of phosphors which significantly improve the CRI. Thus, some LEDs are equipped with a phosphor composed of a stack of layers capable of successively filtering and transforming the wavelengths emitted by the blue LED, so that the light finally emitted offers saturated reds. This technology is particularly used to enhance the red hues of meat, and make the minced beef more appetizing.

A better preservation of the products

Apart from a more attractive visual aspect, these techniques also have advantages in terms of preservation. Indeed, the application of specific wavelengths allows to slow down the biological processes because of wich food cannot be kept too long on a stall.

For example, potatoes exposed to daylight tend to turn green and sprout very quickly. It is preferable to store them in the dark for this reason, which is not possible in a store. More precisely, the wavelengths corresponding to blue (400 to 500 nm) and to red (600 to 700 nm) particularly activate the production of solanine and chlorophyll, two substances involved in the greening mechanism. Conversely, a lighting whose spectrum is richer in near-green wavelengths (around 550 nm) slows this process.

In addition to the germination of potatoes, other mechanisms like meat discoloration or food rancidification could be slowed down by the use of parameters such as the wavelengths used, the lighting intensity and the duration of exposure to light.

Of course, lighting makes products more attractive, but the consumer is left to wonder about the food quality. Knowing that most of the photos in the magazines are retouched, why shouldn’t the carrots be enhanced as well ? It should be noted that not all stores apply these techniques, and that sunlight is the best way of assessing the freshness of a product, regardless of the lighting chosen.

Moreover, the light properties can be used before the product arrives to the stall. Since we are able to slow down the development of potatoes, why shouldn’t we also be able to speed it up ? Research is underway, particularly among manufacturers. More and more greenhouse crops or vertical farms are now equipped with artificial lighting delivering an optimized spectrum, able to provide the plant with the most useful wavelengths for photosynthesis. As a result, both quality and yield are increased. It remains to be seen if the consumer will agree with these innovative techniques, in a context where technological progress and return to natural processes clash. What about the long-term consequences of the consumption of fruits and vegetables exposed only to artificial radiation? The future and scientific research will tell us.

6.      Shining a light on why potatoes turn green, https://ag.purdue.edu/stories/podcast/shining-a-light-on-why-potatoes-turn-green/