﻿This article is written in collaboration with the Week of the Sound.

Music has made rhythm in our lives for thousands of years. Creating emotions, stimulating memory, but also being a therapeutic tool in various pathologies, music and its effects on the brain have not finished surprising us.

We are lucky to be part of the species that loves music to the point of creating it and shaking our hindquarters when we hear it. One of the differences between us, Homo sapiens, and the brains of our ape cousins, is the increase in the area used to process auditory information, the temporal lobes (the area you massage when your temples hurt...). But that's not all, we also find in in us and other music loving mammals a development of the middle ear from the jaw bones which allows us to transmit sound frequencies from 20 Hz to 20 000Hz.  Above 20 000 Hz is ultrasound.

Before we got out the guitars and drums to jam, music came from our vocal cords:  our voice was our first instrument. This is one of the reasons why music and language development are so close and linked to each other. Scientists are now debating this link and the origin of our languages. According to some theories, they would have emerged from the protolanguage, framed by musicality and executed by a gesture and an anatomical development which are proper to us. These coordination of limbs, face, larynx and  brain have made us  fans of classical, metal or jazz, speaking different languages but united by these so stimulating sounds that represents music.

What happens When you put your headphones on to listen to your favorite music?

Sound will come out of your headphones, which is called pressure wave because the molecules of the air come closer to each other to propagate better (the sound propagates very well in a solid, slowly in water and in the air but not at all in the vacuum).

Then, the external part of our ear captures the sound signal and reflects it in our auditory canal. This compression wave containing your favorite music hits your eardrum at a right angle. At this stage we can already distinguish between different musical frequencies even if everything is the same intensity.

The path continues through the bones of the middle ear which lead the sound from the eardrum to the inner ear fluids The sound pressure has increased and will reach the famous organ, the cochlea (from the Greek meaning snail), where almost everything is played out.

Diagram of the propagation of the sound wave in an ear

The inner ear is enclosed in the hardest bone in the body.  Vibrations enter and strike a type of cell called cochlear hair cells. There are about 20,000 of these cells. A small number compared to the eye, which has millions of cells ready to pick up light signals. The slightest loss or degradation of these cells, has a big impact on hearing. The cochlear hair cells will then transform this mechanical message into an electrical message that will be sent to the brain.

This arrival of the electrical signal in the secondary auditory cortex, which is activated when listening, understanding words and musical scales. We then observe modifications in activity of amygdala, hippocampus, right central striatum, pre-supplementary motor area of the cingulate and orbitofrontal cortex. In short, a beautiful fireworks display followed by an equally explosive release of hormones. Among these hormones are dopamine (the so-called happiness hormone), serotonin, adrenaline, noradrenaline and acetylcholine. 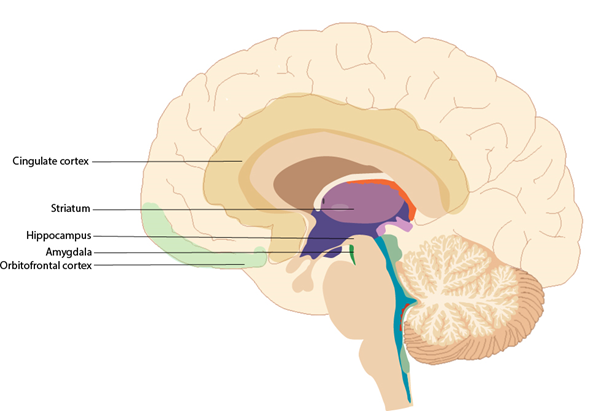 Diagram of the brain and the areas affected by music

The study of these signals has shown the crucial implication music has on our emotions, but not only them! It can improve our health and well-being thanks to these neurochemical releases, an increase in stress and excitement (again depending on the music), reinforce our immune system and social affiliations.

Music doesn't stop there as it has strong influence on brain plasticity. Recent research has looked at the benefits of music education for dyslexic and special needs children. Several things have been observed, including calmness of the children, improvement in communication for those with autism, improvement in mathematical tasks, but especially  improvement in reading and writing for dyslexic children. As for children without these type of difficulties, early musical training contributes to the perception of language.

For the elderly, music can be a tool to stimulate brain plasticity and develop new links between neurons in order to compensate for brain lesions. With age, we observe a decrease in episodic memory (which situates us in time and space). Emotions provoked by music can serve as an activator and compensate for this deficit.

Music has other therapeutic applications as well: rhythmic movement training can help patients who have had a stroke, Parkinson's disease, cerebral palsy or traumatic injuries to regain some freedom in their daily movements. An application in Alzheimer's disease is also possible. It is suggested that memory traces built by music are more deeply rooted and therefore more resistant to the disease.

The last thing many of us do, as you might have done it while reading this article and following the intertitles, is having background music on. It helps to improve cognitive skills. Simply put, when you listen to music while focusing on another task, your brain works and muscles up.

Music is all around us, and people use it in their daily lives. It fulfills social functions with the expression of identity and personality, emotional functions with the induction of positive feelings, cognitive functions such as escapism and functions related to arousal, such as calming down or passing the time.

Despite all music lovers, there are still 1.5% who are insensitive or even find it unpleasant. This is a real neurological condition called amusia.

Apart from this last category, music is full of surprises, both biological and psychological. Numerous therapies now call upon it because the potential for clinical application is important.