On January 13, Clémentine Autain, a member of the France Insoumise party, proposed to the National Assembly to recognize endometriosis as a long-term condition. After being adopted unanimously, the President has taken up this issue and asked the French Minister of Solidarity and Health, Olivier Véran, to assemble a guiding committee, which met on February 14.

This first interministerial guiding committee for the fight against endometriosis, which was held on February 14, marks the start of the national strategy to fight against this crippling condition which affects  one in ten women in France. The Ministries of Higher Education, Research and Innovation, Labor, Employment and Integration, National Education, Youth and Sports, and the Ministry of Equality between Women and Men, Diversity and Equal Opportunity met with associations of endometriosis sufferers and field workers.

Even if awareness is there, a resolution is not a decree. It is a regulatory initiative and has no binding force. It is therefore a mark of expression, a wish or a concern of the National Assembly. In this particular case, this concern has obtained the totality of the votes in the Assembly.

A push is being made to include the pathology of endometriosis in the list of ALD 30 (long-term illnesses). This would allow any affected woman 100% reimbursement by the Social Security, days of leave and an adjustment of working hours due to its affection. Currently, endometriosis is part of the ALD 31, i.e., "off-list" diseases. Recognition is not systematic and is random depending on the territory and the practitioner. It is therefore a lottery.

How does a cycle work?

Every woman with a vagina, a uterus, fallopian tubes and ovaries normally has menstrual cycles. A menstrual cycle takes place over a span of 28 days. During this period, the woman, her organs and her hormones will undergo different changes so that her body can welcome a future child at a certain time. 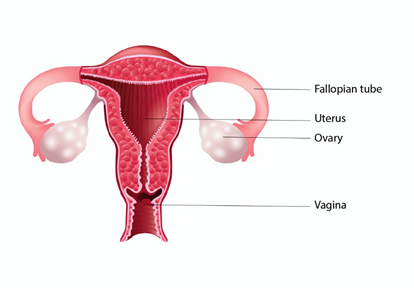 Every month, at the beginning of a cycle, oocytes are contained in follicles and are ready to be expelled. During the first 14 days of the cycle, their size increases until one of them stands out. An oocyte is then expelled on the 14th day by one of the two ovaries. Once it reaches the auricle of the tube, it becomes an ovum. At the same time, another organ changes its appearance: the uterus. During the first 5 days, its mucous membrane which covers the inside will degenerate and be destroyed, known as menstruation. Afterwards it will rebuild and thicken its endometrial wall. After ovulation, the uterus still changes aspect, and the uterine lace appears. It is under these conditions that an embryo can nestle and develop.

This synchronization of the uterus and the ovaries is linked to the secretion of hormones from the ovaries. The concentration of hormones varies according to the period of the cycle. These hormones include estrogen and progesterone. At the beginning of the cycle, their concentration is low, so the period can start. An increase in estrogen will then help regenerate the lining of the uterus. After ovulation on day 14, progesterone takes over.

Endometriosis, a condition that affects  6-10% of women.

Endometriosis is a gynecological condition that is still poorly known, yet common, affecting women of childbearing age. The formation of endometrial tissue occurs in places where it should not be present. Endometrial cells line the lining of the uterus and develop to accommodate an embryo. 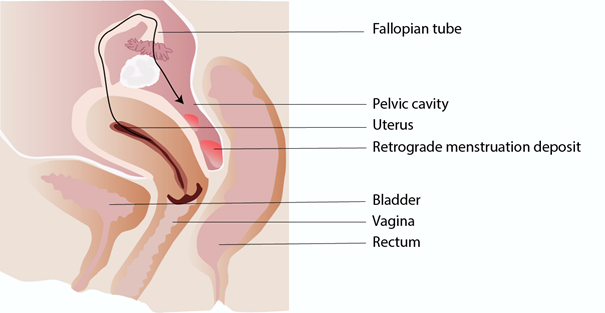 In some cases, these cells can also be found in different areas of the body such as the vagina, rectum and sometimes even the liver, lungs and brain. These cells, once attached to the organs, will create lesions and react to the hormone plays during the menstrual cycle. They will bleed, which can cause severe pain during and outside of the menstrual period (dysmenorrhea). A strong fatigue can also be felt. For some women, there is pain during urination (dysuria) and defecation (dyschesia), as well as during sexual intercourse (dyspareunia).

If any of the signs are present, it might be a good time for a gynecological exam. This should be done by a professional, as the symptoms may vary drastically in both severity and volume, with 5-10% of the affected women not having symptoms at all.

- Deep infiltrating endometriosis: unlike the previous case, there is no real influence on the menstrual cycle. “Pieces" of endometrium can be found in areas at the back of the uterus and vagina such as the rectal area.

The dominant hypothesis of the causes of this condition is implantation. As explained above, this would involve endometrial cells migrating in the wrong direction, up the tubes and lodging in different organs, but it is unlikely that this is the only explanation.

The direct consequence of endometriosis, other than pain, is infertilityThe most common diagnosis is, in fact, during a medical exam prior to having a child.

Routinely and as a first step, affected women are detected through palpation by a doctor or midwife. A pelvic ultrasound or even an MRI (magnetic resonance imaging) is often used afterwards.  In order to confirm the diagnosis of the condition, it is necessary to take a tissue sample for a histological sampling (observation and study of tissue). This is done during a surgery called laparoscopy. It allows both to confirm the presence of the condition but also to classify it on the ASRM scale and to treat apparent lesions to relieve pain.

In the case of endometriosis, scientists are inclined to believe that endocrine disruptors play a role in the progression of the condition, but also in its onset. Another element could come into play: epigenetics. For readers who are not familiar with this notion, I invite you to read our article "Our impact on our genes". Basically, epigenetics illustrates the capacity of our environment to influence the expression of our genes.

These two risk factors are still not fully identified as being responsible, but several researchers are taking a strong interest in them.

Where do we stand today?

there are two types of treatment for women with endometriosis available at the moment. First and the most commonly used is medication, which most often involves taking oral contraceptives and progestin to stop menstruation and reduce pain. However, few women seem to be able to tolerate this option because of the heavy side effects such as an increase in hair growth, strong mood swings, drop in libido, etc. This method is used to obtain long-term effects, but is not compatible with a desire to have children.

Immunotherapy is also being studied. This would consist of targeting a type of our immune cells, the T lymphocytes (see Anne Clerico's article, Immune system GI’s in action).

Another avenue is diet, which has been reported to have beneficial effects. Here again, concrete studies are lacking, but this does not detract from the interest that researchers have in our microbiota in relation to endometriosis.

The last solution is surgery, which is applied in the desire to procreate but also to reduce the pain.

After reading this article it is important to understand that endometriosis remains a condition that is neither understood nor properly managed. There are methods to relieve women suffering from it, but nothing that will allow them to be completely cured. It is therefore important to communicate and discuss about it, both to avoid having women who, because of their wandering and misunderstanding of the medical profession, do not feel "legitimately ill", but also in order to involve and value the world of research working to find solutions.

A rapid detection test launched by a startup

Many patients find themselves in total confusion before knowing if they have this condition or not. A startup specialized in artificial intelligence and collaborating with many hospitals is currently waiting for the green light for the reimbursement of its test before marketing. The concept is simple: it is enough to collect saliva and send the samples to the laboratory in order to detect what are called biomarkers. These are molecules (proteins, enzymes, hormones) that can identify this condition. At last, there is hope for an answer for women waiting for a reliable diagnosis.