Episodic memory is a form of conscious, explicit memory of lived moments and their context, that also allows us to plan the future. This memory is sometimes also called autobiographical, as it is the one that knows you the best! This form of memory is especially affected by diseases such as Alzheimer's disease, post-traumatic stress disorder, schizophrenia, and many others.

Why do we remember?

Because it's a matter of survival! Your memory is there to guide you so that your behavior is adapted to your environment, maximizing safety and effectiveness. It can be remembering the layout of the supermarket to avoid spending 30 minutes looking for pasta. Or to avoid danger: remember the day when, as a child, you put your hand on the electric hot plate and you burned yourself. It happened once and won’t happen again! Moreover, your memory is also the trace of your experiences and interactions with people and therefore participates in constructing your personality.

One episode a day

Episodic memory is all about learning, storing, and remembering particular events: from your little brother who grossly cheated during an epic game of Monopoly in July ‘95 to that great concert with friends last weekend. All thanks to the hippocampus of course! The hippocampus is the core cerebral structure of episodic memory. Neurons that compose it assemble all the information related to an event within a single neuronal network. Let’s go back to the example of the concert. Hippocampal neurons encode spatial (the concert hall X), temporal (the weekend of March 19), and contextual (the concert of Y, with your friends A, B, C, and D) information. Thus, each memory formed is stored within the hippocampus and leaves a “trace” which corresponds to the biophysical and biochemical modifications undergone by the neuronal network associated with that specific event, the concert in this example. These modifications correspond to changes at the cellular level (a neuron whose structure will evolve) and at the molecular level (certain molecules contained in this neuron will also be affected). The hippocampus acts like a super-library that assembles each moment of your life in a book, itself neatly stored on a shelf in your memory, available, and ready to be reopened as soon as you need to recall your memories. In cognitive sciences and neurobiology, this memory-specific network is called an engram. 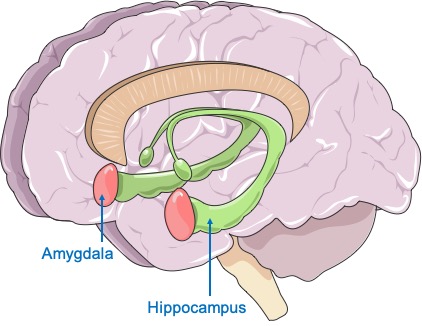 Schematic view of the hippocampus in the human brain. The hippocampi are present in both cerebral hemispheres, in the temporal lobes more precisely. Source: Servier Creative Art.

The concept of engram and the different stages of memory

The term engram was proposed by the German scientist Richard Semon in 1904 to name the biological substrate supporting acquisition, storage, and recall of memory. The engram phenomenon is well studied in the hippocampus (but also in other brain regions such as the amygdala or the prefrontal cortex). Once formed (acquisition phase), the engram is anchored (consolidation phase) and enters a non-active state. This engram is reactivated when one remembers (recall phase). Let’s go back to the example of the concert. First of all, once the elements of this concert are stored in an engram, they will be consolidated. Eventually, a few weeks later during a conversation, the mention of the concert hall name will reactivate the neurons which were in charge of storing the spatial information of this concert. The activation of a fraction of the neurons composing the engram will allow its reactivation as a whole. It can even be updated if new related elements appear (for example, one of your friends mentions a little improvisation by one of the musicians that you did not remember initially, but which comes back to you and which you will remember from now on). The engram linked to the memory of the concert is first reconsolidated and returns to a non-active state…until the next time.

According to the concept developed by Semon, there are four characteristics of the engram: persistence (biological changes induced by the acquisition of information last over time), ecphory (the activation of an engram can lead to a behavioral response through the presentation of event-related cues), content (the information acquired is reflected by what the engram contains and accurately predicts what can be recalled), and dormancy (corresponding to a non-active state between acquisition and recall). It is amazing to see how accurate Semon's predictions are although knowledge of the brain’s biology was at the time incomplete.

Scheme of the different stages of episodic memory. Each memory is stored in its neuronal network, called engram, in which the neurons show specific activity. This network oscillates between an active state during acquisition and recall phases and a non-active state during consolidation/reconsolidation phases (scheme inspired by Josselyn et al., 2015).

Donald Hebb and the foundational principle of memory

How is the neural network associated with an event formed? “Neurons that fire together, wire together”. This phrase from Donald Hebb, a Canadian neuropsychologist, in 1949 is perhaps one of the most famous in neuroscience, quite simply because it sums up a fundamental idea: neurons activated simultaneously by the same stimulus (the concert) preferentially form connections together (and therefore an engram of the concert). In the future, the activation of a subgroup of neurons of this engram (corresponding to a song of the concert) allows the activation of the whole neuronal network thanks to the reinforcement of their connections. This is how the full memory is reactivated, allowing us to remember it in its entirety. According to this principle, the neurons which have reinforced their common connections harmonize their activity, thus forming a code, characteristic of the acquired event. The neurons which, at the time of acquisition, are the most easily activatable (i.e. “excitable”) are chosen to be part of the engram, and this is how each memory is associated with a specific network of neurons, through a process named memory allocation.

Recent technological advances such as optogenetics have made great strides in understanding memory. This technique, which can activate or inhibit a well-defined group of neurons, has thus validated the existence of the engram and made it possible to better understand its biological bases, but also to open the way to a better understanding of the pathological forms of memory. Stress, aging, and sleep, among others, are known for their effects on memory. Thus, the progress made to elucidate the biological bases of memory is currently guiding researchers in their work to understand its pathological forms and how internal or external factors influence our memory capacities.