Blood donation is nowadays a common practice around the world. It is mostly done by unpaid volunteers who donate blood for a community supply, donating for various reasons: as a form of charity, general awareness for others in need, helping a friend or a relative, and sometimes for paid time off work. Regardless of the cause, blood donations are still insufficient to cover the increasing need of public hospitals.

The practice of blood transfusion began in later years of the World War II, when Charles Richard Drew, an American surgeon developed improved techniques for blood storage and large-scale blood banks which saved thousands of lives of the Allied forces. Today, hospital complexes, or even city-wide networks of hospitals rely on blood donations to supply the surgery rooms.

Donating a part of yourself

Although mildly uncomfortable, the process of blood donation is mostly painless, apart from the needle sting at the beginning. The donor fills out a form stating their mental and physical health, together with their relevant history covering health and high-risk behaviour, such as current and recent medications, chronic infections, history of prolonged bleeding, previous blood transfusions, and other. A preliminary physical check-up is conducted as well, including blood pressure, coagulation rate and eritrocyte density, together with written consent (and in recent times COVID-19 questionnaire). Immediately before the procedure, the donor is identified again to ensure labeling on the test tubes and the blood bags are correct and that all match the donor's information. The skin is disinfected and the needle inserted into a large vein, preferably in the antecubital fossa (the inside of the elbow joint). Large diameter of the needle allows for uninterrupted blood flow to the blood bag, coated with anticoagulants to ensure the blood's longevity. Together with the main container, additional test tubes might also be filled with donor's blood for further testing.

As in case of every blood loss, the donor is monitored for sweating, palor, anxiety, development of haematoma at the injection site, fainting, or changes in blood flow. As blood contains the liquid and the cellular component, most of the side effects can be mitigated by offering the donor liquids, especially those richer in glucose. The designated volume of blood donated (up to 470 mL) will easily be replaced by water, in terms of volume, in the upcoming hours. The nutrients, such as glucose, sodium, calcium and others, otherwise known as plasma will be replaced within several days, and the cellular component in upcoming weeks, on average after 36 days. Keeping this in mind, the donor can notice shortness of breath, less muscle power, faster tiring and similar side effects in the first several days after donation, corresponding with blood „restocking“.

Prior to any transfusion, blood needs to be tested to ensure its safety in terms of bacteria and viruses, and several prominent and problematic conditions. One of the most important tests determines the blood type to see whether it is type A, B, AB or 0, plus its Rh factor.

A blood type (also known as a blood group) is a classification of blood, based on the presence and absence of antibodies and inherited antigenic substances on the surface of red blood cells. Some of these antigens are also present on the surface of other types of cells of various tissues. Blood types are inherited and represent contributions from both parents. As of 2019, a total of 41 human blood group systems are recognized by the International Society of Blood Transfusion. The two most important blood group systems are ABO and Rh; they determine someone's blood type (A, B, AB, and O, with +, − or null denoting Rh status) for suitability in blood transfusion. The blood group A has only antigen A on their red blood cells, while B has only antigen B. AB has both, while 0 has neither. Any of them can also be positive or negative for Rhesus factor (Rh), specifically Rh antigen D, the most immunogenic of the Rhesus family factors. The presence or absence of the Rh(D) antigen is signified by the + or − sign, so that, for example, the A− group is ABO type A and does not have the Rh (D) antigen. 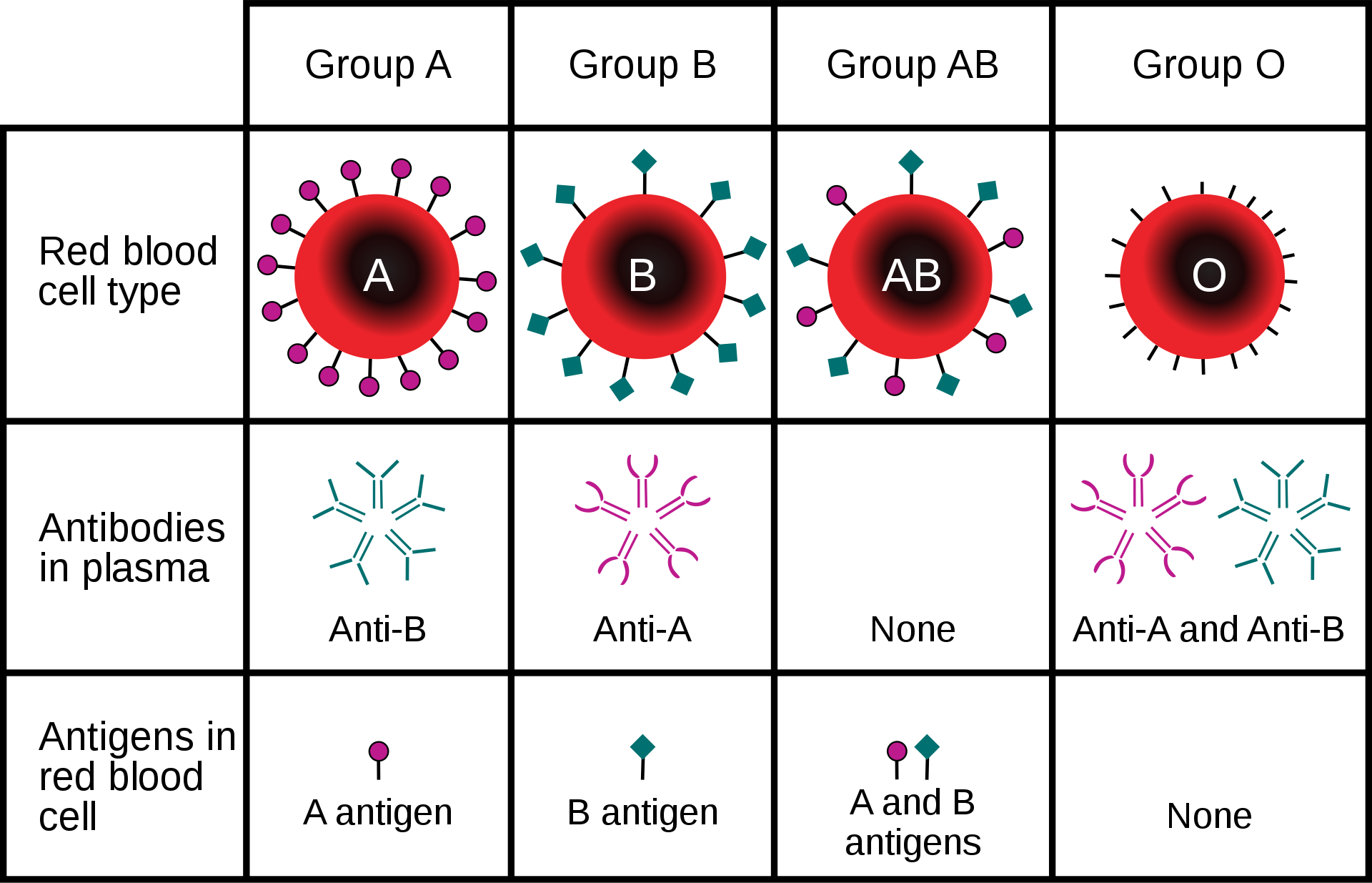 Figure 1: different blood groups and their characteristics in terms of red blood cells and plasma

Much of the routine work of a blood bank involves testing blood from both donors and recipients to ensure that every individual recipient is given blood that is compatible and is as safe as possible. If a unit of incompatible blood is transfused between a donor and recipient, a severe acute hemolytic reaction with hemolysis (RBC - red blood cell destruction), kidney failure and shock is likely to occur, and death is a possibility. Antibodies can be highly active and can attack RBCs and bind components of the complement system to cause massive hemolysis of the transfused blood.

Due to having no surface antigens, blood type 0- is considered the universal donor, and the AB+ the universal receptor. This means that, due to their antigen makeup, AB+ can be donated exclusively to other people with AB+ blood group, while 0- can be donated to any person in need. 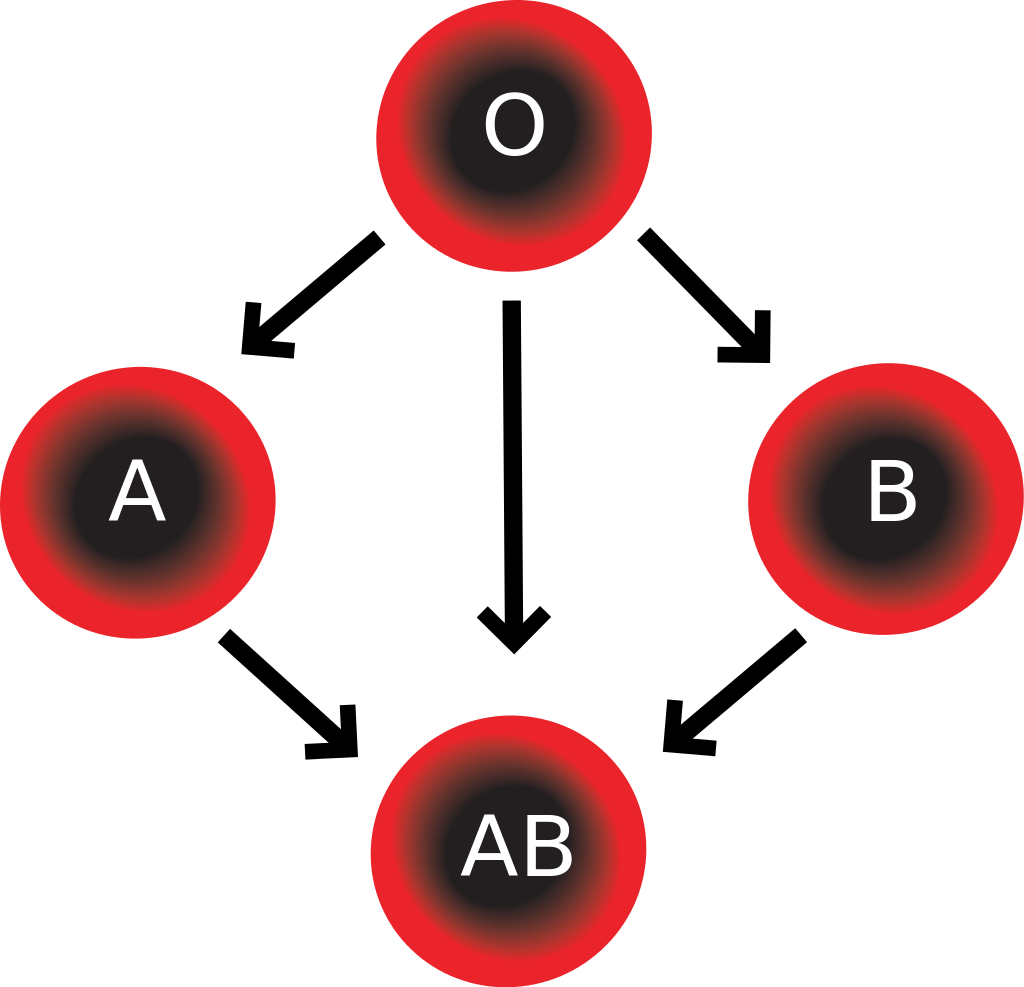 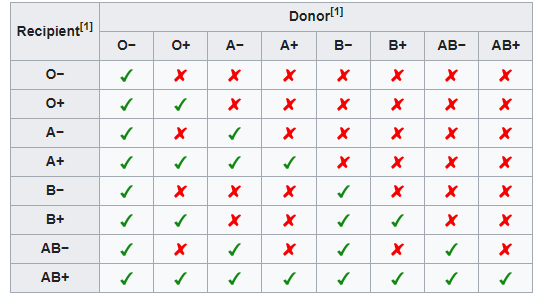 To provide maximum benefit from each blood donation and to extend shelf-life, blood banks fractionate some whole blood into several products. The most common of these products are packed RBCs, plasma, platelets, cryoprecipitate, and fresh frozen plasma (FFP). FFP is quick-frozen to retain the labile clotting factors V and VIII, which are usually administered to patients who have a potentially fatal clotting problem caused by a condition such as advanced liver disease, overdose of anticoagulant, or disseminated intravascular coagulation.

As need for universally accepted blood product rises, scientists are trying to come up with new ways of increasing efficiency of donated blood. In April 2007, an international team of researchers found an inexpensive and efficient way to convert types A, B, and AB blood into type O. This is done by using enzymes found in specific bacteria to strip the blood group antigens from red blood cells. The removal of A and B antigens still does not address the problem of the Rh blood group antigen on the blood cells of Rh positive individuals, and so blood from Rh negative donors must be used. The sort of blood is named "enzyme converted to O" (ECO) blood.

During the 1930s, but persistent to present day, connecting blood groups to personality types became popular in Japan and other areas of the world. Studies of this association have yet to confirm its existence definitively. Other popular but unsupported ideas include the use of a blood type diet, claims that group A causes severe hangovers, group O is associated with perfect teeth, and those with blood group A2 have the highest IQs. Scientific evidence in support of these concepts is limited at best.

With more and more awareness about lacking supplies of donated blood, a positive trend in number of donations has been established in the last decade. Unfortunately, these numbers are still severely lacking, as blood donors number only 3.7% in the US, 4% in Sweden, and 3.5% in the UK. Donating blood is mostly painless, with little to no downside, and can directly be responsible for saving another's life. As the WHO's 2010 campaign motto says: every donor is a hero!

7.    "Revised Recommendations for Reducing the Risk of Human Immunodeficiency Virus Transmission by Blood and Blood Products - Questions and Answers". US Food and Drug Administration. Archived from the original on 2016-03-30. Retrieved 2016-03-30.

The power of olfactory memory

Our imitation of the living

Homeopathy, a controversial practice Homeopathy has its supporters and detractors.