Back in the Roman Empire, immunists were great landlords who had the power to form an army and do their own justice without needing the agreement of local administrations. Immunity, from latin immunis, can be translated as « exempt » which relates to the idea of privilege. From that point of view, immunology could be the science of our “army” against diseases whereas immunity would be the medical term applied for the privilege of not being sick.

Immunology can be defined by the study of the immune system. The latter is a group of cells, tissues and molecules that work together in order to act against a foreign threat that could lead to infections or diseases. They are two types of immunity. On one hand, innate immunity, the equivalent of the infantry, formed by cells that identify danger and share the intel collected with the others (dendritic cells), and cells who will destroy the intruder by releasing toxic molecules and digesting him (granulocytes and macrophages). Innate immunity is called unspecific for it answers as soon as there is an attack. It is the first line of defense against our swear enemies, pathogens, as the definition for them is anything that could start a disease. On the other hand, adaptive immunity, is the cavalry which takes place a bit later. Its response is specific to an intruder and the cells will memorize the enemy’s identity so as to be faster the next attack. We distinguish two sub-groups within the adaptive immunity. The humoral immunity which is led by B cells (LB) to produce antibodies. The cellular immunity organized by several members of T cells (LT) community. 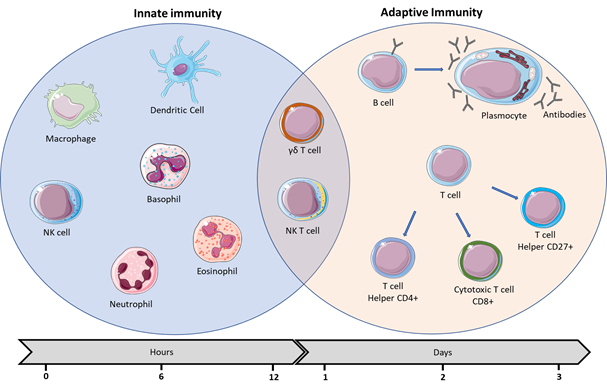 Pathogen identification is different for each immunity. For Innate immunity, it is founded on recognition of particular patterns, pathogen associated molecular patterns. Those are the banner of the enemy, the pathogen’s features, and are fragments of sugar or DNA connected to a particular bacteria or virus. Innate immunity cells can also detect damage associated with molecular patterns. When a cell is in a rough state, some proteins which are normally within the cell are exposed around in the environment and are associated as alarm signals. Those small molecules are then recognized by receptors, much like locks and keys. This joining, just as a soldier ringing an alarm bell, will trigger a signal inside the cell. Specific structures will start forming (inflammasome, proteasome and phagosome) and can be related to intelligence centres and prisons. All these events will finally lead to an inflammatory response, a stimulation of innate immunity as well as the enlisting and production of soldiers. The cavalry (adaptive immunity) will be mobilized by means of messengers, the cytokines. The latter are small functional signalization proteins who will coordinate the immune cells interactions in the cellular environment. 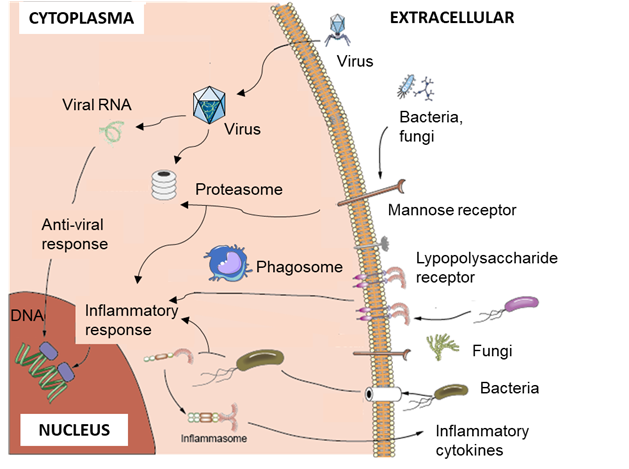 Concerning adaptive immunity, pathogens recognition takes place in secondary lymphoid organs through antigen receptors (locks) localized on our cavalrymen, T and B cells. Secondary lymphoid organs are the equivalent of the army’s headquarters. They are particular zones where immune cells gather together to share information. B cells will connect directly to an antigen and will be transformed in plasmocytes in the purpose of synthesizing specific antibodies against the antigen. Antibodies are the same as yellow stickers stuck on our enemy and screaming to the world it must be killed. The pathogen, covered with antibodies, will be addressed to our infantry’s Spartacus, macrophages. They will literally destroy it in one bite, since they will phagocytize (more or less gulp), digest and annihilate the intruder. However, T cells, who are more of a strategic mindset, will need to have the antigen presented to them through an intermediate called antigen presenting cells (APC: mainly dendritic cells but sometimes macrophages and LB). Those APC have a determinant role as they share information for identifying the enemy to adaptive immune cells. There are several events that should occurred for lymphocytes to be activated. First of all, the immunological synapse. It can be represented as a handshake between the cavalry and an infantry colonel just before an intel meeting. This physical connection is done between MHC protein (Major Histocompatibility Complex) and the T cell receptor (TCR). Secondly, costimulation proteins will gather near the synapse to reinforce the interaction. Finally, the last signal allowing the cell activation will be our little messengers, cytokines, which will be released around the cells. Only then the cavalry will be able to act and to take arms in the purpose of destroying our opponent and establishing an immune memory so as to act faster face to another attack. 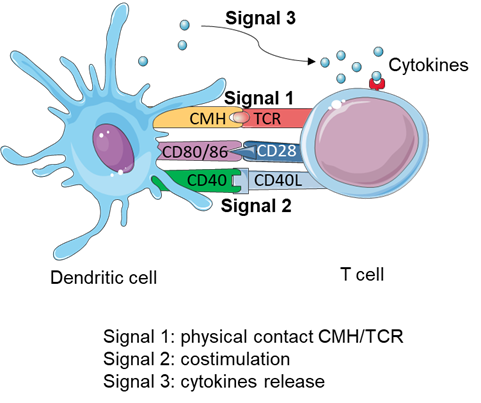 Figure 3: The immunological synapse between APC and LT (Source: Adapted from Kapsenberg, 2003)

Once the immune response is launched, the immune cells will work together to destroy the pathogen. Immune cells will phagocytose and release molecules (perforin, granzyme) to bombard the enemy and to puncture its membrane and annihilate him. However, those defense systems could be dangerous if let unattended for a long period of time. It is a necessity to stop the immune response to avoid tissular damages such as necrosis or weakening of cells foundation. Several mechanisms are going to take place to reign in our soldiers. Let us begin with regulator T cells (Treg) whose purpose is to regulate the immune response. They provide a tolerance for our own antigens with the aim of avoiding autoimmune diseases. They are both mediator and actor, just so would be a sergeant. Furthermore, receptor internalization mechanisms will occur within the cells, so as our G.I. will not be able to answer to the messengers. Apoptotic or stagnant cells will be digested by macrophages or simple stay inactive within the cell environment. Those mechanisms act like safeguard to avoid the immune system uproar.

Immune mechanisms are complex, and many immune cells are still discovered nowadays. Establishment and resolution of the immune response are well known and have been studied in from and through. Innate and adaptive immunity bring an immunitary defense and protection against pathogens. However, this system is not without flaw since autoimmune disease exists and conducts our own soldiers to attack ourselves. Finally, some cancer cells and viruses can escape our vigilance thanks to mutations which give rise to a lack of acknowledgement of danger.

Childhood obesity, a scourge to fight