Polycystic ovary syndrome is the leading cause of infertility in women of childbearing age. And it currently affects one woman in ten. This pathology, which is still poorly diagnosed, condemns many women to medical wandering.

The term PCOS, or Stein and Leventhal syndrome, was named after the two gynecologists who described the syndrome in the 1830s. The diagnosis was based on the observation of what appeared to be cysts in the ovaries. However, they were a multitude of large follicles clumping together. Normally, women have several follicles at different stages of development, but not a rapidly growing cluster without expulsion.

PCOS is a syndrome related to endocrine dysfunction which means there is a problem with hormone regulation. It is also a so-called multifactorial pathology, which means that it is linked to genetic, environmental and epigenetic factors.

To talk about PCOS, it is first necessary to remember how the menstrual cycle works. A woman's cycle lasts about 30 days. The first day is counted as the day of menstruation. Until the 14th day, it is called the pre-ovulatory period, after which a mature follicle is expelled from one of the ovaries. This becomes an oocyte, and is called ovulation, after which comes the post-ovulatory period lasting until the next cycle. An oocyte survives from 12 to 24 hours. We only speak of an egg when it is fertilized with a spermatozoon. 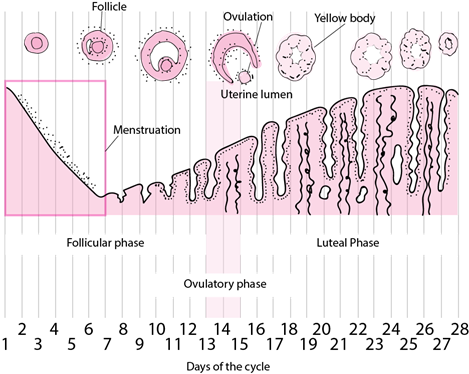 Diagram of the female cycle

We said earlier that PCOS was related to hormonal problems. So what are the roles of hormones in this cycle? Under normal conditions, the hypothalamus, a part of our brain, secretes a hormone called GnRH (Gonadotropin-Releasing Hormone). This one will then act on the pituitary gland (just below, similar to small grapes), which in its turn will secrete two types of hormones. The LH (luteinizing hormone) allows the production of progesterone in order to prepare the body for pregnancy and is also responsible for the regulation of testosterone. FSH (follicle-stimulating hormone), on the other hand, allows the release of an oocyte. 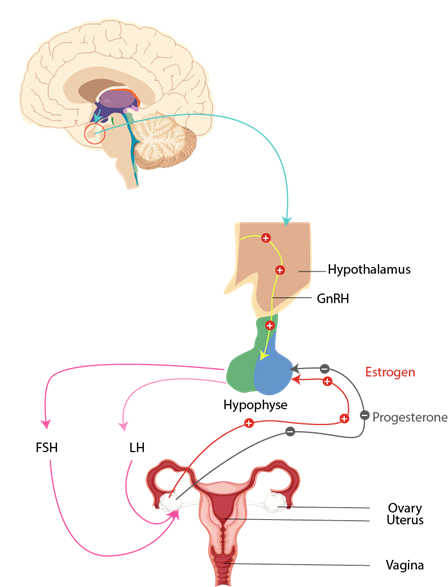 Diagram of the course of the hormonal message in women 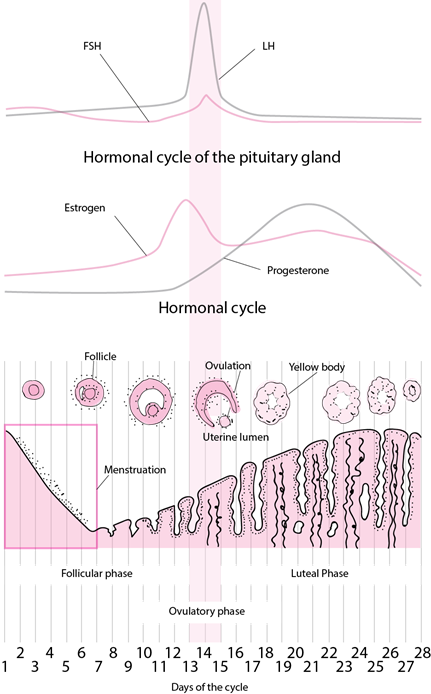 Diagram of the female hormonal cycle

What happens in PCOS?

In PCOS, the maturation of follicles in the ovaries is blocked by excess androgen hormones, including testosterone. The follicles remain immature and accumulate causing an inversion of the relationship between FSH and LH with a high level of androgenic hormones and hyperinsulinemia. This is an overproduction of insulin, which in the long run can cause resistance to it and prevent its use by the body. If you eat too much chocolate in such condition, you can overdose on sugar.

Other symptoms are related to this hormonal imbalance. They are not found in the same way or to the same degree in all PCOS patients. 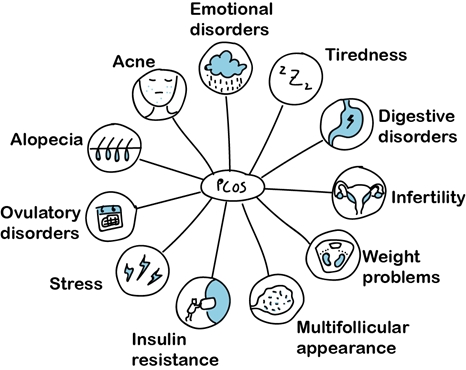 Illustration of PCOS symptoms (from the book Living Well with PCOS Naturally, by Hannah Livage)

In the long term, this pathology can increase the risk of various syndromes such as overweight, high blood pressure, blood sugar disorders, increased risk of developing cardiovascular disease and endometrial cancer.

The origin of PCOS

A question that imposes is: what can cause so many symptoms? One part of th answer is the genetic factor. Researchers have not found any specific genes for PCOS, however, according to some studies, more than 20 genes have been identified that can be found in PCOS patients. But there are no "special PCOS genes" to speak of. Conversely, the syndrome is transmitted from mother to daughter in 60 to 70% which makes it s a hereditary pathology.

Another genetic parameter to be considered according to the researchers is epigenetics (see Our impact on our genes). It is the activation or deactivation of genes according to different parameters (diet, age, lifestyle). Epigenetics, unlike genetic alterations is reversible and is transmitted from generation to generation.

Finally, there is the environment. In this pathology, endocrine disruptors are certain to be a major factor. However, no study has yet been able to support this hypothesis in a precise manner.

What is the status of research?

PCOS is a syndrome related to hormonal abnormalities, and is diagnosed by hormonal monitoring, ultrasound to visualize the multifollicular aspect of the ovaries, but also by observing physical characteristics related to the symptoms (hirsutism, obesity, acne, etc.).

Several treatments are currently available to alleviate them. These include medical treatments such as certain contraceptive pills to "rebalance" the hormonal balance. There are also molecules to counter the high level of androgenic hormones (cyproterone acetate). Weight loss and a balanced lifestyle and diet are also recommended to reduce symptoms and insulin resistance.

In the case of a desire for pregnancy, there are several methods based on the stimulation of ovulation by clomiphene citrate. MAP (medically assisted reproduction) prior to surgery can be considered.

Publications on PCOS are recent and still few in number. However, there has been a slight evolution in the identification of symptoms and a strong recommendation by researchers to use caregivers from different specialties to establish the diagnosis (midwife, nurse, physician and pharmacist).

Currently, studies are being carried out on animal models (mice), which have made it possible to observe a link between the overproduction of a hormone, AMH (antimüllerian hormone), in the mother during pregnancy, which would subsequently prevent the conversion of testosterone into estradiol in the child.