There is a bright yellow organism living in the undergrowth of lush forests, spreading its apendages like a spider's web around tree trunks, moss and foliage. It is called the blob.

First discovered at the end of the 19th century, the blob has intrigued the world of science for several decades. It is neither an animal, nor a plant, nor a mushroom. It is quite difficult to imagine such a living being capable of some form of intelligence, not being a part of the living kingdoms as we know.

How to take care of a blob

"Blob" is the nickname given to Physarum polycephalum from the 1958 film The Blob. The general public is accustomed to the three major kingdoms of the living world: animals, plants and fungi. However, there are many others, such as bacteria, parasites and mycetozoa. The Physarum polycephalum belongs to the latter.

The blob consists of a single giant cell with several nuclei that can stretch and double its size in just one day. The myxomycete moves in 'waves' by propelling its body forward, and the rear will eventually retract as it moves.

The optimum temperature for its development is 24°C in a humid environment, away from light. Undergrowth is ideal, but it is afraid of mold. 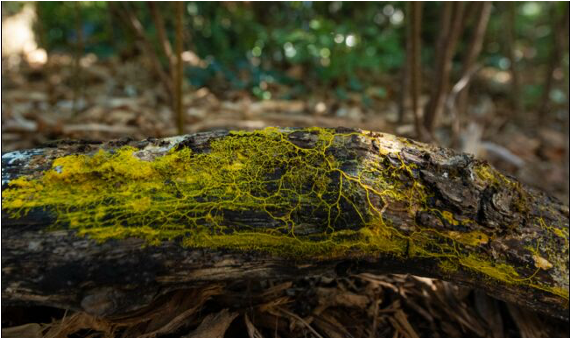 Photo of a blob in the undergrowth

The blob is a great gourmand. It is always on the lookout for sweet and protein-rich foods. Its favourite food is oatmeal, but in the wild it feeds mainly on small mushrooms and bacteria.

When its environment is not optimal,   either due to lack of food or too cool temperatures, the blob is able to go into sclerotia. This is a form of stasis where it is as "asleep". In this state it can survive for up to 2 years. However, in the laboratory, stored at -80°C, the blob can be kept for 30 years! In fact, it is very difficult to kill a blob as it is considered to be immortal. 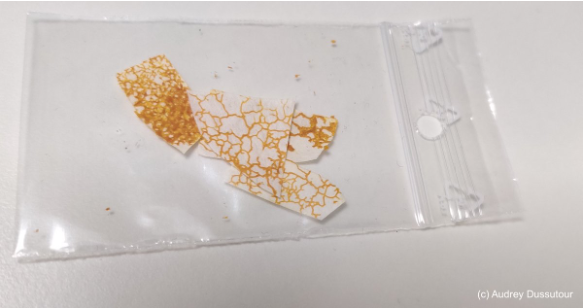 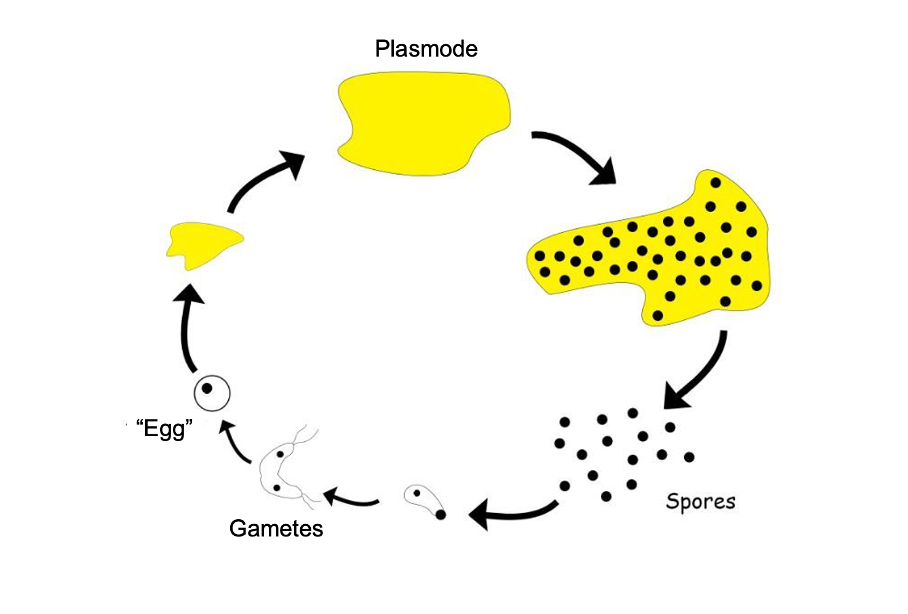 Diagram of blob reproduction. Spores are released when the blobs are of an optimal size. When two spores meet, they have a 719 out of 720 chances of falling on a spore of the opposite sex, fusing and forming a new individual.

In the year 2000, the Blob has been proven intelligent. It was able to connect two food spots located at the opposite sides of a maze in the shortest path after just several trials. This is the first demonstration of "intelligence" on its part. Scientists have created a maze to test it. They put food at both ends before inserting a blob. It was able to connect the two food spots by the shortest path after a few tries. This proves that it has the ability to learn and memorize information in order to use it for the future. 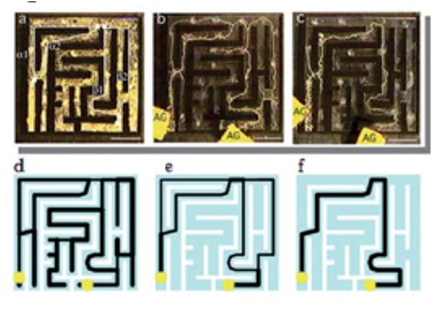 Blobs are found all over the world. There are different strains found in the United States, Japan and Australia. Depending on their origin, blobs will not explore their environment in the same way, they will not understand the choice of food in the same way, and they will behave differently towards their fellow creatures.

Australians move slowly and in all directions. They are also very slow to make a decision about food, but they never make a mistake. They value quality over speed. Americans are faster and only move in one direction. They are also very quick to make a decision, which often turns out to be right. The Japanese are just as fast as the Americans and move in all directions. However, they go to the nearest food source regardless of quality, so as not to leave food for competitors. As a result, they make mistakes more often.

The beginning of the reign

In 2010, it was shown that the blob is able to make trade-offs between risk and food. If the risk is too great, the blob prefers to abandon the food source.

It is also able to sense the stress of its fellow blobs. In one experiment, two blobs were placed in their environment. The first blob was subjected to a particular stress such as exposure to light, exposure to a toxic product or deprivation of food. The environments of the blobs were then placed in front of a third blob. The latter chose to go to the environment of the blob that had not undergone any stress.

Another example of its intelligence, after its sleep, once out of sclerotia, the blob remembers its environment. It is able to memorize and transmit its knowledge to its fellow creatures by merging with them.

It’s up to you to conduct reaserch

The CNRS (Centre National de Recherche Scientifique) has launched a major research campaign, led by Audrey Dussutour. This is a nationwide experiment to collect as much data as possible on the myxomycete and to introduce the scientific process to the public in a fun way. The aim is that each household registered for this experiment will receive a blob to "raise" at home in order to study the impact of climate change on it. The experimenters will have to raise the blobs at different temperatures, measure their growth and change their behavior. All the protocols and results will be available on the CNRS website "The blob and the scientific approach".

In this article, we have only touched on the existence of the blob, trying to retrace the major discoveries about it that have certainly left their mark on history (or at least its own). But new ones are made every year. Don't hesitate to visit the CNRS website to follow them or to learn more about those seen here!

2)   E. B. Ridgway. Control of chemotaxis in Physarum polycephalum. The Journal of Cell Biology. 1976.

7)   Audrey Dussutour. Stress signalling in acellular slime moulds and its detection by conspecifics. Philosophical transaction of The Royal Society. 2020.