If the mechanisms of learning are widely studied, those of forgetting remain much more mysterious. Yet, recent research suggests that treatments that promote forgetting may be beneficial in healing traumatic memories, as seen in post-traumatic stress disorder.

No good memories without forgetting

Even though memory is essential, we don't remember everything! The role of forgetting is poorly understood, and several hypotheses exist about its usefulness. The first, and perhaps the most intuitive, is to avoid brain saturation. It is easy to imagine that our brain sorts our memories, and eliminates the less useful ones. However, theoretical studies believe that there is no real limit to the capacity of our brain. The second hypothesis is that of behavioral flexibility. We would gradually forget the memories that are no longer able to correctly guide our behavior in an environment and replace them with new, more appropriate learning. For example, you live in a big city and drive daily to work. One day, you move across town. Gradually, you forget the exact route you were taking before and replace it in your memory with the new home-to-work route. The last hypothesis is based on a generalization of memory, a process of using the memory of a particular event in a similar, but not identical, context. Remember, a few years ago, somewhere in the Mediterranean Sea. You bathed peacefully, before seeing a swarm of jellyfish... and got stung! Now, this summer you take a swim in another location, far from that place, and another swarm of jellyfish comes. Thanks to memory generalization, your brain that has associated jellyfish with stings will tell you that it's time to get back to tanning! Thus, your brain keeps the most important (jellyfish stings are painful) and erases the details (the weather that day, the time of day, etc.) so that your memory of jellyfish leads you to adopt good behavior (here, distancing yourself), regardless of the context of this meeting.

Over time, our brain keeps in memory an overall image of events erasing certain details, deleting what is no longer suitable, or updating certain memories leading to the forgetting of elements that are no longer useful. The more your environment evolves, the more forgetting would be favored. Indeed, in a stable context, the memories formed have a strong chance of guiding or predicting correct behaviors, and therefore of being preserved. Forgetting is, therefore, learning!

How does our brain sort it out?

First, a little reminder, as explained previously (episodic memory) each memory is stored in its neural network, and the reactivation of this network makes it possible to remember. One of the first questions is then whether forgetting is due to the disappearance of the neural network storing a memory, or to the inability to reactivate this network. Studies carried out show that in a vast majority of cases, the neural network associated with memory has not disappeared, rather, it is just inaccessible. This, therefore, implies that forgetting is not permanent but reversible. In this case, what biological mechanisms make certain memories inaccessible?

To communicate, neurons form contact points called synapses between each other, allowing the passage of a message from one neuron to another and thus activating an entire network. After learning, the synapses of a network are strengthened, resulting in more effective communication. Since each neuron is responsible for storing certain details of an event, the loss or destabilization of synapses leads to the forgetting of some parts of a given memory. Several biological processes control these connections. At the molecular level, after learning, the number of AMPA receptors (which allow a neuron to receive a signal sent by another) increases at the synapse. Studies have shown that after learning, forcing the maintenance of these AMPA receptors at the synapse blocks the natural forgetting of events observed over time. Other processes will instead target the elimination or destabilization of the synapse. The activation of the RAC1 and Cdc42 proteins (which participate in the physical maintenance of synapses) leads to a destabilization of the synapses, which can no longer maintain their shape and thus weakens their connections with the partner neurons. We also know that microglia, immune cells present in the brain, are capable of suppressing certain synapses formed after learning. Research has also shown that by modulating the intensity of these molecular mechanisms, it is possible to influence the ability to remember.

At the cellular level, we also know that after learning, inhibitory neurons, called interneurons, modify their activity and control the activation of neural networks. Researchers believe that if a memory is not retrieved frequently after learning, inhibition by interneurons would increase over time, making information from inhibited networks even more difficult to recall. The final phenomenon suspected of influencing forgetting is neurogenesis. Within the hippocampus, the central structure of episodic memory, new neurons are constantly being created. Scientists suspect that when these new neurons are formed, they integrate networks of neurons already formed (this is essential for their survival), destabilizing them and thus causing the loss of certain synapses and therefore of the information they contained. 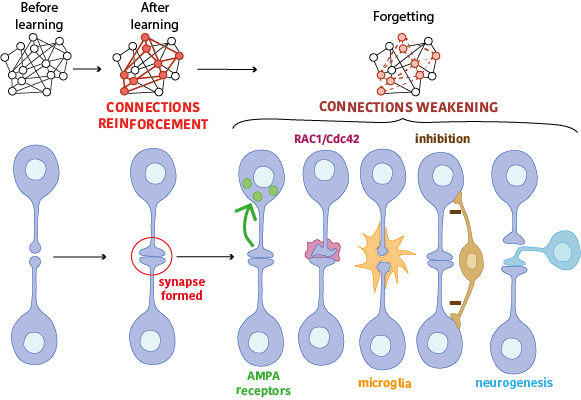 After learning, the neurons involved in the network storing the memory strengthen their connections in such a way that the activation of one of the neurons can easily reactivate the whole network and enable the memory. Over time, these connections weaken and it becomes difficult to reactivate the entire network and thus preserve memory. Different biological mechanisms are known to promote the destabilization of neuronal networks and therefore forgetting, such as the suppression of AMPA receptors at the synapse, the physical destabilization of synapses by the activation of RAC1 or Cdc42 proteins, the elimination of synapses by microglia, inhibiting neural networks or inserting new neurons into already established networks.

There are many pathologies associated with memory disorders. In the most severe cases of amnesia, as observed in the late stages of Alzheimer's disease or after heavy brain trauma, certain networks are permanently lost because part of the neurons that make them up has died. However, these networks simply become particularly inaccessible in most cases, as is the case in aging or epilepsy. On the contrary, certain diseases or syndromes such as the savant syndrome or post-traumatic stress are characterized by hypermnesia, an absence of forgetfulness.

People with PTSD usually experience intrusive lingering memories of the traumatic event, despite the passage of time. Studies in mice have shown that increasing the production of new neurons via neurogenesis in the hippocampus has the effect of promoting the forgetting of negative events. Moreover, in mice, increasing physical activity (known for its positive effect on neurogenesis) after learning promotes the forgetting of newly formed memories. Thus, this research opens interesting perspectives on the role of forgetting and its mechanisms in the development of new therapeutic avenues for the treatment of memory disorders.

Forgetting, like learning or recalling, is a stage of memory. Thus, there is no good memory without forgetting.

Forgetting is an active process by which our brain sorts out memories that are still relevant and those that are no longer adapted.

The absence of forgetfulness (hypermnesia) or the excess of forgetfulness (amnesia) are symptoms observed in several diseases or syndromes (Alzheimer's disease, post-traumatic stress disorder, savant syndrome)

Towards a better understanding of dyslexia

The birth of a thought