Tardigrades lie between arthropods (articulated legs) and nematodes (also called roundworms) in phylogeny (study of links between related species) and belong to the supertype of Articulata. In common parlance, they are known as water bears. Discovered over 230 years ago, more than 700 species are known to live on Earth, in freshwater and at sea. They are between 0.2 and 0.5 mm long. The first segment (part) of its body contains the head, as for the next four, there is a pair of legs, each ending in claws. They have a skin called the cuticle, common to insects, which in them is flexible, smooth or covered with thorns or plaques. They have a well-developed nervous system, sensory organs and eyes. 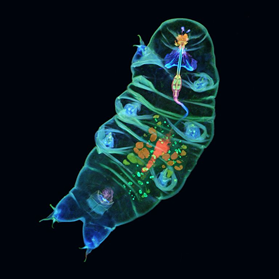 Diagram of the anatomy of a tardigrade

During their growth, these specimens molt. There are some transparent ones.

These aquatic bears can also be, depending on the species, hermaphroditic with or without a male female difference. Regarding their reproduction, it can take place internally (meeting sex cells in a tardigrade) or be external (meeting sex cells in the environment). All tardigrades are aquatic and require water to feed, move and reproduce. It is a common species that can be found on all continents.

The reasons why tardigrades are of such interest to scientists are partly related to their ability to survive in extreme environmental conditions: they can withstand lack of oxygen (anoxybiosis); floods, for that it inflates like a balloon; very low temperatures down to -272.95 ° C and survive for 20 hours and -200 ° C for 2 months; excess salt (osmobiosis), dryness (cryobiosis) by drying out and rehydrating when humidity returns. This suspension of their metabolism is called cryptobiosis. These living things are anhydrobiotics (able to keep their cells in dry conditions). During this mechanism, the tardigrades will retract their head and their eight legs to transform into a tiny ball. Microscopic photography with color reconstruction of a tardigrade in cryptobiosis. (Source: https://dinoanimals.com/animals/tardigrades-indestructible-animals/)

Some have survived in this condition for over 100 years, studies have shown. Tardigrades also tolerate very high pressures of up to 1000 atmospheres (this is a unit of measurement for pressure). In this cryptobiotic state, tardigrades are also resistant to toxic gases (carbon dioxide, hydrogen sulfide), ultraviolet light and X-rays.

It is therefore for all these reasons that tardigrades found themselves ideal candidates for an adventure in space for the first time in 2007. Resistance to space vacuum and its pressure, to ionizing radiation from the sun and to extremely low temperatures. .

So far, several missions have taken place. The first, in 2007, is FOTON-M3 with the TARSE project (The Resistance of tardigrades to the effects of Space). This project aims to analyze the impacts of stress by studying biological reactions and damage to DNA in space.

Another project of the FOTON-M3 mission, TARDIS (Les Tardigrades dans l'Espace). This made it possible to verify whether two species of tardigrades, Milnesium tardigradum (Doylère 1840) 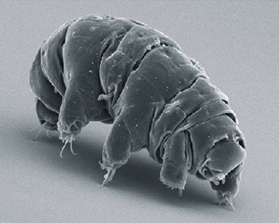 and Richtersius coronifer (Richters 1903) were able to survive in the vacuum of space.

In the same mission, the RoTaRad project (Rotifère, Tardigrades and Radiation) followed in order to study their survival and fertility during a long period of extreme stress. 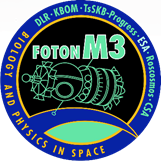 In 2011, the Endeavor mission saw the light of day with the TARDIKISS project, which broadened knowledge about the history of life and DNA repair mechanisms when exposed to the stresses of spaceship.

The last mission dates back to 2012, with Phobos, and the Phobos Life Project, which consisted in observing how a living organism could survive space flights for 34 months. Unfortunately, this mission was aborted following the crash of the vessel which fell and burned over the South Pacific Ocean on January 15, 2012. Despite this defeat, the tardigrades have a bright future ahead of them as space adventurers. It is planned, in fact, in the future, to study their ability to survive in the atmosphere stimulated by certain celestial bodies in the solar system (meteorite, satellite such as Titan, or other planets). Future studies are also being considered to find out if they would be able to survive on other planets or planetary satellites in our solar system. And finally, in another area of ​​expertise, tardigrades are also being studied in the context of cancer research in order to better study mechanisms that make it possible to keep our genes stable, and thus prevent genetic mutations at the origin. certain cancers.

Our impact on our genes