The spleen is an organ found in most vertebrates. In humans, it is located under the left side of the diaphragm, between the 9th and 11th ribs, parallel to their axis. It is a smooth, convex organ, located opposite the diaphragm, measuring between 7 and 14 centimeters long and weighing about 200 grams. Its size varies according to a person's height, weight and constitution, but not according to gender or age.

Parts of the Spleen

The spleen is similar in structure to a large lymph node and performs similar functions: it acts as a primary blood filter. It is divided into two parts: the red pulp, which makes up 78% of the entire organ, and the white pulp, a much smaller part that makes up about 22% of the organ.

The red pulp is made up of numerous splenic sinusoids (small capillaries through which blood flows) connected by Billroth's cords. Billroth's cords are connective tissue. They provide support and protection to other tissues. They contain a large population of monocytes and macrophages, the forces preserving our health against invaders, and serve as a sieve around the aforementioned splenic sinuses. Billroth's cords are therefore like the spleen's insulation, filtering out retiring red blood cells (senescent erythrocytes) that are not flexible enough to pass through its mesh. The number of our monocyte confined in the Billroth cords is greater than the number of circulating monocyte soldiers in the blood, which allows for rapid mobilization in the event of a strong external invasion of bacteria or viruses, also called an acute infection. The sinusoids are large vessels that eventually drain into the splenic vein. Together with the Billroth cords, they filter out abnormal or spent blood cells, delegating them to be devoured by macrophages. In addition, they also filter out cellular debris, thrombi and pathogens. The devoured red blood cells are recycled into hemoglobin. The globin part is degraded into its constituent amino acids, and the heme part is metabolized into bilirubin.

The white pulp houses several distinct regions, each with a unique function but always related to our body's defenses against an infection:

- The lymphatic follicles produce IgM and IgG2 antibodies, which can destroy bacterial capsids. They also contain B cells.

Macrophages are also present in the first two zones of the white pulp. They monitor the function of T and B cells and strengthen the defenses against potential infections. Together with the rest, they form a constantly adapting shield against all debris and foreign bodies in our blood. 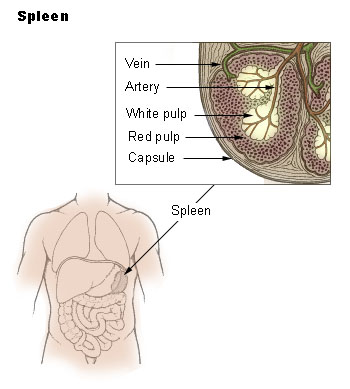 Figure 1: spleen location and distribution of the red and white pulp. The red pulp encompasses the white pulp, which has the benefit of mechanical filtration of blood in the red pulp, followed by the immune cell activation in case of bacterial or viral incursion, leaving the blood filtered and clean to be delivered to the heart. Illustration by Free Wikimedia.

Unlike other gut organs, spleen develops from the mesenchymal tissue, which usually forms skin, bones and blood. It, however, shares the same blood supply as the rest of the gut organs.

While bone marrow is the primary hematopoetic site in adults (site for generating blood cells), the spleen is performing this function until the 5th gestation month. The erythropoetic functions of the spleen cease completely after birth, but it retains the ability to produce lymphocytes, supplying the lymphic system.

By the virtue of red pulp's synusioids, the spleen stores around 30% of the body's red blood cells, and up to 240 ml of blood, which can be released instantaneously, in case of a life-threathening event, such as hypoxia or blood loss. This feature is preserved from the earliest developmental days.

As much as scientists know about the spleen and its functions, there are still questions to be answered. Little is known about the spleen's transition from producing red blood cells in the early embryo, to its function after birth. Moreover, the origin of spleen's immunogenic cells is also still a mystery.

One of the most devastating conditions affecting the spleen are tumors, especially because its connections to the immune system. There is still no uniform test or procedure that could reliably and rapidly tell if a person's spleen is affected with an early stage tumor, when it would still be treatable without major issues. The current tests all rely either on blood testings or on physical exam by palpitation, with imaging tests such as CT scan being the last resort. New, uninvasive diagnostic tools are being developed to have a better overview of the spleen's condition, its function and fate.

The spleen works tirelessly as a sieve against all pathogenes and cellular debrees throughout the entire life. It is the largest lymphatic organ in the human body, and, barring traumas, rare diseases and tumors, produces a whole array of antibodies, lymphocytes and other immunological cells that help not only with blood filtering, but also with combatting infections throughout the whole body.